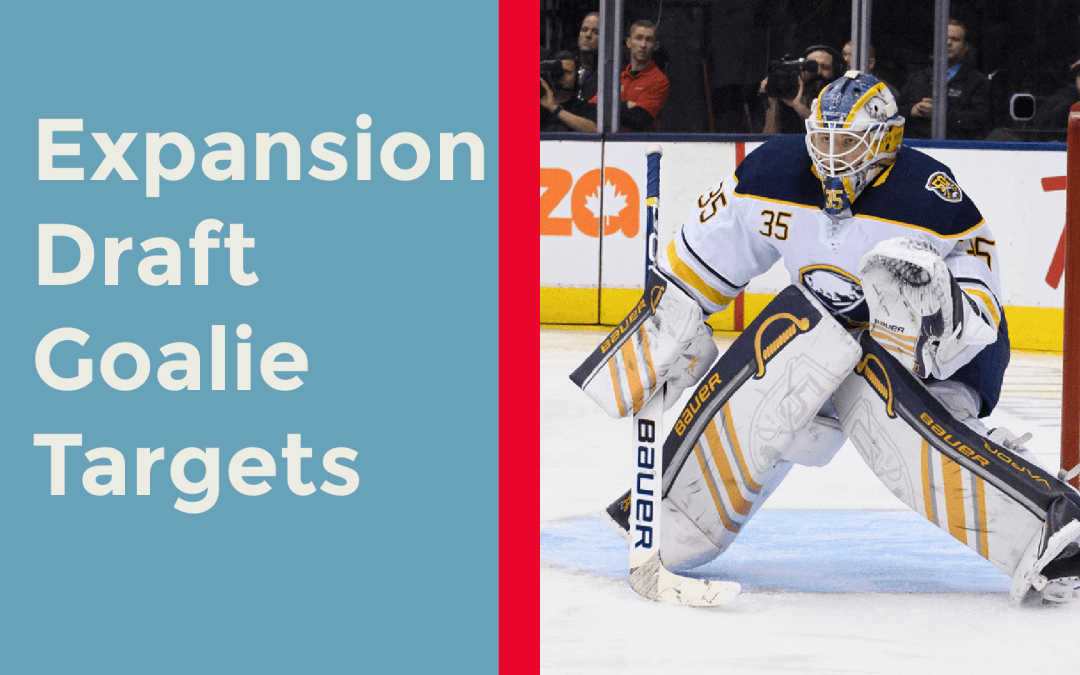 With the Expansion Draft a mere five days away, the Seattle Kraken’s goaltender selection is anyone’s guess. There are a handful of quality options out there but still no clear favorite at this point.

The rules require the Kraken to select at least three goalies in the Expansion Draft. There are roughly 30 options for the Kraken to choose from on Wednesday, so to make sense of the options, I have tiered all the likely goalies available.

Bona fide starter – These are goalies that are proven starters in the league and can still bear the weight of 50+ regular-season games.

Veteran platoon – This is a group that consists of goalies over 29 years old that are best utilized if they can share the goaltending duties at roughly a 50/50 split at this point in their career.

Potential, but with risk – These goaltenders have shown potential to play at a high level but have not played a whole season as a starter or are just breaking into the league. They show promise, but it is unknown if their play is sustainable as full-time starters in the NHL.

Solid backup – Players in this category have proven to be reliable backups in the NHL. They could be used in an expanded role in case of injuries to other goalies on the team but should not be relied upon for extended workloads.

Here is a look at the goalies most likely available by category.

Linus Ullmark (BUF) and Philipp Grubauer (COL) are the cream of the crop of available goalies in the Expansion Draft. Both are pending unrestricted free agents with no guarantee they will sign with Seattle, but one of them may be worth pursuing during the exclusive negotiating window.

Grubauer will more than likely attract more suitors in free agency and might be a bit of an overpay for a goalie that will turn 30 next season.

Ullmark, if unprotected, is the most desirable goaltender available to the Seattle Kraken. He is a bit younger than Grubauer and has one of the best high/medium/low danger save percentages at five-on-five across all available goalies. Seattle might be willing to sign him to a longer term. Kraken goalie scout Andrew Allen has a lot of familiarity with Ullmark as well from their time together in Buffalo.

Cam Talbot (MIN) is the only other candidate in this group that would have a reasonable shot at playing for Seattle next year. At 34 years old, he carries some risk, and we still don’t know for sure if he or Kaapo Kahkonen will get protected.

Frederik Andersen (TOR), also a pending UFA, dealt with injuries this year and probably carries too much risk at this point in his career.

Tuukka Rask (BOS) is a pending UFA and will likely re-sign with the Boston Bruins.

Matt Murray (OTT) has had two years of below-average numbers, and the Kraken will have better options out there.

Potential, but with risk

This category gets a lot of media coverage because these goalies showcased well over the last season. The Kraken would be taking a big gamble if they are expecting a goalie from this category to get most of the starts for the 2021-22 season.

Of all these goalies, Adin Hill (ARI) is the most likely candidate to be drafted in the Expansion Draft. Hill is a big goaltender who is just starting to break into the NHL as a regular with 19 games played in the 2020-21 season. There are a few scenarios where he is not even available. The projected protected goalie in Arizona is Darcy Kuemper, who has been rumored to be on the trading block for the last two offseasons. Arizona may trade him before the rosters are locked on Saturday, or they may choose to protect Hill over Kuemper, since Kuemper only has one more year remaining on his contract.

Chris Driedger (FLA) is a trendy pick from the Florida Panthers, but he is a pending UFA and only has 35 games played over the last two seasons. He could pan out, but he could also be the next Scott Darling.

Vitek Vanecek had strong numbers in his first year in the NHL. He played 37 games for the Capitals with a .908 save percentage. There are questions if his long-term upside matches those good numbers, making him a pick with risk.

Joey Daccord (OTT) and Anton Forsberg (OTT) could be even riskier options. Both goalies had limited views playing for a relatively bad team. Forsberg had a heck of a journey this past season, as he bounced across three different teams before ultimately finding a home in Ottawa late in the season.

Having a veteran platoon goalie is not a bad bet for year one of the franchise. One of the two can probably do some heavy lifting if the other falters, or they could be a stable support system for some of the younger goalies just breaking into the league.

31-year-old Jake Allen (MON) could fit the bill relatively well. Allen is a good backup goalie that can get a healthy dose of games throughout a season, but he is not a goalie that you want as your primary goalie. He would be a great fit to pair with a younger goalie such as Adin Hill or Vitek Vanecek.

David Rittich (CGY) could also be an option, but he’s an unrestricted free agent.

The only scenario in which I see Seattle drafting a goalie from this category is if their primary goalie is Ullmark, Grubauer, or Talbot. With a solid starting netminder, the Kraken would just need a decent backup that can give the starter a day off from time to time.

There are a lot of variables at play for the Kraken’s goaltender selections, which still makes forecasting the selections extremely challenging. It is also important to realize that the team could make a post-draft trade or sign another goaltender in free agency to shore up the position. Who Seattle ends up choosing to man its inaugural goalcrease remains anybody’s guess.