Flurry of trades and buyouts before Expansion Draft – Weekly One-Timers 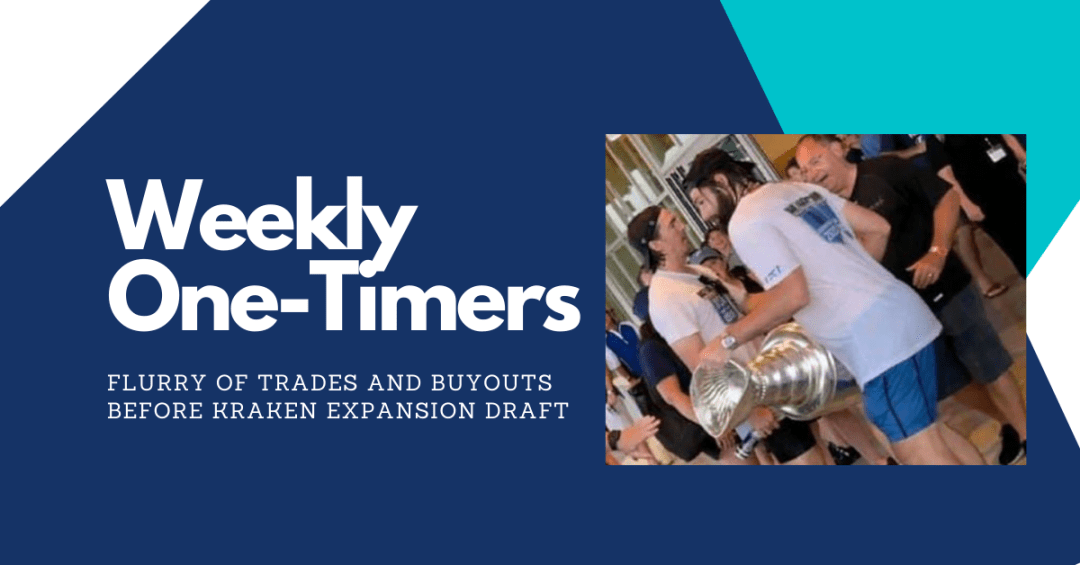 It’s been a long road. Dating back to our NHLtoSeattle days, we’ve been daydreaming, prognosticating, and even occasionally arguing about what will happen on Wednesday, July 21. Despite all the things that have happened in the world the past couple of years, many of which certainly could have derailed this process, here we are, Seattle. We are standing at the precipice of the Kraken—OUR Seattle Kraken—finally fielding a team for the first time ever.

Come Wednesday evening, the organization will have 30 players from which it can create the bulk of its inaugural roster. In case you somehow missed the news, the festivities will kick off from Gas Works Park on the north end of Lake Union at 3:30 p.m. Pacific that day, with national TV coverage beginning at 5 p.m. on ESPN2.

It is a private, ticketed event, but even if you aren’t able to get in, you can boat, sail, paddleboard, kayak, swim, diaper float (my personal favorite mode of water floating), hydrofoil… whatever it takes to get yourself in on the action. A stage will be erected on the shore of the lake, and a massive floating screen will be propped up on a barge to show the proceedings. So get out on the water, and you should be able to—at least in some way—be a part of this historic event.

It’s no surprise that there has been a flurry of trades, buyouts, and signings this week in preparation for the Expansion Draft. General managers across the NHL are making their last moves to prepare their teams for next week’s league-wide ceremonial sacrifice to the hockey gods (and by “hockey gods,” we of course mean the Seattle Kraken).

The biggest bombshell came from my own Minnesota Wild, who opted to buy out the contracts of not just Zach Parise, but also the still very effective Ryan Suter, Parise’s partner in crime. The move means that Minnesota can now certainly protect Matt Dumba, making Carson Soucy, Kaapo Kahkonen, or Victor Rask (I personally doubt that last one will be the choice) the most likely targets, assuming the Wild do protect Cam Talbot over Kahkonen.

Meanwhile, the Florida Panthers—who arguably had the worst go of any team in the league in the Vegas Expansion Draft—bought out ironman defenseman Keith Yandle and re-signed Anthony Duclair. The Avalanche traded away an obvious Expansion Draft candidate in Ryan Graves, and Dallas’ Ben Bishop, Colorado’s Erik Johnson, and Buffalo’s Jeff Skinner all waived their no-movement clauses to give their respective teams an additional protection slot.

More such news will certainly trickle in over the next two days, as teams are required to submit their protection lists on Saturday.

This is going to be an incredibly fun few days; a period of time that we have been patiently awaiting for literal years. We just hope everybody has a good time.

By the way, this is a complete guess, but since the Kraken will be naming their players and are allegedly trying to get at least some of them to attend the Expansion Draft selection show in person, wouldn’t this be a great time to give us our first glimpse of the team’s jerseys? Again, no insider info here. It’s just a guess that I’m putting in writing so that I can either be lauded or shamed for a correct/incorrect guess in a few days. We shall see.

We at Sound Of Hockey were devastated to learn of the passing of 24-year-old Columbus goaltender Matiss Kivlenieks on July 4 after an errant firework hit him in the chest at a party in Michigan. His memorial service was held on Thursday.

Goaltender coach and close friend Manny Legace reportedly shared stories of his close bond with Kivlenieks and joked that even John Tortorella was in attendance at the funeral, which was a big deal because, “He hates goalies!”

RIP Kivi. You’re gone way too soon, but the hockey community will never forget you.

Robert Morris University has reversed course on its plans for demolishing its men’s and women’s hockey programs. You may recall that the school put out one of the worst press releases in the history of press releases to declare the programs dead, but the regents have now stated that as long as they can raise $7 million over the next five years, they can keep the programs alive. I, for one, really hate this tactic of forcing hockey programs to raise millions of dollars to survive budget cuts from schools that have promised scholarships and four years of Division I hockey to their athletes, but that’s just me.

It was announced in May that the Utica Comets, Vancouver’s AHL affiliate, would be moving to Abbotsford, British Columbia, in time for the start of the 2021-22 season. What wasn’t known before Thursday was what the top minor league club for the Canucks would be called going forward. Now we know that the team will be named… [drumroll]… the Canucks! That’s right, the Abbotsford Canucks, ladies and gentlemen! How original! Sarcasm aside, their jerseys will be green and will prominently feature the famed Johnny Canuck, which we at SOH wholeheartedly support.

Speaking of jerseys and logos, the WHL’s Vancouver Giants and Portland Winterhawks both revealed some new branding this week. Vancouver has a very sharp new black, gold, and red uniform, with a rather dashing and burly gentleman’s face for the crest. Portland showed off its new logo, which replaces the controversial Blackhawks-esque Native American silhouette that it had used for the entirety of its 45-year history. Instead, the Winterhawks will now sport a hawk with an image of Mount Hood cleverly factored in.

We do have one question about the Giants’ logo, though. How are we to know that the face on the jerseys is actually that of a giant? There’s nothing around it to give it scale, so as far as we’re concerned, they’re just the Vancouver Bearded Faces.

Earlier this week, the Tampa Bay Lightning held their second Stanley Cup boat parade in as many years. Two of the highlights were this very minor mishap…

…and this young woman who dressed up as Patrick Maroon and got a big reaction from the Big Rig.

Finally, let’s give it up for friend of the Sound Of Hockey Podcast and former Seattle Thunderbirds equipment manager Jason Berger, who apparently brings the f***in’ heat when it’s needed most.

Congrats on your second ring, Jason.