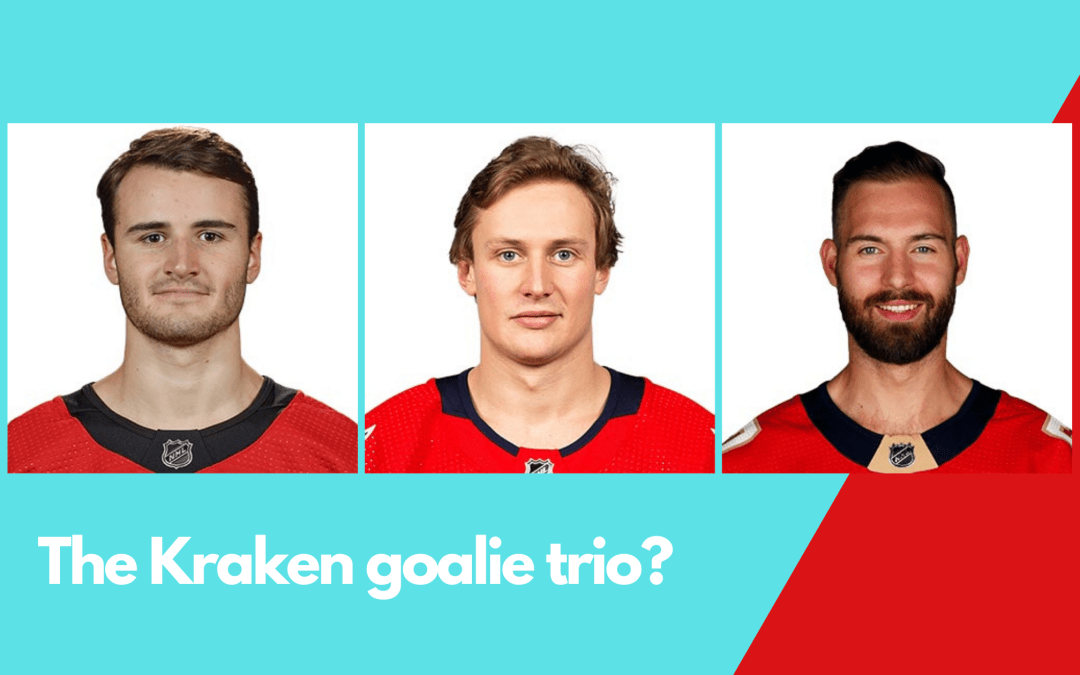 Things have played out in a slightly anti-climactic fashion for the Seattle Kraken Expansion Draft. As draft day has progressed, we have seen—at least reports of—every name selected by the team. Included in the list of names apparently chosen are three relatively young goaltenders in Chris Driedger, Vitek Vanecek, and Joey Daccord.

The fact that there isn’t a bona fide No. 1 starter in this mix tells us that there still may be a veteran signing later in the offseason or that one of these goalies could be flipped, but we thought this would be a good opportunity to dig in and learn what the Kraken have—at least for now—as their trio in goal.

We at Sound Of Hockey have had Driedger, 27, tabbed as a potential Kraken candidate for many months. He had a bit of a breakout with the Florida Panthers this season, and with $10-million-per-year netminder Sergei Bobrovsky faltering at times, Driedger came in and really saved the season in a lot of ways.

As an unrestricted free agent, the Kraken were able to negotiate with the Winnipeg native in their 48-hour exclusive negotiating window and will now select him as their choice from the Panthers. Elliotte Friedman reported on Monday that the Kraken were closing in on a deal with Driedger for three years and a $3.5 million cap hit per year.

His basic stats are quite impressive in a relatively small sample size. In 38 regular-season NHL games, Driedger boasts a 21-9-4 record with a 2.09 goals against average and .929 save percentage. He did have one stinker of a start in Florida’s first-round playoff loss to the Lightning, but on the whole, Driedger really has a pretty sparkling NHL record.

Before joining the Panthers, Driedger appeared in just three total NHL games over three seasons with the Ottawa Senators, with all of his appearances coming in relief scenarios. In seven AHL seasons, he has 139 career games under his belt, with a 62-58-11 record, and slightly less sterling numbers at a 2.84 GAA and .913 save percentage.

We love this pickup. Despite the allure of the open market, Driedger forewent the opportunity to speak with other teams and will instead join Seattle as one of its first backstops. It’s also easy to root for a guy that has managed to grind out an NHL career late in his twenties after stops in the WHL, ECHL, and AHL. Let’s hope that his success in 2020-21 wasn’t just a flash in the pan, because indications are that he could grow into a true star in the league.

There are some similarities between Vanecek and Driedger, at least in the recent term. Vanecek also emerged this year as an NHL goalie who wasn’t previously on the radar. A 25-year-old rookie who hails from Havlickuv Brod, Czech Republic, Vanecek surprisingly seized Washington’s goal crease for a lot of the season.

Ilya Samsonov was expected to have full control of the net in Washington, but had injured his neck and back in an ATV accident in the summer of 2020. When he returned at the beginning of this past season, he wasn’t particularly outstanding, and Vanecek ended up snagging the lion’s share of starts during the season. In all, Vanecek went 21-10-4 with a 2.69 GAA and .908 save percentage in the regular season, but then gave up four goals before pulling or straining something in his lower body in his lone playoff appearance.

Again, we at Sound Of Hockey are not surprised by this selection, and we do love the upside and very reasonable cap hit for somebody who has proven ability to play at the NHL level.

The situation with Daccord is a bit different than the other two goalies in the current trio. While he is a touted prospect, he has yet to really demonstrate his abilities at the NHL level. At just 24 years old, there’s still plenty of development time left for him, however.

A fun fact for Daccord, he is the first ever Arizona State Sun Devil to play in the NHL. He also made headlines last season when he gave a fantastic and emotional post-game interview after his first NHL victory.

It was our expectation going in that the Kraken would have a more proven veteran as their starter in year one, along with two younger goalies to compete for the second spot on the NHL roster. That isn’t quite how this thing has played out so far, but there are still some veteran unrestricted free agents out there, like Linus Ullmark and Petr Mrazek, among others. Still, we like the choices so far.

What do you think, Kraken fans? Are these the goalies for the inaugural season?