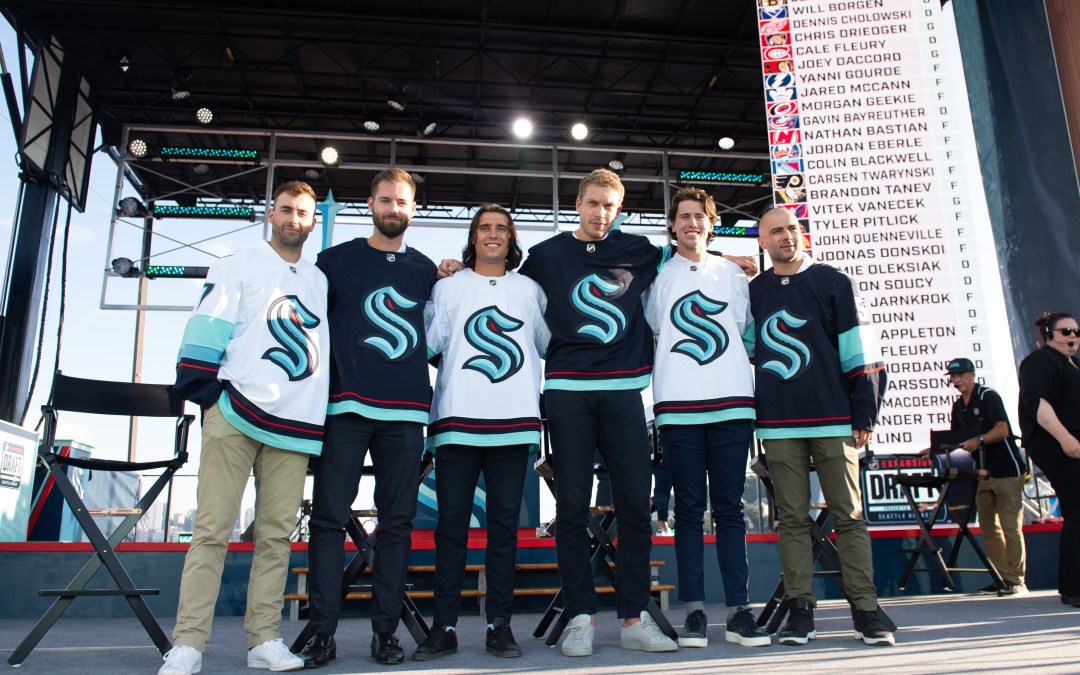 What a week it was. The Seattle Kraken held an Expansion Draft, participated in an NHL Entry Draft, and signed some UFA’s all in one week. It probably was the busiest week the Kraken will ever experience.

A lot happened, starting with the Expansion Draft held at Gas Works Park.

The anticipation was high thanks to some of the big names that were left exposed to the Kraken. On top of that, the hockey world expected so many side deals that Seattle was going to have a bucket of extra NHL Draft picks – yes, they keep those in buckets.

Well, the party was fun, but we didn’t get big-name vets nor extra draft picks.

That led to the NHL Entry Draft where Seattle had seven picks and selected seven players. Matty Beniers was the prize, and Seattle snapped up a great player up with the No. 2 pick.

When the week ended, the Kraken had a full roster of players, seven new prospects, and a ton of cap space to keep tinkering with the roster. Here’s a look back at the week that was.

We didn’t get the side deals we were hoping for, and Ron Francis didn’t spend all his money loading up on veterans with big contracts. In the end, the Kraken went young.

Seattle has two players over 30 years of age – Jordan Eberle (31) and Mark Giordano (37) – and 17 who are 25 or younger. The defense looks solid with Giordano, Adam Larsson, and the big Jamie Oleksiak. Up front there are solid vets like Yanni Gourde, Eberle, Joonas Donskoi, and Jared McCann. Most of the scoring is on the wings, and at first glance, the Kraken are a bit of a donut team – missing centers.

But before we start planning for the 2022 NHL Draft lottery, let’s wait to see the finished product.

“We’ll see what things happen here over the next few months, but you know we like to say this is kind of a snapshot in time,” Francis said following the Expansion Draft at Gas Works Park. “There’s still opportunities. We’re going to draft on Friday night with the second pick overall and we might get a guy that can step into our lineup.

“Then on Monday, you have the qualifying offers that are necessary for restricted free agents and there might be some guys that shake loose. We certainly will be looking at free agency next week and then, you know, as you go through the summer there are teams that have to get cap compliant to start the season. We have some cap space, and we’ll look at taking advantage of that if we can.”

Francis has over $30 million in cap space available to him on Tuesday, the day before NHL free agency opens on Wednesday morning. That doesn’t mean he’s going to go on a shopping spree by throwing money at every top free agent on the market, but there will be additions to the roster.

Only three teams have more cap space and two of them – Detroit and Buffalo – are in serious rebuilds and are unlikely to be big-time buyers this week. Seattle will be able to offer a potential free agent more money than their competitors.

On top of that, the Expansion Draft show at Gas Works demonstrated to the league how amazing Seattle is and how rabid the fans are before one puck has been sent deep. The Kraken should be attractive.

Getting playing time and stepping up

Joining an expansion team means some players will be getting more playing time and will be put in better positions than with their previous teams. Example No. 1 is William Karlsson with the Vegas Golden Knights.

When Vegas selected Karlsson from Columbus, the center had never scored more than nine goals in any season. Year one in Vegas? 43.

That’s not to say that Seattle has a Karlsson sitting on its roster now, but there are some players who could benefit from more minutes in an elevated role.

One player to watch here is Morgan Geekie.

Playing mostly in the bottom six on a talented Hurricanes roster last year, the 23-year-old center scored just three times along with six points. But he’s scored every other stop in his career. In junior, with the Tri-City Americans in Kennewick, Geekie had back-to-back 30-plus goal seasons before turning pro.

In the AHL, he has two full seasons with the Charlotte Checkers in which he scored 19 and 22 goals respectively.

He has a chance in Seattle to move up the forward rotation.

Geekie was relegated to just under 10 minutes a game last season and only generated .8 shots per game. But, in the AHL when he was a top-six player in 2019-20 – his best year – he produced 2.34 shots a contest and shot an impressive 17 percent. In his rookie year in the AHL, he shot 20 percent.

The kid can shoot.

Even in his limited role last year in the NHL he shot a healthy 10 percent.

His underlying numbers with the Hurricanes last year are also encouraging as he was a positive possession player and had an expected goal (xG) percentage of 52 percent.

What will his offensive numbers be if he gets 15 or 20 minutes a game with the Kraken?

There was not a whole lot of drama at the top of Friday’s NHL Draft. Buffalo took Owen Power as nearly every single person predicted, and that cleared Seattle to select Michigan center Matty Beniers.

It’s an exciting pick. Not only is he the first Kraken drafted but he’s a player that checks off a lot of boxes. He can score, play defense, and make his linemates better.

“I think what tipped the scales into his favor is his unbelievable enthusiasm and work ethic,” Kraken director of amateur scouting Robert Kron said. “He’s got a never quit attitude and his energy level is very high at the beginning of the shift or late in the shift. He plays a very strong game in all three zones, and on top of that will show that he’s got incredible offensive upside as well.”

Beniers was also part of history as never before had two teammates gone first and second overall. By the end of the night, Michigan had four players selected over the first five picks. That includes Luke Hughes, who will be a freshman at Michigan next year.

With a loaded lineup, the Wolverines could be favorites to win the Frozen Four. That is, of course, assuming all four guys come back to college which is now the big question for Seattle. Will Beniers sign before the season or return for one more college year and sign with the Kraken in the spring?

“Honestly, I really don’t know what exactly the best thing is for me next year,” Beniers said Friday in the Zoom call with media. “Whether it’s going back or going to play for the Kraken.

“Obviously, I think that’d be really exciting to get to play with the Kraken. I think going back another year to keep building confidence [would be important] … But I think at the end of the day it’s what is the right thing for me to do as a hockey player and as a person?”

You have to love that maturity.

Will Beniers eventually wear a ‘C’?

Leadership is a big thing in hockey and the captain holds a special place within a team. Beniers has been praised by scouts as a leader with the Michigan team.

He was impressive in his press tour after the draft and has ‘future captain’ written all over him. There are different types of leaders. Some will be vocal, with a lot of yelling and screaming and maybe smashing something, while others will lead by example.

Both can be effective if the right guy is in place.

“I’m grateful that other people see me as a leader,” Beniers said. “I think for me it’s just being a guy that people are going to approach. It’s setting the example for other guys, whether it’s off the ice, on the ice, or in the locker room.

“For me, the way I lead I think it’s not as much talking, saying things people already know. It’s kind of going out there and showing them, showing them by example, lead by example, and doing the hard stuff out there. Hopefully, guys will follow, and I think that’s how to build really good team chemistry.”

What a great answer.

If you watched and managed to stay awake during the unbearable length of NHL Draft day two, you saw the Kraken select six more players in rounds two through seven.

Perhaps the most intriguing pick for Seattle came in the third round when the Kraken selected center Ryan Winterton from the OHL’s Hamilton Bulldogs. The OHL did not play last season due to COVID-19 which meant Winterton had no film or live viewings to impress scouts until he played seven games for Canada at the U18 World Championships.

He did play in 53 games as a 16-year-old for Hamilton in 2019-20 and scored 12 goals and 23 points which are impressive numbers for a rookie in the OHL. It’s one of the more fascinating aspects of this year’s draft as amateur leagues were up and down, shortened, and in Winterton’s case, canceled.

But, reading the wrap-ups from the myriad of draft experts, Winterton is a guy that consistently was praised by those that have seen him play as a great pick by the Kraken. So, tune in to some Bulldogs games this coming season.

Best moment of the week that was for the Kraken

There was so much good that went down over the past week in Kraken land. They have a roster and at the Expansion Draft party, there were six actual NHL players wearing actual Kraken jerseys. It doesn’t get much better than that. It’s what we’ve been waiting for.

But, the best moment of the week was witnessed by just a handful of people.

Just prior to the Expansion Draft show starting, NHL Commissioner Gary Bettman held a pre-draft media scrum with the local press. The scrum was held behind the stage right at the Lake Union water’s edge. The handful of reporters and television cameras attracted the kayakers and boaters that were out enjoying the sunny weather.

As is tradition, the kayakers booed Bettman. Always willing to play the heel, Bettman turned around and yelled to the booers, “That just proves that you are true hockey fans.” The result? The boos turned to cheers and a ‘Gary!’ chant broke out from the kayakers, paddle boarders, and a nearby boat.