How does the Seattle Kraken roster actually stack up against the NHL? 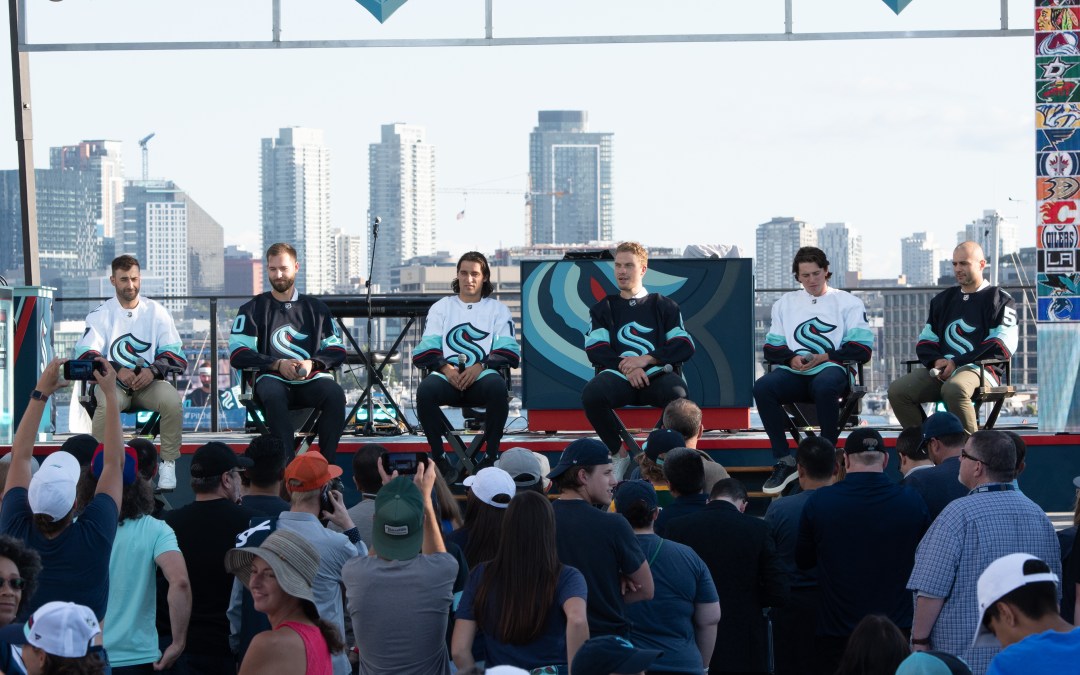 The last week and a half have been bonkers for the Kraken and their fledgling fanbase. Thirty players were selected in the Expansion Draft, three of those were traded away, seven prospects were taken in the NHL Entry Draft, and three significant unrestricted free agents were signed. There will come a time in the near future when we will feel the need to analyze and dissect every transaction that involves a Kraken player. But with things happening in such rapid succession, we really haven’t had a chance to take a step back and consider what the Seattle Kraken actually have in their initial roster.

So, let’s give it a gander, shall we?

Now, this is obviously just our guess at how things will shake out. Yanni Gourde had surgery and is expected to miss a month or two, so already the Kraken may have a spot for a guy like Alexander True out of the gates, though we think more forwards will be added before the season starts.

Impressive at defense and goalie, better than people realize at forward

The depth on defense is impressive. We see Haydn Fleury and Jeremy Lauzon as interchangeable options on the third pair, but both of those guys are legit NHL players who played as many as 25 minutes on a given night this past season. We also list Cale Fleury as being on the outs, but he played 41 games for Montreal as a 22-year-old, so he will get a look in training camp. He’s also a right-shot defenseman, which is valuable, as he is one of just three on the Seattle Kraken roster (Adam Larsson and Will Borgen are the other two).

With Philipp Grubauer taking over the starting spot in the goalcrease and Vitek Vanecek sent back to Washington, the Grubauer/Chris Driedger tandem looks to be one of the better batteries in the NHL. Combined, the duo had a regular-season save percentage of .924 in 2020-21, which legitimately puts Seattle at the top of the league if they both put up comparable numbers. So, with all that, it’s pretty easy to imagine the Kraken being a difficult team against which to score.

“I think our D corps is really good,” Grubauer said on Friday during his media availability. “Forwards too. With [Jaden Schwartz], some experience in the forward section there, so it’s going to be really interesting what system coach puts in place, and we’ve got to find our identity as a team too. The team looks great on paper, but obviously you’ve got to play and create some chemistry, and I think it’s a young team so really looking forward.”

Even with the free agent signings of Schwartz and Alex Wennberg, though, the prevailing theory seems to be that the forward corps is thin and won’t produce enough goals. There is a good group of secondary- and tertiary-type scorers in guys like Gourde, Jared McCann, Calle Jarnkrok, and Joonas Donskoi. That should bring a balanced attack throughout the top three lines, regardless of how head coach Dave Hakstol draws it up. But without high-octane scoring leaders, can Seattle get enough offensive production in a score-by-committee approach?

I’m no data guy, but let’s look at this from a slightly more analytical angle, rather than just straight-up eyeball testing it. The 12 forwards and six defensemen that we have slotted into the above depth chart (let’s assume the last spot on the blue line goes to Haydn Fleury just because he has more NHL experience than Lauzon) combined for 168 total goals in the shortened 2020-21 season. That sounds weak, right?

Well, actually, if the Seattle Kraken had played this past season and those 18 players had made up the entirety of their roster and produced that exact same amount of goals, they would have landed even with the Boston Bruins in a tie for 14th place in the NHL.

That’s an oversimplification because there are myriad factors that we are not taking into account that would skew things in both directions. For example, Wennberg was playing on a very good line with Jonathan Huberdeau and Patric Hornqvist, so perhaps his numbers were skewed up. Schwartz missed 16 games and only managed eight goals after scoring 22 the year before, so we would imagine that his production was skewed down.

The point is that although the first glance may tell you there isn’t enough firepower in the forward group, it does feature a pretty good contingent of guys who consistently score 20+ goals in the NHL. If you put enough of those guys in one lineup, they collectively produce at a pretty good clip.

How will intangibles factor into the Seattle Kraken roster?

We also can’t forget about the intangibles. It’s no secret that Ron Francis and company have been focused on finding “character” guys and players who never quit on a play, and they have been successful in this endeavor. How that factors into the team’s success remains to be seen, but things like that do have an impact.

“I think everybody kind of has a little bit of the same makeup,” said Kraken forward Colin Blackwell during a Zoom call with press on Friday. “A lot of guys have talked about just what a good group of character guys it is, and I can’t tell you how far that goes in the game that we play, bringing in a bunch of good guys.”

“The roster is shaping up really well,” Blackwell added. “We’ve got a lot of guys that are kind of like myself, guys that can play up and down the lineup. We’ve got a good mix of some young, really good players, some people that are really hungry and maybe have only played one or two years under their belt but have a lot of potential and can really turn into some great players. You have a great mix there, and it starts with goaltending and the goaltending that we got is really good… So I think the roster is looking awesome. I’m extremely excited about it.”

Will the Kraken be the top-scoring team in the league? Absolutely not. But they’re going to score enough to get by, their defense appears very solid, their goaltending looks outstanding, and their compete level should be quite high. Let’s not forget, there’s still plenty of cap space to add either before or during the season, so Seattle is in a pretty good spot here.