Leader of ‘Save Seawolf Hockey’ optimistic with UAA deadline looming 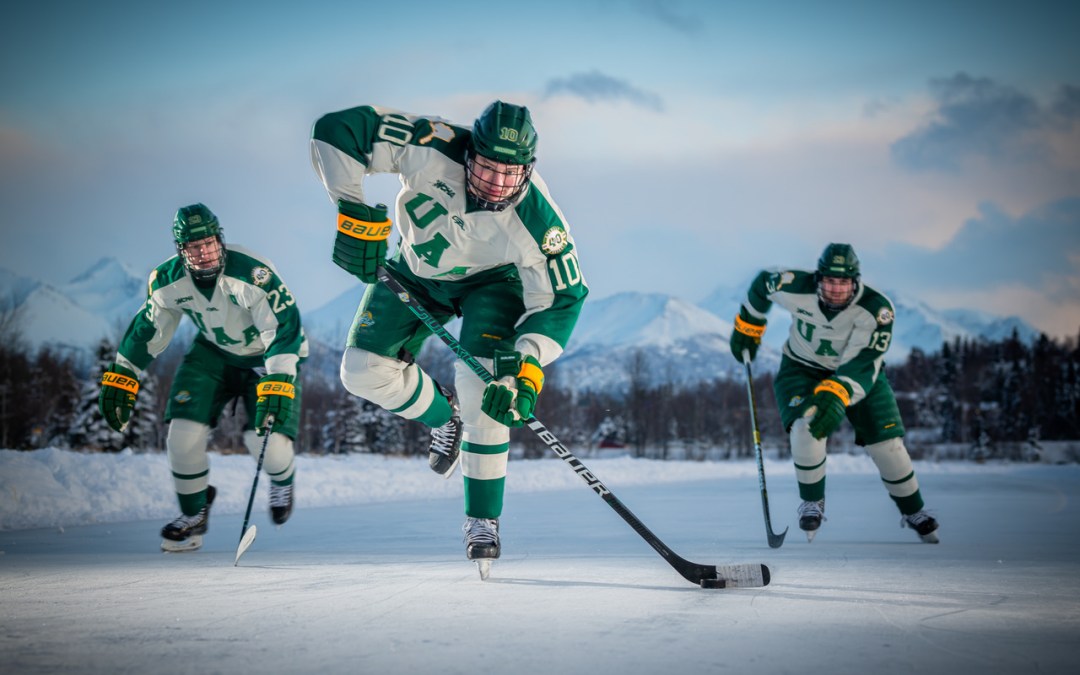 Save Seawolf Hockey still needs your help to reach its goal of $3 million to rescue the University of Alaska Anchorage hockey program before its August 30 deadline. To donate or pledge money to the cause, visit saveseawolfhockey.com or text “UAAHOCKEY” to 41444.

It’s been a year since the University of Alaska Anchorage announced that it would cut its men’s hockey program, along with women’s gymnastics and men’s and women’s downhill skiing, to save itself approximately $2.5 million per year amid massive state funding cuts. Now, a grassroots “Save Seawolf Hockey” campaign is on the verge of rescuing the hockey program from what once appeared to be certain extinction.

The chairperson of Save Seawolf Hockey, Kathie Bethard, is a mother of three former NCAA Division I athletes, including a Colorado College hockey player, a UAA hockey player, and a University of Texas soccer player. She’s had a long career as a computer programmer and technology trainer, a work life that really has had nothing to do with college hockey.

Instead, she developed a love for the sport when her oldest son first started playing minor hockey in Anchorage at age four. That led to her joining the UAA booster club for the program’s first-ever season, some 42 years ago, and she’s been involved with the club—including serving as the president of its board for six years—in various capacities ever since.

But that involvement with UAA really isn’t what made her the right person to lead this campaign to save her beloved Seawolves. Instead, it was her willingness to simply stand up and do something when it looked like the program would be lost.

“I guess because I said, ‘We can’t let this happen,’” Bethard explains. “People were willing to rally around that cry, jump on board, form a committee, start a grassroots campaign.”

One year ago, UAA announced plans to cut the hockey program

When then-chancellor of UAA Cathy Sandeen announced the school’s plan to eliminate hockey, gymnastics, and skiing in August, 2020, it caught Bethard and the rest of the hockey boosters completely by surprise. In fact, the team itself was only given a two-hour notice before the announcement to gather the players together and let them know what was happening. It was a devastating blow for everyone involved.

“I was just astounded that they could do that with no warning to the public and especially the boosters who have supported this team for 42 years,” recalls Bethard.

She was simply unwilling to accept that fate for the Seawolves and the countless members of the Anchorage community who had supported them over the last four decades, so Save Seawolf Hockey was born.

It started with a write-in email campaign that brought an overwhelming response to the school’s board of regents. That operation eventually led to an agreement by the university that if any of the three sports being axed could raise two years’ worth of operating expenses, then that individual program could be reinstated for the 2022-23 season. For hockey, the annual operating budget is $1.5 million, so a goal of $3 million was set.

While most would see raising $3 million as an impossible task, Bethard and her comrades recognized that now there was a legitimate path to saving the program. “We took that and ran with that. $3 million is a lot of money to raise, but we were really optimistic at first because we had clear plans as to what we were going to do.”

The pandemic put a wrench in fundraising plans

Making things even more daunting for Save Seawolf Hockey was the ongoing COVID-19 pandemic. Though fans couldn’t attend, the organization still planned to utilize TV broadcasts to facilitate “split the pot” raffles and silent auctions during games as relatively surefire ways to raise funds.

They also figured there would be heightened public interest in the Seawolves during the season. Whether the team survived the budget cuts or not, 2020-21 would be the program’s last run in the storied WCHA. The conference had voted to disband so that seven of its member teams could leave to re-form the old CCHA, cutting out UAA, Alaska Fairbanks, and Alabama Huntsville and leaving those three without a conference.

The increased public interest and fundraising opportunities quickly evaporated when Sandeen announced in November that all winter sports would be canceled, citing, “The health and safety of our student-athletes, coaches, and athletics staff.”

Bethard and her committee did get creative. They held their raffles and auctions virtually and hosted a youth tournament, “The Seapup Cup,” in conjunction with an outdoor alumni game between UAA and in-state rival UAF. That’s when the Seattle Kraken got involved, a real turning point in the process.

Kraken fans likely saw some of the marketing that the team did back then on behalf of UAA, trying to get people to donate money and leading the way financially with significant donations from the team’s ownership group. But the support didn’t stop with just donations and a few announcements.

Even now, public service announcements are playing on ROOT Sports in Alaska thanks to Kraken CEO Tod Leiweke and his connections to the network that will eventually air Seattle’s games throughout the northwest.

Closing in on their goal

Save Seawolf Hockey was originally given a deadline of Feb. 15 to reach its $3 million fundraising goal. That date has long since passed, but when it came and went, the school’s board of regents recognized the real progress that had been made—the group at that time had raised $1.8 million—and unanimously approved a motion to extend the deadline to Aug. 30.

So here we are, just 11 days away from that extended deadline. Where does Save Seawolf Hockey sit? “We’re at $2.65 [million] as of [Tuesday] and we’re gaining momentum every day.”

There have certainly been some high points in this process, like when Leiweke entered the equation and pledged his support, when UAA president Pat Pitney and the board of regents agreed to extend the fundraising deadline, and when Sean Parnell—who happened to already be a contributor to the cause—was selected as the school’s new chancellor.

But there also have been lows. The team’s last season in the WCHA getting canceled and head coach Matt Curley resigning after seven months as a figurehead for the movement were certainly tough moments to stomach.

Bethard’s hope never waned, though, and her group never lost sight of its goal. “I hate losing so I guess it just increased our determination to show the world we could save this program.”

In it for the long haul

Reaching this goal of covering two years of operating expenses is lofty, but what happens if they reach the goal? What’s to stop the university from cutting its hockey program again after those two seasons are done?

Save Seawolf Hockey has thought of this as well and currently has a memorandum of understanding signed by the school’s athletic department. That MOU indicates that if the boosters reach this goal and continue to help in fundraising efforts for a percentage of the expenses long-term, the school will back the program moving forward.

They also now have an important voice supporting them.

“The new chancellor that we have is absolutely awesome. He’s behind the memorandum of understanding one hundred percent,” Bethard says of Parnell. “He’s stepping up to the plate. He’s actually helping us in some of our fundraising calls, he’s meeting with us on a regular basis. It gives me just a tremendous amount of pride, I think, the fact that we’ve won over not only the athletic department but also the university as a whole.”

Bethard is also hopeful that the Seawolves can find a new conference to play in after they were effectively shunned from the WCHA.

“My big dream and what I’d really love to see is a true Western Collegiate Hockey Association that’s west coast. How many pro teams do we have? California, Washington, Nevada…” She believes there’s a market for it in those places. “Collegiate hockey has its own draw… [They play] because they love it, you know, and they’re out there leaving their heart on the ice every night.”

It’s funny how sometimes all a movement needs to get its footing is somebody to step up and lead. It doesn’t necessarily matter that person’s background, it just takes passion, commitment, a cause that people believe in, and unbendable perseverance to reach the end goal.