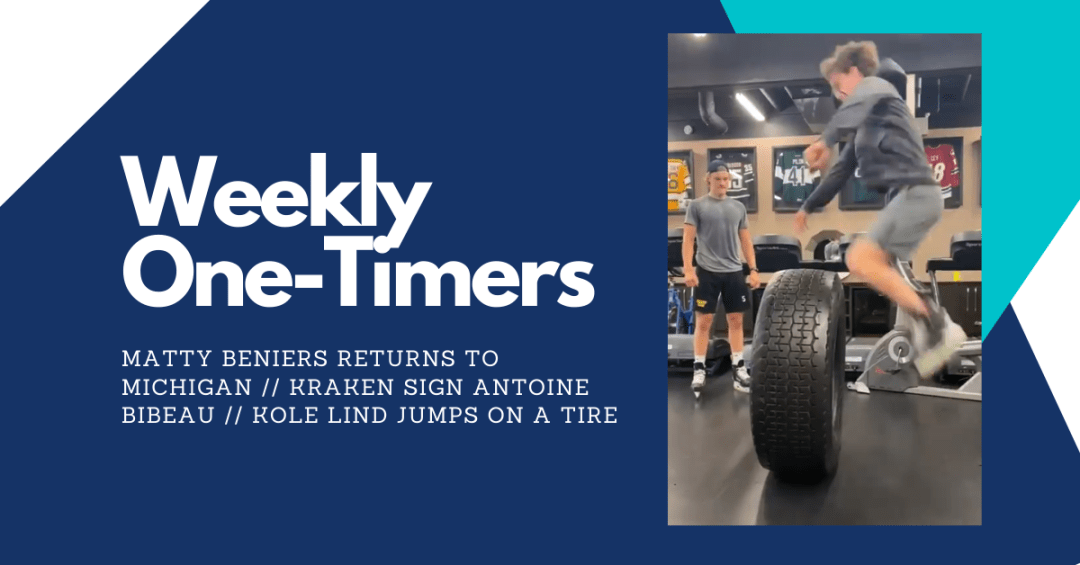 As far as the Seattle Kraken are concerned, it was a mostly quiet week from the organization. However, there was a rather large—albeit expected—Kraken-related bombshell dropped by the University of Michigan. In a strangely timed Friday evening news dump, the school confirmed that Seattle’s No. 2 overall selection in this year’s NHL Entry Draft, Matty Beniers, will return to the school for his sophomore season.

We dig into that Beniers news and plenty more in this week’s edition of Weekly One-Timers.

Beniers joins No. 1 pick Owen Power (Buffalo) and No. 5 pick Kent Johnson (Columbus) back in Ann Arbor for the trio’s second season together.

And lest you forget, No. 4 overall pick Luke Hughes (New Jersey) is an incoming freshman for the Wolverines this year, and they still have guys like John Beecher (No. 30 overall in 2019), Thomas Bordeleau (No. 38 overall in 2020), and Brendan Brisson (No. 29 overall in 2020). So, rightfully, every pundit in the hockey world will surely be choosing Michigan as the odds-on favorite to win the national championship.

This is the whole point for Beniers deciding not to immediately join Seattle. The Wolverines had the misfortune of a COVID outbreak prematurely ending last season on the eve of the NCAA Tournament for a group that was already among the favorites to reach the Frozen Four. Now bring back all that great talent and add in Hughes, and this has the makings of one of the best college hockey teams of all time.

Plus, after one year of college hockey with no fans in the stands, a drastically altered schedule, and heavy restrictions throughout, we’ve heard the future Kraken center talk about how he hasn’t gotten the true college experience yet.

Is it disappointing that we won’t see Beniers in training camp and fighting to be a part of the Kraken roster all season long? Of course. Is it surprising that this was his decision? Certainly not.

Our guess here at Sound Of Hockey is that Beniers and his highly drafted brethren will all jump ship as soon as Michigan’s season ends, meaning you should still get a chance to see the touted prospect at Climate Pledge Arena at least a few times in the spring.

Another bit of Kraken news this week was the signing of netminder Antoine Bibeau to a one-year, two-way contract worth $750K at the NHL level. Bibeau is certainly bound for the minor leagues, barring injuries to Philipp Grubauer or Chris Driedger. He does have four games of NHL experience for the Maple Leafs and Avalanche and is 2-1-0 in his career. At the AHL level, he has a career record of 100-64-28 with a 2.74 goals against average and .907 save percentage.

Of course, the Kraken also have Joey Daccord in the fold, and they will share their AHL affiliate Charlotte Checkers with the Florida Panthers—who will have goalie prospects of their own needing time—so it will be interesting to see how Bibeau actually slots in as the season plays out.

Kole Lind jumps on a tire for some reason

Kole Lind, the 22-year-old forward prospect selected by the Kraken in the Expansion Draft from Vancouver, posted a video of himself wearing skates and jumping onto a tire this week.

We at SOH have a lot of questions for Lind. They are:

Call me cynical, but I feel like it’s possible to get the same results by jumping onto something that won’t roll away if Lind were to land a centimeter off in any direction, potentially causing serious injury. Nonetheless, this is a pretty good party trick.

Our 15-year swoonfest has ended. Perhaps the dreamiest goalie to ever don the pads has announced that he has officially hung them up for good.

Breathtaking good looks aside, Lundqvist truly was a remarkable talent in net. I recall seeing him in person for the first time in a game against the Detroit Red Wings at Madison Square Garden during the 2009-10 season.

I remember being surprised by how deep he played in the crease, practically never leaving his goal line. He got away with it because he had this wide stance that nearly spanned the entire bottom of the net from post to post, and his ability to react to shots was as good as any netminder I’ve ever seen. Growing up, I was taught to always play at the top of the crease to take away angles from shooters, so it was fascinating to see a netminder have such profound success with that style.

That night, the Rangers won, and the fans chanted, “Hen-reek! Hen-reek!” about a half-dozen times as the King stood on his head throughout.

It’s also interesting to note that although Lundqvist signed a one-year deal with the Washington Capitals last season, his scary cardiac diagnosis and ensuing open-heart surgery meant that he actually did end up playing his entire career with the Blueshirts.

In all, Lundqvist posted a career record of 459-310-96 with a 2.43 goals against average and .918 save percentage. He led the Rangers to the Stanley Cup Final in 2014 and backstopped Team Sweden to Olympic gold in Turin in 2006. He is a shoo-in first-ballot Hall of Famer, and the Rangers have already confirmed that his No. 30 will be hoisted to the MSG rafters this season.

By the way, 30 is a pretty common goalie number, so in a way, it was a bit selfish of Lundqvist to choose it way back when he began his NHL career. He clearly knew that he would become one of the best netminders ever and his jersey would eventually be retired, taking a coveted numerical option away from many future Ranger backstops.

But I digress. Congratulations Henrik on an incredible career. I’m sure you are reading this.

Speaking of jerseys being hoisted to the rafters, the St. Louis Blues announced that they will retire No. 44 this season.

We at SOH were surprised to see it wasn’t the Arizona Coyotes who would be retiring Chris Pronger’s number.

Speaking of the Coyotes, the City of Glendale announced this week that they are no longer seeking an extension of their lease agreement with the club beyond the 2021-22 season.

Some have said it’s a negotiating tactic, but others have said it’s truly the end of the road for the team at Gila River Arena, and the Coyotes will need to find a new home after this season. Katie Strang had a great rundown of the situation in The Athletic. She also had reported on the toxic situation playing out between the Coyotes and their vendors back in February, and that certainly is a factor here.

Where does this organization go next? Gary Bettman has stated he expects the team to remain in the Phoenix area, but you can bet there are other markets out there—namely Quebec City, Houston, and Kansas City—that are salivating over the developing situation in the desert.

Team USA off to good start at Women’s Worlds

The IIHF Women’s World Championship got underway this week in Calgary, and Team USA dominated Switzerland en route to a 3-0 victory on Friday. The Americans got goals from Brianna Decker, Kendall Coyne Schofield, and Grace Zumwinkle.

Team USA goes back to work Sunday evening against rival Finland at 6:30 p.m. Pacific. All games can be viewed on NHL Network.