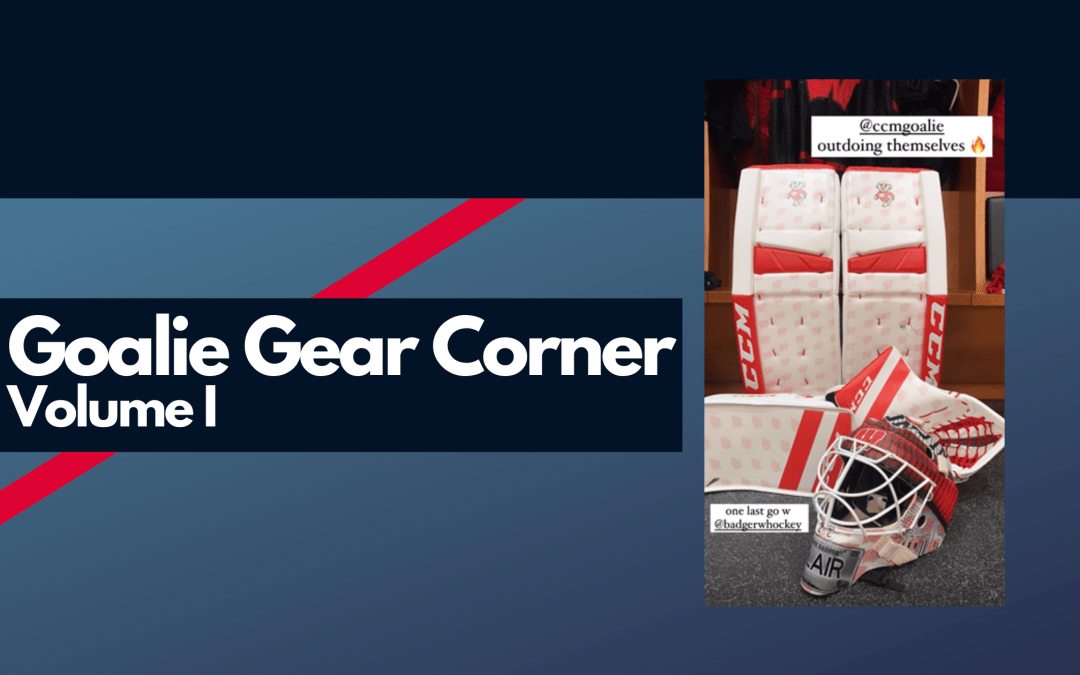 If you listen to the Sound Of Hockey Podcast, you are well aware that we do several regular segments on that show. One of those regular segments is a bit polarizing, being that the other two hosts—John Barr and Andy Eide—pretend to hate the segment (even though they actually love it and actively participate in it), while yours truly continues to plug it into the weekly agenda whenever I possibly can. It’s my firm belief that this segment… is… everyone’s… favorite segment. I’m talking of course about… GOALIE GEAR CORNER!

We have a couple housekeeping items to cover before we dig into this riveting written version of everyone’s favorite segment. First, we’ve long had listeners reaching out to us seeking more goalie gear content on SoundOfHockey.com, and for this we are thankful.

We’ve heard your feedback and this is our first real attempt to get such content onto the site. We will do more of these articles in the future, but we don’t have much of a cadence in mind for when we will produce them or anything like that. We’re thinking they will come as the goalie gear world warrants them, so just keep your eyes peeled for more GGC’s in the coming weeks and months.

Second, we have to give a shoutout to the GOAT of goalie gear content, Goalie Gear Nerd. They are a great follow on Twitter, and they really keep us up to date on the latest and greatest in goalie gear—with more of a focus on it than we can give—so throw them a follow. You will see several of their tweets embedded in this post.

Now, without further ado, let’s get to it. Here is our first installment of SoundOfHockey.com’s Goalie Gear Corner, in which we will gather ’round and gaze in awe at the dazzling beauty that is goalie gear.

This edition begins with a spectacular CCM setup from the netminder for my own alma matter’s women’s team. Kennedy Blair of the University of Wisconsin has revealed via her Instagram a look that we have not seen before from a Badger goalie.

Softly colored motion W’s are patterned down the faces of the pads, along with the blocker and the trapper. Red and white stripes at the top of the catcher and bottom of the blocker mirror the coloring on the knee rolls, tying everything together in a chef’s kiss fashion.

The softer and slightly transparent color of the W’s—rather than Wisconsin’s more typically bold cardinal red color—make this setup easy on the eyes. It comes through a bit pinkish, but I think if Blair had elected for a more opaque color, these would have been way too busy, so that’s a great decision.

No set of stunning Wisconsin pads is complete without Bucky Badger, of course, so that striped little beast adorns the tops of the pads.

Blair’s mask features a Wisconsin toque. I do like this mask, but it’s been done on many occasions in the past, so considering how well she did with the rest of the setup, I was a little surprised to see her recycle something that’s been done by many backstops in the past. To her credit, the carry over of motion W’s from the pads is a nice touch.

Next, we focus on a mask-only revelation from Adin Hill who many of us thought would end up with the Seattle Kraken before he was traded to San Jose. It’s not really fair to compare just a mask with Blair’s full setup above, but we will be looking more at the details when we consider individual equipment items, so hopefully that levels the playing field at least a little.

This is a real stunner. Painted by Alberta-based tattoo and mask artist Dave Fried, Hill has managed to take his new team’s mascot and actually use it in a way that is truly unique. He could have mailed it in and just slapped a few logos on there, but he found a way to make this very team-centric bucket a bit more personal.

Though we’re giving credit to Fried and Hill, apparently it was actually Hill’s brother and dad who did the design, which features a school of very fierce-looking sharks patrolling the area around a shipwreck.

One thing I love about the design is the bold teal color that makes up the bulk of the mask, with different shades being used on top to create the illusion of sunrays dancing through the ocean depths. The artist also did a masterful job of keeping the mask balanced while avoiding any symmetry on the two sides. Finally, with the shadowy shark figures cruising around in the background, and some bits of the paint job spilling over onto the white frame around Hill’s face, the scene looks truly three dimensional.

While the front and top of the mask are outstanding, it may be the backplate that makes this one truly special. A shipwrecky-looking goalie stick and ghoulish mask lie at the bottom of the sea. On the stick, Hill’s late goalie coach from junior, Michael Maniago, is memorialized with the insignia, “MM30.” And let’s not forget the octopus tentacles, clearly a shot at the Kraken, hanging from the jaws of the lone fully detailed shark on the backplate.

The Buffalo Sabres may have some issues in their goalcrease this season, as their two current netminders are Aaron Dell—who bounced to three different teams last season and played just seven games, turning in a 4.14 goals against average and .857 save percentage—and 40-year-old Craig Anderson.

Fortunately for the Sabres, stats and age don’t matter in this space, especially when you have one of the best gear wearers of all time playing between the pipes. Yes, I said it. Dell is reaching legendary status for his gear, a veritable Trevor Kidd for the modern era.

After crushing it with his Sharks, Maple Leafs, and Devils gear last season, Dell outdid himself with his latest setup from Brian’s (who doesn’t love a good Brian’s setup?).

First off, can we talk about the Buffalo head that is formed when Dell brings the pads together? As John Barr pointed out on our last SOH Podcast episode, that could truly make an alternate logo for the team, so you’re welcome, Sabres marketing department. And the swords framing the Buffalo? Those are beautiful enough before you realize that they will align with the handles of said sabers, which are neatly displayed on Dell’s glove and blocker, when the full setup is worn.

There’s just nobody on Dell’s level right now in terms of gear, and the good folks at Brian’s continue to help him put together near-perfect custom setups.

If you like bold gear designs, you will love this setup from Cassie Reale, a junior at Princeton.

There’s a lot to unpack here. Reale worked with Brian’s to come up with something that I’ve never seen before. While Dell’s Buffalo face is formed when he is standing and his pads are together, the face of the Princeton Tiger becomes whole when Reale drops into the butterfly. Adding to the beauty of the pads is the subtle Princeton crests on the outer rolls.

With such a bold choice of pad design, I thought Reale could have dialed it back a bit and gone with a less-is-more approach on the gloves. Instead, she went bold on bold on bold, with tiger stripes covering both the catcher and blocker and a big black “PRINCETON” running down the waffleboard. (Shoutout to Doc Emrick for his love of saying “waffleboarded away.”)

Nonetheless, HUGE credit to Reale for doing something truly unique. She took a theme and ran with it, and for that, we can’t really knock the bold choices.