Kraken Community Iceplex opens with an eye towards growing hockey 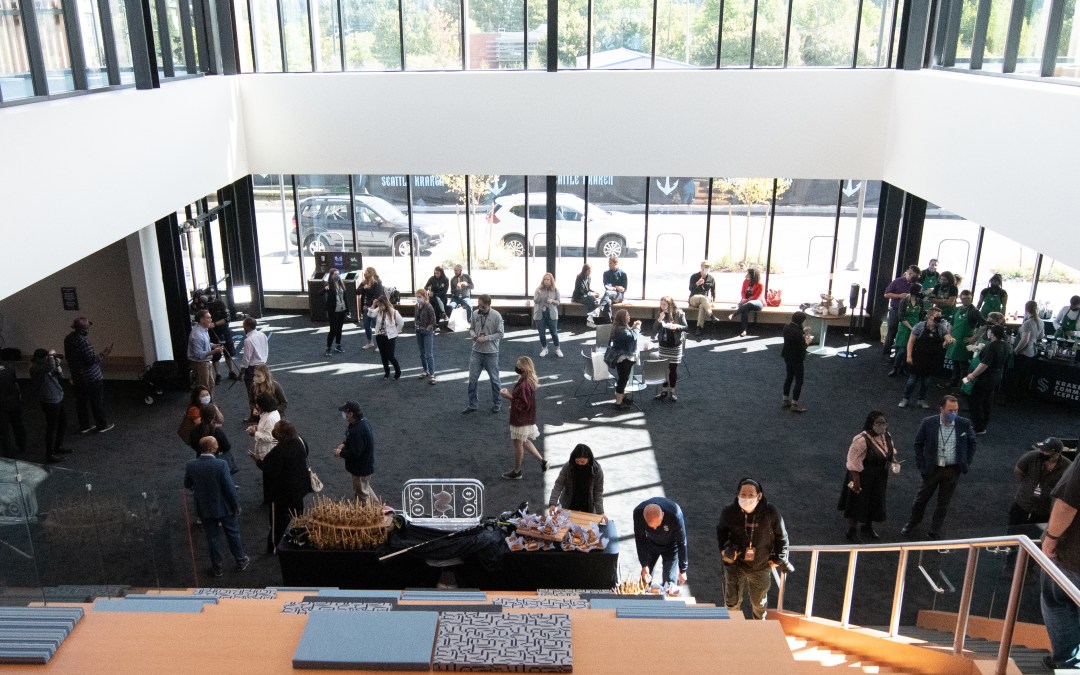 SEATTLE – The Kraken Community Iceplex at Northgate officially opens on Friday, but Thursday morning the team held a grand opening event for local partners, elected officials, and the media. Ground was broken on the facility in February of 2020. It is 180,000 square feet and features three publicly accessible rinks to skate on.

Thursday was a morning of Starbucks coffee, speeches, and just a little peek of Kraken hockey as about 15 players hit the ice for a workout known commonly as a ‘captains’ skate.’ For the first time we were able to see actual Kraken players skating on actual Kraken ice.

The complex is impressive and includes a Starbucks Community Store, a Kraken team shop, a Virginia Mason Medical Pavilion, and soon the 32 Bar and Grill – slated to open in the fall of 2021.

While seeing the Kraken skating was fun, and a bit surreal after the lengthy process to get us to this point in the process, the overarching theme of the morning and of the Iceplex is the impact it will have on the region. Specifically that impact is focused on youth hockey, adult hockey, and growing the game in the Seattle community.

That work has already begun, and the Kraken are currently registering youth for various levels of hockey. The team has already conducted remote ‘learn to play’ events throughout the state and will hold more at the Iceplex. But they also offer, and registration is open, for the Jr. Squid program which is an in-house hockey development program for youth ages 6-9.

Older and more experienced players can register for the Junior Kraken. The Junior Kraken will ice teams in U8 through U12 age groups. There will be evaluation skates in September to properly place players, and parents can sign their kids up now.

“We think about our offices being here, the team being here, practices, training camp, and obviously a great opportunity to engage with our fans, but 50 percent of the building, if not more, is really dedicated to that (local youth hockey) community,” Boyd said. “So, bringing in kids for learn to skate, learn to play, bringing youth hockey associations from around the state in for regional tournaments, it’s going to be an amazing facility. I think this is a great beacon for what we want to do in the hockey community here.”

The Iceplex won’t limit its ice to youth hockey, however.

Formerly known as the Greater Seattle Hockey League, the newly minted Kraken Hockey League will give the city’s robust adult rec hockey players a chance to play as well. The three rinks at the Kraken Community Iceplex will be the only three that are available in the city limits which will open up ice times for the adult hockey population.

“If you’re interested as an adult, now’s the time to sign up for the Kraken Hockey League,” Boyd said. “They’re gonna still continue to play out at some of the other rinks too, but it’s gonna be a real opportunity for those adults who also want to come and give it a try, and to feel like they can be out there one day and participate on the main rink and learn the skills that those NHL guys have.”

While hockey is the main focus, the Iceplex will have figure skating programming to offer, and yes, curling programs as well.