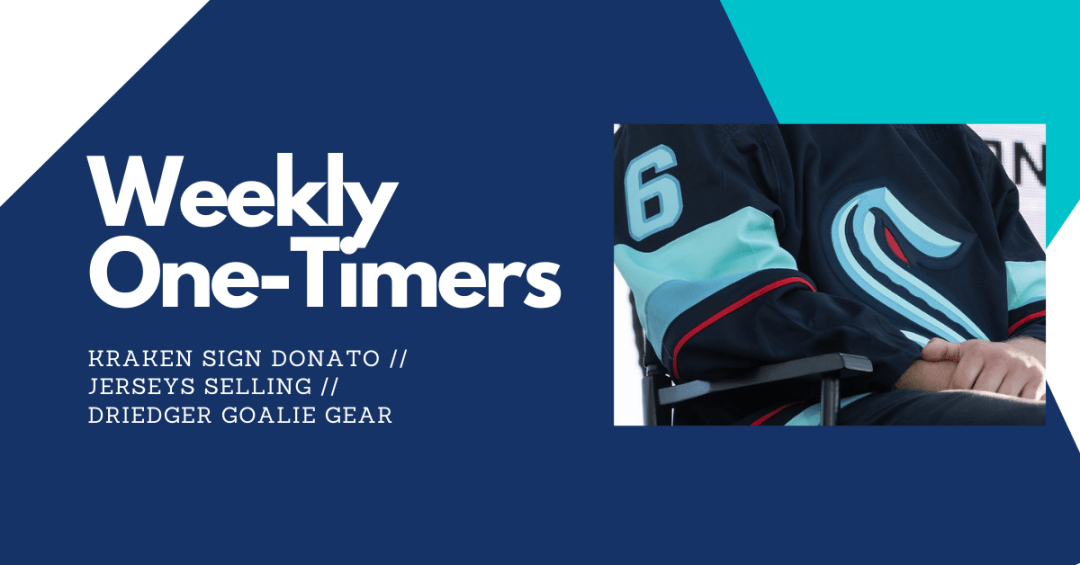 Look, we’re pretty sure we’ve mentioned this about a thousand times in the past as we have inched closer and closer to training camp, but we really mean it this time… KRAKEN HOCKEY IS ON THE HORIZON!

The team officially opens camp in less than a week—Thursday, Sept. 23, to be precise—and will play its first preseason game next Sunday in Spokane. Literal, actual, honest-to-goodness Seattle Kraken hockey is just over a week away [insert “Dr. Phil Having Panic Attack” gif or “Overweight Cat Breathing Heavily” gif here]!

The Kraken have seemingly done their darndest to add as many middle-six or bottom-six forwards on one-year deals as humanly possible this offseason. This week, the club added Ryan Donato to that group with a one-way contract worth $750K. It’s an interesting addition to an already crowded corps of depth forwards, so how he slots in remains to be seen.

The fact that he would have to be paid his NHL salary even in the AHL indicates that the Kraken do intend on keeping Donato in the Emerald City when the season gets underway. And while Donato has proven that he is an NHL player, he has yet to show as a constant producer offensively, which has in turn caused his minutes to decrease as past seasons have worn on. On a $750K deal, Donato could end up being a steal if he can get some decent minutes with good linemates.

Said general manager Ron Francis of the former Harvard Crimson standout and Team USA Olympian, “Ryan’s hockey sense and ability to contribute on the scoresheet are two ingredients we are excited to add to our forward group. We like his offensive potential and believe he can add scoring depth.”

Apparently Seattle fans really were excited to get their hands on the team’s new jerseys. Home and road sweaters officially went on sale this week, and at the newly opened Kraken Community Iceplex, the third rink was temporarily turned into a jersey-focused megastore. Lines at times stretched out the door and down block, as Seattle faithful clamored for their first beloved sweater with the mean and mysterious ‘S’ on the chest.

The jerseys being sold at the megastore and at the Kraken Team Stores in Chandler’s Cove and Bellevue Square Mall feature an “Inaugural Season” patch on the right shoulder. If you’re like me and want the jersey to maintain a bit more of an evergreen look beyond this season by not having that patch, you can apparently buy them sans the patch here. That’s just a little pro tip for you.

As an aside, speaking of the Kraken Community Iceplex, I had the good fortune of playing hockey at the facility this week, and it truly is unlike any other arena in the greater Seattle area. It is a fantastic place to play.

Training camp tickets now available to members of The Depths

The heading of this section pretty much says it all, but if you’re a member of “The Depths,” you now have access to purchase tickets to training camp. Orders are limited to two tickets per member and can definitely sell out (the KCI isn’t that big), so get ’em while they’re hot!

We will have a lot more Kraken goalie gear content in the coming weeks, but for now, we wanted to make sure you at least saw Chris Driedger’s new setup from Vaughn, which is truly a work of art. Behold.

Driedger hasn’t revealed his mask just yet, but a little birdie tells us it will feature a certain villain who lives at the bottom of the sea and prefers that debts owed to him are settled with souls.

Seattle’s top prospect and No. 2 overall pick in the 2021 NHL Entry Draft, Matty Beniers, was named an alternate captain for the University of Michigan for the upcoming season.

He joins a five-man leadership group for the Wolverines, made up of Beniers, Nick Blankenburg, Jimmy Lambert, Nolan Moyle, and Mike Pastujov. Those other four players are all entering their respective senior seasons, while Beniers is only a sophomore, a huge credit to the leadership skills that he possesses.

Beniers will be a key cog in the machine that will be the Michigan Wolverines, as he, Owen Power, Luke Hughes, Kent Johnson, and Brendan Brisson set out on their odyssey for an NCAA championship. Shoutout to @Bouldergrad41 on Twitter for referring to that group as “The Frozen Fab Five,” which is a pretty solid moniker for a Michigan team.

The NHL’s new national broadcast partners, ESPN and TNT/TBS, announced their schedules for the season. The Kraken are among the league leaders with 13 nationally televised games.

Seattle will be featured as part of a season-opening ESPN double-header on Oct. 12, when the Kraken play at Vegas for their first game ever. The home opener against Vancouver will also be carried nationally on ESPN+ and Hulu on Oct. 23.

The NHL is currently holding its two-day National Media Tour in Chicago, which is being attended by Kraken netminder Philipp Grubauer and forward Jordan Eberle.

And while those brief clips of Grubauer and Eberle taking photos are neat, have you seen Thatcher Demko catching a drone?

How about Roman Josi showing off his incredible artistic abilities?

As a goalie, I always like to point out that five players have to make a mistake before the puck gets to me. But sometimes, just one player makes a really obvious mistake, and it’s a big enough mistake to cover for the other four.

This is a tough moment for Mikhail Mamkin of Spartak Moscow in the KHL, who not only whiffs on the outlet pass, but then follows it up by stepping on the puck, falling down, and sliding it right onto the tape of a wide-open Andrei Kuzmenko. Kuzmenko then finds Anton Burdasov for an easy tap-in.

Remember those Southwest Airlines commercials that ended in “Wanna get away?” This blooper could be one of those commercials. The spot would need nothing else, just this clip with the narrator asking that question at the end.