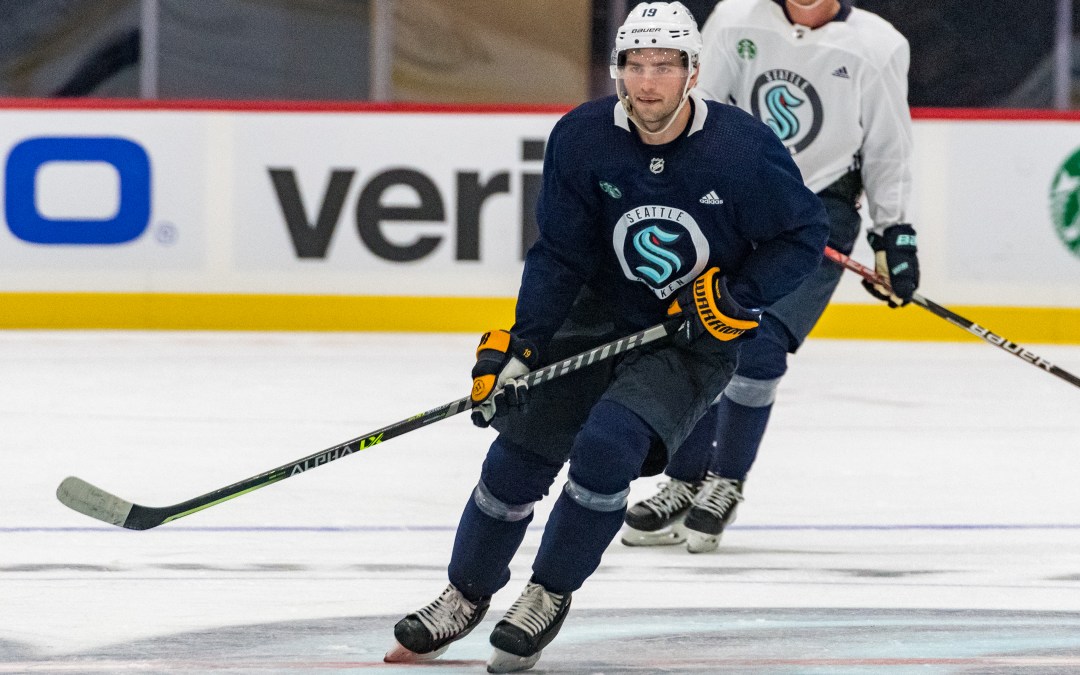 SEATTLE – For the first time ever, the Seattle Kraken skated on the ice together as the team opened its inaugural training camp Thursday.

It was just day one, but the event brought out a throng of eager fans dressed in all the latest Kraken gear and jerseys. The media was in force with cameras and recorders three or four rows deep during post-session scrums.

Day one is not about icing a finely tuned group of players. It’s about building. “You can’t do everything all in one day,” Kraken head coach Dave Hakstol said.

That’s true, you cannot, but Hakstol started to build during this first day. The team was split into two groups, white and blue – although both groups had players wearing dark blue, sky blue, and white practice jerseys – for separate practice sessions that consisted of a lot of uptempo drills.

These weren’t drills for the sake of drills, however. They were the building blocks to what Hakstol wants to ultimately turn into his systems.

“Day one is (about) balance,” Hakstol said. “We have to take advantage every day and get as much detail as we can. We have to build systems from the ground up, but really on day one, as big a piece, or maybe every piece is just getting out and making sure that we’re at the right competitive level, playing with pace and pushing one another.”

Hakstol added that Thursday’s drills were to add to systems for both the defensive and offensive zones.

With a new team how long will it take for those systems to be built in?

It shouldn’t take long. While Hakstol certainly has a way he’d like to play in every situation on the ice, it won’t be completely foreign to the players. It will come quick.

“I think at the end of the day it’s about how we want to play,” defenseman Mark Giordano said. “The other stuff, we’ll learn quickly. Most forechecks and pace of play and all that stuff for me is similar, but there’s little tweaks in each team’s system so we’ll learn those quickly.”

Pace was not an issue Thursday. The practices were fast and intense.

Here are some of the highlights from day one of Kraken training camp:

Yanni Gourde skates while Colin Blackwell does not

Gourde, wearing a red no-contact jersey, was on the ice for the second session of the day. He is recovering from offseason shoulder surgery that looked like it would keep him out into December.

While he skipped some drills, he flew around the ice when he was allowed to. Clearly, there was no lower body injury here.

“I consider him to be ahead of schedule,” Kraken general manager Ron Francis said at the end of the day.

Getting Gourde back early would be a coup for the Kraken as he figures to be a fixture in the team’s top six and most likely would slide into the team’s number one center position.

Blackwell, whom the Kraken selected from the New York Rangers at the Expansion Draft, did not skate on Thursday due to what Hakstol said was a lower-body injury. Hakstol added that Blackwell is considered day-to-day.

Lines? Do we have lines?

Hakstol did keep certain lines together during practice, but it’s way too early to start writing out the lineup for Game 1 on Oct. 12 in Vegas. Sill, although Thursday’s lines may not mean much, who is playing where will start to show some significance soon.

“We’ve only got a certain amount of time so what we would like to do is put some combinations together.” Hakstol said. “See what that chemistry looks like in order to see that you have to give it two or three days to build together, possibly even leave it together through one exhibition game. Then we have the opportunity to look at a different combination. We just want to make sure that everything we’re doing has some sense of reason to it.”

The chemistry is getting there

There have been many questions about how the Kraken would come together. How would a bunch of random players who have not played together before be able to push in the same direction to make the Kraken move?

Turns out, it isn’t that hard.

“All the guys were here earlier than I’ve seen groups and other teams come in,” Jordan Eberle said. “We’re all here for two weeks in advance of camp so I think that was just everyone wanting to get here, get settled. Being new and getting a chance to meet the guys, joke around in the locker room and start some camaraderie within the group to me was good.”

While Thursday was the first official practice with coaches on the ice, the team had skated prior.

Daily, the Kraken Community Iceplex saw Kraken players skating. As more players trickled into town the informal skates – known as Captain’s Skates – gave the roster a chance to not only learn each other on the ice but bond off of it.

The skates helped set up a productive first day of camp.

“Those (skates) are great for timing,” goalie Chris Driedger said. “Everyone out there is at the NHL level. When you’re skating in the summer during your goalie oriented skates it’s more technique, footwork stuff. You don’t really get the timing of reading the releases and stuff like that. Those skates are huge and it’s just nice to get in a little bit early and kind of get settled in the city.”

Fashion or function for Brandon Tanev?

Skating in the afternoon group, Tanev either took extra care to tape his shinpads or was looking for some unique hockey fashion.

The Seattle Kraken will be back on the ice for day two of training camp Friday, starting at 9:30 am.