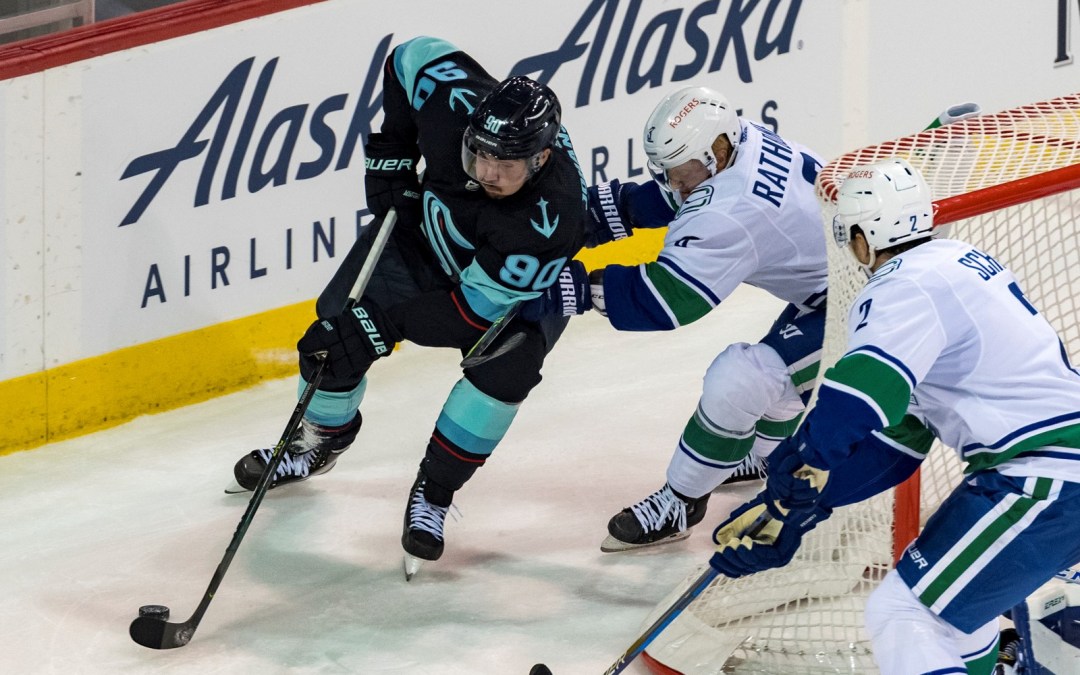 SPOKANE – The game didn’t count in the standings, and to drive that point home the NHL didn’t send a statistician to tally who scored the goals. But to the Seattle Kraken franchise, its players, and fans, the game meant everything. It meant that NHL hockey was here.

Over 10,000 fans packed into the Spokane Veterans Memorial Arena Sunday and cheered every move the Kraken made during a 5-3 preseason win over their would-be rivals, the Vancouver Canucks. Winning felt like icing on the cake.

Playing the game meant the Kraken had won no matter the final score.

“It was unbelievable to be honest,” Kraken forward Ryan Donato said. “I’m from the East Coast, so I’ve never been out here, and it just goes to show how exciting hockey is and how much it’s growing. Coming in here and seeing all the Kraken jerseys and how everything’s grown so fast, it’s truly awesome to be a part of it.”

Donato scored a power-play goal Sunday – Seattle would score three power-play goals despite little to no work on special teams during training camp – and his line with center Morgan Geekie and winger Joonas Donskoi continued to play well.

They were in the Canucks zone throughout the night and helped the Kraken earn nine of the game’s first 10 shots. As efficient as they were, they weren’t the only line to produce.

Jared McCann scored a goal and once again was put together with Jordan Eberle and Jaden Schwartz.

With two lines buzzing, might this mean that head coach Dave Hakstol has settled on his top six? Maybe but it’s worth staying tuned to see.

“We have the day off tomorrow, we’ll go back and re-evaluate that and look at the changes that we want to make and some of the new combinations that we want to look at,” Hakstol said. “There are things there that we liked. If we do go away from them to look at something different, we can always come back to that combination. But that’s something we have to really look at closely and we’ll discuss and talk about tonight and tomorrow through the day off.”

The Kraken showed off what could be possible in the coming season.

While the Canucks iced a younger roster, they still stole their way to a 2-0 lead in the first period. The scores came against the flow of play and were of the odd variety.

The first goal came just after a Seattle power play had expired when Jack Rathbone came out of the box to pick up a loose puck and beat goalie Philipp Grubauer. Shortly after, Vancouver’s Brock Boeser flung the puck into traffic, and it struck a Seattle defender and deflected in.

Just like that, Seattle’s early work had been erased.

Seattle came out in the second period and stuck to the game plan. Riley Sheahan would convert a crafty pass from behind the net by Nathan Bastian to cut into the Vancouver lead. He also solidified himself as the answer to a future niche and borderline minutiae trivia question.

McCann would get the game square when he somehow found an opening on the short side of Vancouver goalie Arturs Silovs’ position in the net.

“(You have to) just move the puck quicker,” McCann said. “I feel like we had to get them running around a little bit. They’re a hard forechecking team, they like to get on the puck a lot. Just make them skate and get tired and open up lanes for you.”

The Canucks would tie the game in the second period, but Geekie would score twice in the third to put the game away.

A moment in Seattle hockey history

It was a successful night for the Kraken on the ice and off.

Winning is nice, but the launch of the Kraken experience felt bigger. The wait was over and instead of debating about arena sites and parking, we can now talk about the Kraken forecheck that pinned Vancouver in its own zone for most of the night.

A full building four hours away from the Kraken’s home was impressive and proved this Kraken squad is in fact Washington’s team.

“To come here to Spokane and play in front of this kind of a crowd on night number one of the exhibition season was awesome,” Hakstol said. “You know, the Spokane Chiefs hosting us and taking care of both teams in this building was a great way to start the exhibition season.”

After a day off Monday the Kraken will next travel to Edmonton to play preseason game two against the Oilers on Tuesday.