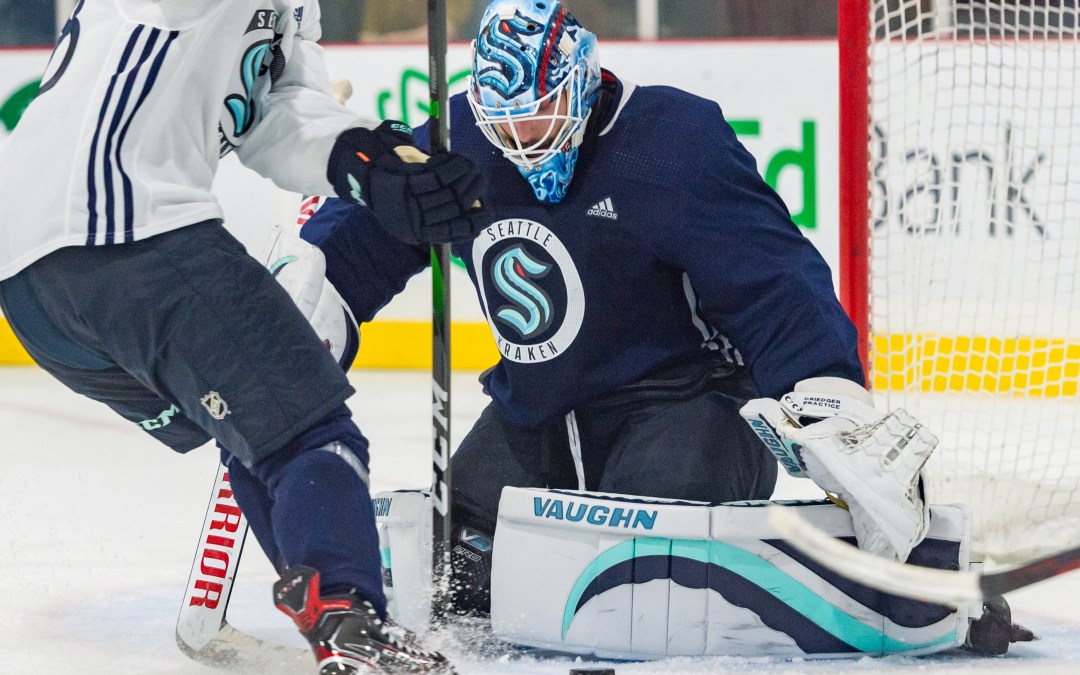 Perhaps that wasn’t the outcome that fans in attendance at accesso ShoWare Center in Kent, Wash., might have wanted, but there were a lot of positives that came out of Saturday’s 4-1 Kraken preseason loss to the Calgary Flames.

Playing its last “home” game of the exhibition season, Seattle really put forth a solid all-around effort, but couldn’t finish offensively and had some bad bounces that found the back of the net behind Chris Driedger. In all, the Kraken allowed just 13 shots on goal and really didn’t give up much from the slot area.

Now there’s just one meaningless game left on the schedule, but before we get there, here are our takeaways from Saturday night’s loss.

A lot has been made of the defensive depth that the Kraken are expected to possess on their inaugural roster. Although the team conceded four goals on Saturday, there were long stretches where nothing was getting through to Driedger, and when shots did make it on goal, they were typically from the outside. Two of the goals were deflected shots from the point, and two were of the “soft” variety, as Driedger indicated in his post-game presser.

“I thought we played an incredible game, kind of start to finish,” Driedger said. “They just kind of got a couple of nice bounces… I really like how we looked on the back end. We’ve got some big ‘D’ that can move the puck, and that’s kind of what you like to see as a goaltender.”

Driedger added that if the Kraken play like that more often than not, they will win a lot more than they lose. Pepper in a few Seattle goals each night, and that will absolutely be the case.

Takeaway #2: Who can score beyond the top line?

Seattle did get some chances to score. Kole Lind made a dazzling play early in the game to break a defender’s ankles at the blue line and rushed in uncontested against Dan Vladar. He put the puck right into the flaming ‘C’ on Vladar’s chest, though, as did Nathan Bastian on an open look in the second period. Meanwhile, Morgan Geekie had a few big blasts that he launched over the bar, and Alex Wennberg had a wide open net on a two-on-one, only to see the puck hop over his stick.

Moments like those leave you wanting and wondering who beyond the top line of Jaden Schwartz, Jared McCann, and Jordan Eberle can score for Seattle. If it does evolve into a team that only has one line capable of putting the puck in the net, it will become very easy to check and neutralize that group, and the naysayers who have been asking, “Who can score for Seattle?” will quickly become justified in their pooh-poohing.

In the two preseason games the Kraken have played without that top trio, the team as a whole has scored one goal combined.

Still, we have yet to see what happens when the full roster is in on a given night. Hakstol implied in a recent press conference that Tuesday’s game in Vancouver could be a dress rehearsal for the full roster, so perhaps this issue will be put to rest then.

Takeaway #3: Playing games in WHL rinks was the perfect way to launch this franchise

Of course it would have been nice to play these three preseason “home” games in the new Climate Pledge Arena. But in a way, doesn’t it make opening night that much more exciting? This way, there’s still plenty of intrigue and interest going into that first home game on Oct. 23 against the Vancouver Canucks, as fans will show up without having ever been in the nearly billion-dollar facility.

We certainly saw glimpses into what the Kraken have up their many sleeves (one assumes a Kraken would have to wear a shirt with eight sleeves) from a Game Operations standpoint, and it does appear that “Lithium” by Nirvana is the goal song.

But we definitely have not gotten the full presentation at this point, and we have not experienced all the bells and whistles that a brand new, state-of-the-art arena will bring.

To the credit of Spokane, Everett, and Kent, the fans showed up in a big way for all three preseason games. All three had regular-season atmospheres, and all three were great representations of the rabid hockey fanbase that exists in the Pacific Northwest.