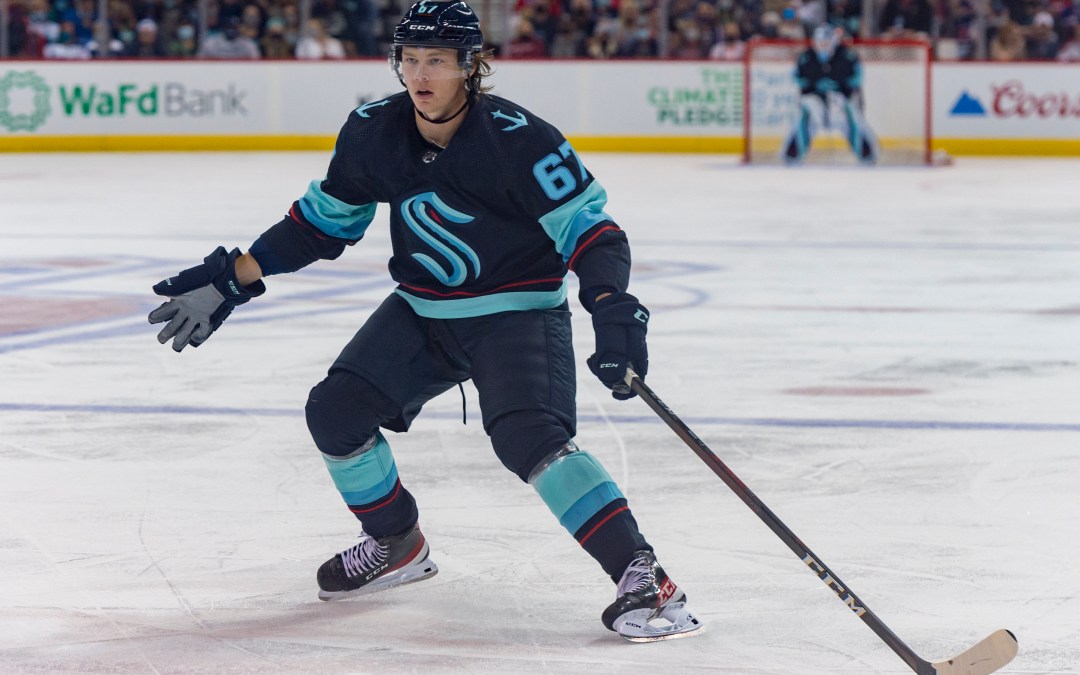 The first step is often the most difficult and the Seattle Kraken took a strong, yet clumsy, first step Tuesday night in Vegas against the Golden Knights. Seattle dropped the opener 4-3 thanks to slow first steps during the first and second periods.

After an early shift flurry right off the opening faceoff, the Kraken got sloppy defensively.

It led to goals by Max Pacioretty and Jonathan Marchessault just over a minute apart and before the season was seven minutes old the Kraken found themselves in a 2-0 hole. It could have been nerves or adrenaline, but the Kraken and goalie Philipp Grubauer looked out of sorts early in the period.

Seattle settled down after the two scores and carried the majority of possession the rest of the first period. Despite being down two, the Kraken led Vegas with shots on goal by 9-6 and by shot attempts at even strength by 19-12. Overall, the Kraken would hold a 51-43 shot attempt advantage on the night.

But the second period started much the same way the opening 20 started. Seattle took two penalties in the first three minutes and was on its heels. The Kraken killed off both penalties – ending the night 3-for-3 on the kill – but Pacioretty would score his second shortly after the second power-play to build an imposing 3-0 Golden Knights lead.

Twice in the preseason the Kraken came back to win games and it looked like they might do it again on Tuesday.

Ryan Donato would score for Seattle just after the midway point of the period to cement himself in franchise history with the first goal. More importantly, it gave the Kraken energy and life. Just over a minute later, Jared McCann would score after a slick passing play from the top line.

Heading into the third period, down one, the Kraken would tie the game on a Morgan Geekie snipe. The play looked rather benign as Geekie glided into the Vegas zone alone while his teammates changed behind him. Rather than dump the puck in and skate off the ice, he unloaded a deadly wrist shot that found the net over Robin Lehner’s shoulder.

Any momentum from that goal created was sullied 35 seconds later and it came with a bit of controversy. Off the rush, Vegas center Chandler Stephenson scored to put the Golden Knights ahead. Immediately, Seattle players looked to the officials and complained that the puck was kicked in.

It was reviewed and called a good goal as the replay judges ruled that while Stephenson turned his skate to have the puck deflect off it, he did not do it with a distinct kicking motion.

That would prove to be the game-winner and the Kraken fall to 0-1-0.

The good from the Kraken on opening night

There were things to like out of Seattle’s game Tuesday.

Erasing a 3-0 lead against a top team on the road is impressive. The Kraken aren’t built with dynamic scorers and falling behind by a trio of goals is tough to come back from. Seattle didn’t panic. They stuck with their systems and were able to walk the Golden Knights down. Early results indicate that this could end up being a resilient team.

The comeback was even more remarkable considering the club went through a COVID scare over the previous 24 hours. On Monday five players were put into the NHL’s COVID protocol and it was unclear if they would play. The players, including McCann, Jamie Oleskiak, Joonas Donskoi, and Marcus Johansson, were cleared with just enough time to get to Vegas and play.

After a shaky start, Grubauer found his legs and kept the Kraken within striking distance. Specifically, during the two early Vegas power plays in the second period. The Golden Knights had some of their best looks and Grubauer made six huge stops. He would end with 18 saves on 22 shots.

Seattle needs to find some secondary scoring and got it Tuesday. The top line with McCann, Jaden Schwartz, and Jordan Eberle did their thing to score but the Kraken also got goals from Donato and Geekie. It’s a great start for those two and the Kraken will need them as contributors.

Another potential source of secondary scoring played very well. Seattle’s second line centered by Alex Wennberg with Johansson and Donskoi logged 9:16 of ice time together at 5-on-5 and dominated. They were on the ice for 13 Kraken shot attempts and three from Vegas. Their expected goals (xGF) percentage was 89. They didn’t score but that kind of puck possession moving forward will lead to scoring.

What the Kraken need to clean up

Seattle struggled at times to manage the puck. Vegas’ second goal, scored by Marchessault was the result of a turnover by Vince Dunn deep in the Seattle end. The Golden Knights first goal was helped by a poor read on the forecheck by Nathan Bastian. Pacioretty’s second goal that made it 3-0 came after the Kraken threw it away in the neutral zone.

Giving the puck away not only leads to chances but results in Seattle chasing. When the Kraken chase, they can’t get into their forecheck which is a vital part to their attack.

Expect that to be a point of emphasis for Seattle head coach Dave Hakstol over the remainder of the opening road trip.

Donato will go down in history as the first goal scorer, but Vince Dunn will forever be known as the player with the first assist as he set up Donato’s goal.

Vegas had 10 takeaways to the Kraken’s five. Seattle led in giveaways 7-6.

Up next for the Kraken is a Thursday night tilt in Nashville against the Predators.