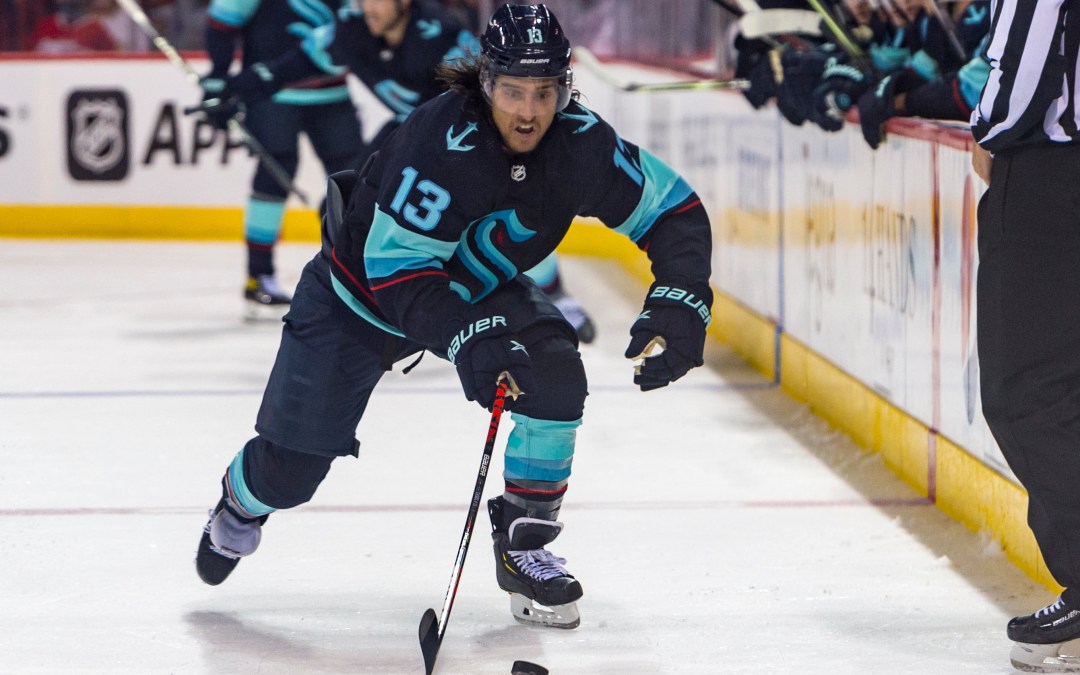 It’s cliché to say a team ‘hung on to win,’ but there’s no other way to describe the Seattle Kraken’s victory against the Nashville Predators. It would be the first win in Seattle’s franchise history.

Seattle was in control over the first two periods.

The Kraken owned the puck, building a 3-2 lead, and looked like they were going to sail their way to a win. Things took a turn in favor of the Predators over the final 20 minutes, however, as Nashville controlled everything and outshot the Kraken 13-1. Philipp Grubauer stood tall for Seattle and made great save after great save to turn away the tying bid. The goalie ended the night making 27 saves.

Brandon Tanev would score an empty net goal – for Seattle’s only shot in the period – to preserve a 4-3 victory as Seattle is in the ‘W’ column for the first time.

“I know the guys were really excited to be able to get the first win,” Seattle coach Dave Hakstol said. “When it sinks in it’s the first win in franchise history, it’s a big deal for everybody.

Grubauer simply was a monster in net and the difference during the third period. He stopped 10 of those scoring chances, only allowing a six-on-five goal to Mikael Granlund with 40 seconds left which added more drama to an already tense finish.

The Kraken weren’t generating offense but defensively collapsed in front of Grubauer and weathered the storm.

“Players on the bench managed it very well,” Hakstol said. “When you’ve got a captain like [Mark] Giordano, he’s calm as can be. We spent too much time in our own zone, we didn’t have the puck as much as we like. Sometimes the stress of the moment plays into things. There was no chaos on our bench. Guys were talking and doing the right things.”

Grubauer’s third period heroics allowed Seattle to get the puck down ice with 1:21 left in the game. Jared McCann raced it down in the corner and quickly sent it to Tanev in front for what ultimately would clinch the win.

It wasn’t easy but it was as memorable as a franchise’s first win can be.

“It’s huge, it’s something we’ll always remember,” McCann said. “We’ve got the [game] puck right now and we’ll do something nice with it.”

For the second straight game, the Kraken got scoring up and down the lineup. Yes, the McCann, Jaden Schwartz and Jordan Eberle line was good and McCann scored a power-play goal in the first period to tie the game at one.

But it would be Tanev who scored next when he crashed the net on another power play. He found a rebound in the slot and buried it for his first of the game and the season. The goal gave Seattle its first lead in franchise history.

In the second period, Nashville’s Roman Josi scored on a five-on-three power play to even the game up at 2-2. The Kraken would take the lead later in the period when newcomer Alex Barre-Boulet slid a perfect pass to Alex Wennberg who was all alone at the side of the Nashville net. Wennberg easily scored his first of the season to go along with an assist on the night.

Seattle will be a stronger offensive team if it can get scoring up and down the lineup, and for the second game, it got two or more goals from players not on the top line.

Welcome to the Kraken, Barre-Boulet

The Kraken picked up Barre-Boulet off of waivers Monday afternoon from the Tampa Bay Lightning.

At 24 years old, Barre-Boulet had appeared in 15 NHL games prior to Tuesday. He’s posted 34- and 27-goal campaigns in the AHL and has some skill. He arrived to the Kraken with barely enough time to learn some names and faces, but you wouldn’t have known by his play.

He was on a line with Wennberg and Joonas Donskoi, and they came up with the go-ahead goal.

“He made a key play in the game,” Hakstol said. “That was a hell of a play to find Wennberg on the back door. I thought he was rock solid.”

Seattle was a perfect 2-for-2 on the power-play Tuesday which is remarkable considering how little time they’ve had together as a group. So far, they’ve kept the formula simple. Get traffic and get pucks to the net.

Morgan Geekie led the Kraken with four shots on goal in just over 19 minutes of ice time. His line, with Tanev and Ryan Donato, didn’t produce goals, but despite the one-sided third period ended the night with 64 percent of five-on-five shot attempts while they were on the ice.

McCann added an assist Thursday and has scored in both games Seattle has played.

The Kraken continue their road trip with a matchup Saturday with the Columbus Blue Jackets.