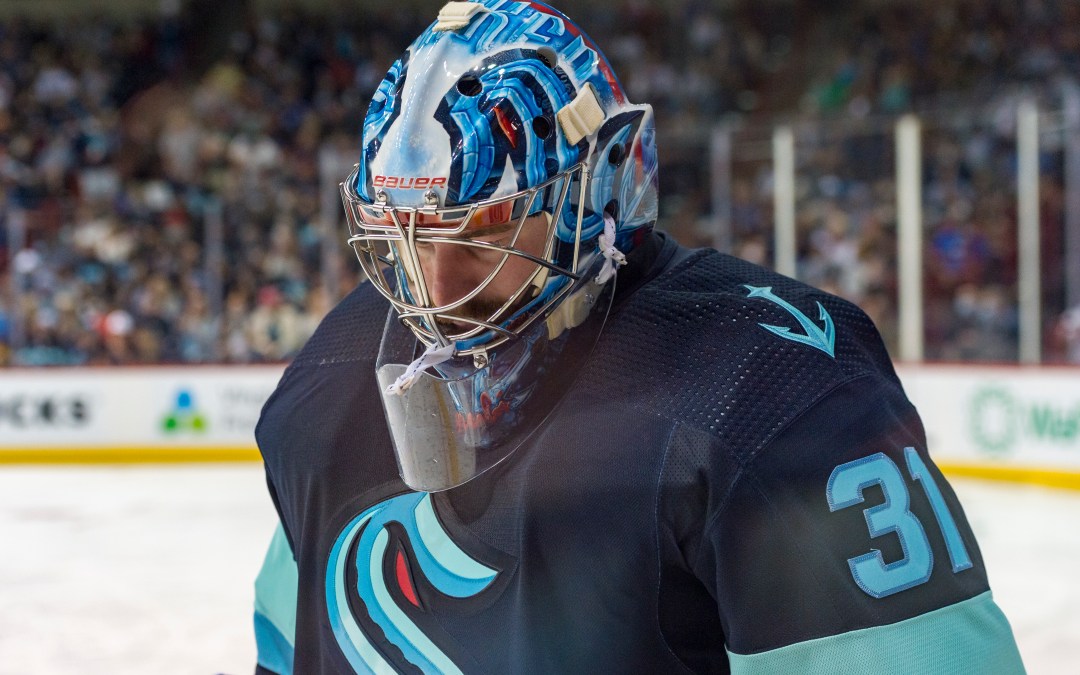 Thursday was a night to remember for Seattle Kraken fans, as their beloved new team got the first victory in franchise history against the Nashville Predators in their hostile barn. It was a tale of two games, as Seattle had the better of the play through two periods and absolutely deserved the 3-2 lead that it took to the dressing room prior to the third. But when the third started, a switch had flipped.

Gone was the aggressive Seattle forecheck and present was a team completely in its proverbial turtle shell, just doing everything it could to minimize the danger of the shots Nashville was getting, as the Predators pushed to level the score.

As the old adage goes, a win is a win, and this particular win is huge for many reasons. Here are our three takeaways from the first victory in the history of the Seattle Kraken.

We really didn’t know what Seattle was getting from Alex Barre-Boulet, claimed off waivers from the Tampa Bay Lightning on Monday. The smallish 24-year-old forward came to Seattle with just 15 games of NHL experience under his belt, but we couldn’t help wondering if the fewness of opportunities was simply a product of the unmatched depth of the Lightning organization.

After all, Barre-Boulet put up huge numbers in the AHL, notching 136 points in 144 games with the Syracuse Crunch over parts of three seasons. AHL success doesn’t always translate to NHL success, though, so we were reserving judgment.

What we saw from ABB on Thursday indicated that the Kraken may have stolen away a very talented young forward.  He was fast and aggressive, fitting nicely with Seattle’s systems in the offensive zone, and he quickly seemed to find chemistry with Alex Wennberg and Joonas Donskoi on the second line.

Barre-Boulet also showed off his creativity when he found Wennberg standing wide open on the backdoor for an easy tap-in at 9:54 of the second period.

He ended up with just 9:05 of ice time, but coach Dave Hakstol noted after the game that the team was defending in the third, and he realized that Barre-Boulet probably didn’t have a full grasp of Seattle’s defensive systems yet. So Nathan Bastian got a lot of the time with Donskoi and Wennberg in the final 20 minutes.

The relatively low usage was not a slight on the way Barre-Boulet played. In fact, Hakstol called his game “rock solid” and noted that he had a big impact on the outcome.

Takeaway #2: A change in style and a change in personnel

Through preseason and in these first couple games, the Kraken have quickly developed an identity as a team that is aggressive on the forecheck. They showed this Tuesday in Vegas, and they showed it through the first two periods Thursday in Nashville. That style makes for exciting hockey, but also leaves Seattle susceptible to quick strikes and counters, which the Golden Knights definitely took advantage of in the opening game.

We were curious, though, what would happen when Seattle went into the third period with a lead. Taking chances to create offense in the earlier stages of a game is one thing, but coaches generally don’t like firewagon hockey, especially when their team is ahead late.

What we saw from Seattle in the third period Thursday indicated that there is a different gameplan that will be executed when the Kraken are in position to win.

Lines were shuffled for a more defensive posture (we previously mentioned Bastian replacing Barre-Boulet), and Jamie Oleksiak and Adam Larsson got big minutes. The team collapsed around Philipp Grubauer to keep shots to the outside as much as possible and were hellbent on not overcommitting to take themselves out of position.

Despite the puck hardly leaving Seattle’s zone during the entire third period—and the Kraken not even registering a SINGLE SHOT before Brandon Tanev’s empty-net goal—there weren’t that many prime scoring chances for the Predators. Those shots that did get through were stopped by Grubauer, who looked especially dialed in late.

“At times there’s things we want to do better and a little differently in that period,” Hakstol said after the game. “But at the same time, one thing we didn’t do is we didn’t give up a whole lot. We spent too much time in our own zone. We didn’t have the puck as much as we would like, but sometimes the stress of the moment plays into things.

“There was none of that chaos on our bench. It was very calm, guys were talking, doing the right things, and at the end of the day, we kept things to the outside and got the job done.”

Takeaway #3: Fighting can still impact the outcome of a game

No, we are not referencing this Kraken fan and this Predators fan duking it out in the stands for what we believe to be the first fan fight in franchise history.

On the contrary, we are talking about the pugilism that happened on the ice when Vince Dunn threw a big hit on Colton Sissons deep in the Kraken zone with about five minutes left in the first period.

The hit was squeaky clean, but Yakov Trenin for some reason didn’t like it and challenged Dunn. Comically, Jeremy Lauzon tried to jump in and handle the business on Dunn’s behalf. But Dunn—who also showed in preseason that he can handle himself in these situations—didn’t hesitate. In a flash, his gloves were off and fists were flying. Trenin threw more punches, but headed straight to the dressing room for repairs after, as Dunn skated with gusto straight to the penalty box.

Adding a dash of salt to Trenin’s wounds, he got an extra two minutes for going after Dunn.

From the box, Dunn watched as Seattle took control of the game late in the period and scored the first two power-play goals of the season.

For his physical contribution, captain Mark Giordano named Dunn the player of the game in the dressing room after the win.

The debate about fighting will rage on as long as it exists in hockey, but Thursday night, it had a big role in turning the tides for the Kraken.