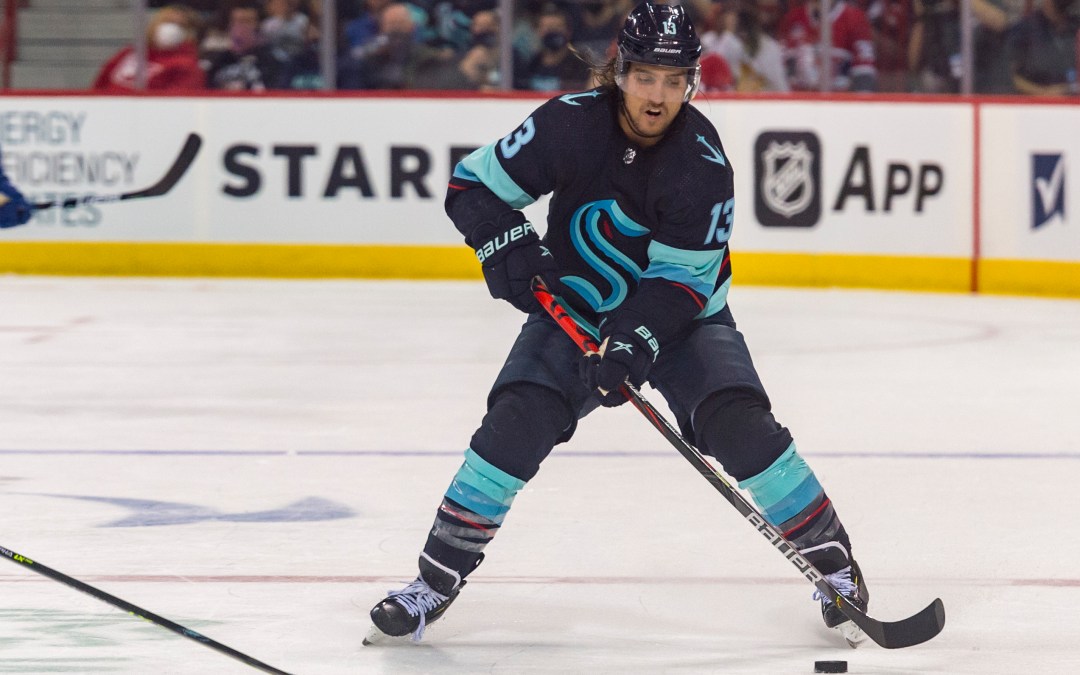 There was an unmistakable feeling of deja vu that hit during the third period of Saturday’s 2-1 overtime Kraken loss to the Columbus Blue Jackets. Just two nights earlier, the Kraken entered the third with a one-goal lead against the Nashville Predators and went fully into a defensive shell, getting just one shot in the final 20 minutes. On Saturday, Seattle again entered the final frame with a one-goal lead and again promptly parked the bus in its own zone, conceding shots and zone time in exchange for keeping as much as possible to the outside.

It again took nearly 10 minutes for the Kraken to register a shot of their own in the third period against the Blue Jackets, but soon after they did that, Columbus leveled the score. As quickly as it arrived, the deja vu vanished.

Here’s what we’ve taken away from the Kraken getting their first loser point in the standings.

Takeaway #1: The formula is coming into focus

Seeing how Saturday’s third period played out was really interesting. The Kraken clearly intend to be a team that protects its leads late in games, rather than continuing to push and keep the opposition on its heels. They morph from a team with a relentlessly aggressive forecheck to a team with no forecheck whatsoever.

That approach will mean a lot of nail-biting finishes for fans this season, as it will often look like the Kraken are in hold-onto-your-butts mode. Seattle will appear under duress throughout third periods when they are leading.

Saturday showed that the Kraken aren’t really “under duress” in these situations, though, and that it’s actually by design for the flow of the game to go this way. The defensive bunker only didn’t work this time because the Kraken stretched out the ice a little more than they did on Thursday and allowed some odd-man rushes as a result.

Coach Dave Hakstol confirmed after the game that the one thing he didn’t like about the third period was that the group gave up too much off the rush.

What was most interesting about Saturday’s game was what happened after Eric Robinson broke through on Philipp Grubauer and found the equalizer. The Blue Jackets rode a wave of momentum for a couple minutes, but after that, Seattle re-engaged offensively and commanded zone time for much of the final eight minutes or so.

That’s proof positive that the Kraken have the ability to push back and create offensively when they want to, but if they have the lead in the third, there’s no real desire to go score more goals.

Seattle surprised us when they signed Grubauer, the biggest name on the free agent goalie market this offseason, to a six-year, $35.4 million contract. The goalcrease had previously appeared to be settled with Vitek Vanecek and Chris Driedger sharing the load after those two were selected in the Expansion Draft and Driedger was signed to a three-year, $10.5 million deal.

But man, what a luxury it is to have Grubauer back there. The Kraken can rely on him to back them up when they’re playing more aggressively and trying to gain the lead. When they get that lead, they can sit back and confidently expect him to make saves, as long as they keep shots to the outside. And even when the defensive structure breaks down, he’s still going to bail out his mates more often than not.

In all, Grubauer made 23 of 25 saves on Saturday. It doesn’t sound like that many, but when you consider the amount of zone time that Columbus got in the third and the quality of a couple of the chances earlier, he was stellar.

Signing last year’s Vezina Trophy finalist away from the Colorado Avalanche was an absolute coup by Ron Francis and his staff.

Takeaway #3: Brandon Tanev is on pace for 82 goals

We’ve talked a lot about the Kraken trying to protect their one-goal lead Saturday, but we haven’t discussed how they got that lead. Turbo Tanev potted two against the Predators on Thursday—one on the power play and one with an empty net—and followed that up with an absolute banger on Saturday.

Forward Oliver Bjorkstrand was back defending for the Blue Jackets and got tangled up trying to make a play on a bouncing puck. He went down, and suddenly the speedy Tanev was in alone with Elvis Merzlikins with all the time in the world.

Tanev showed pass to Riley Sheahan, but then turned, deked Merzlikins out of his jock, and went backhand shelf to put Seattle in front at 14:32 of the second. It was a goal scorer’s goal by a guy who is not known as a goal scorer.

So is Brandon Tanev a goal scorer? Will he continue this torrid pace?

Well, this pace certainly not. There’s a reason he plays on the third- and fourth-lines. His game is to fly around the ice, create havoc, and wear out opposing defensemen with his physicality, not score silky smooth goals like we saw on Saturday.

There is a world, though, in which Tanev contributes consistently. The Kraken, which lack obvious starpower of the scoring variety, need to be a score-by-committee type of team. They need help from their depth players, and Turbo is showing that he can be one of those guys that chips in.

Interestingly, Tanev had two golden opportunities as well in the opening game at Vegas, including a breakaway that just got poked off his stick by Robin Lehner, so his goal total could be even higher than it is now.

As he keeps getting matched up against more offensively minded lines, Tanev will continue to create chances with his lightning-fast speed.

Will he keep converting on those chances?