UPDATED: Yanni Gourde and Joey Daccord in for Kraken versus Devils, Driedger out 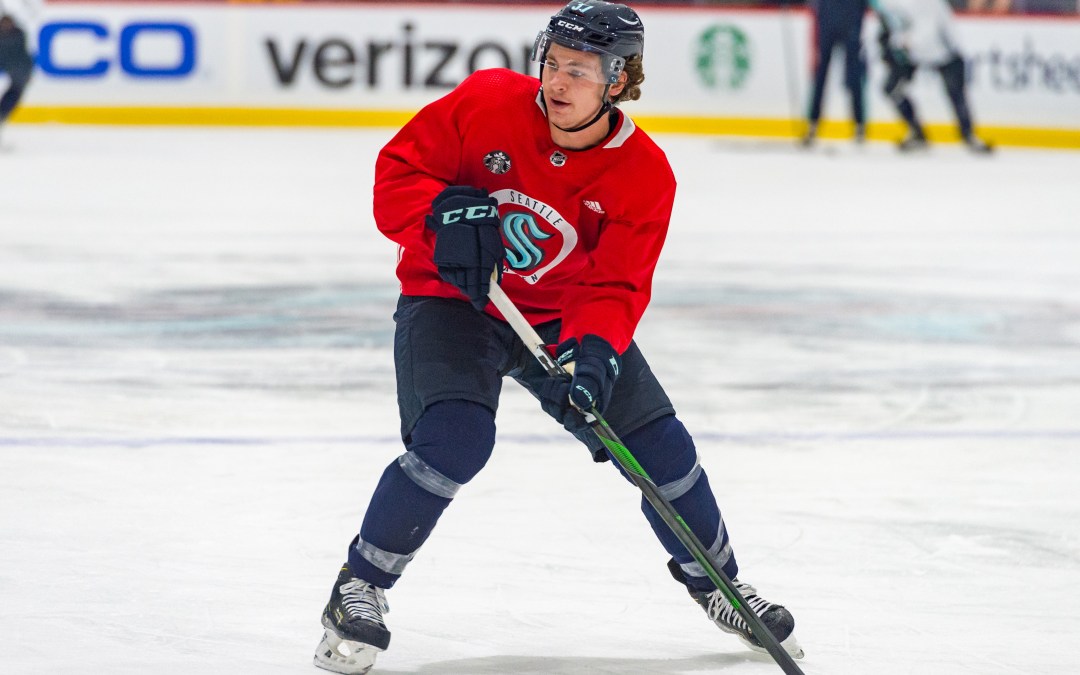 UPDATE: The Kraken dropped some late-breaking news Tuesday afternoon, just hours before Seattle was set to take the ice against the New Jersey Devils. Yanni Gourde, who had been recovering from shoulder surgery that was originally supposed to keep him sidelined for several months, has been activated from injured reserve and will make his debut for Seattle on Tuesday.

In the same tweet from Kraken PR, the team revealed that netminder Chris Driedger, who was expected to start Tuesday, had been placed on IR, while Joey Daccord had been recalled from AHL Charlotte. Daccord will now make the start.

To get yourself fired up for a Daccord start, you may want to watch this video, which we filmed with him during Kraken training camp.

Sometimes in hockey, the best thing you can do is forget about your last game and move onto the next one. Teams typically look at back-to-back games as a challenge to overcome, but occasionally it’s a benefit to be able to get right back on the horse after taking a hard fall. Seattle got crushed 6-1 in Philadelphia on Monday in a game where nothing went right. Thankfully for the Kraken, they have no time to dwell on the ugly loss and have an opportunity to salvage their brutal five-game season-opening road trip with a victory tonight against the New Jersey Devils.

One thing we thought we would see from Seattle coming into the season was a 1A/1B goalie platoon, where Philipp Grubauer got more starts than Chris Driedger, but Driedger would be used regularly. With that in mind, we were sure that Driedger would get his first start of the year on Monday after Grubauer had gone for each of the first three.

Instead, Grubauer again was in the crease to start the game, indicating that Driedger would finally go Tuesday in Newark. What’s interesting about this utilization is that it’s more indicative of a team with a traditional starter and backup than it is of a team that intends to rotate its battery throughout the season.

Playing Grubauer for the fourth game in a row backfired on Monday. That’s not to say that the goals were Grubauer’s fault—they really weren’t, save for perhaps the fifth one that squeaked through his pads—but having the team’s starter get shelled is not good for anybody.

And because there was another game against the Devils looming Tuesday, coach Dave Hakstol was clearly hoping that Grubauer could gut it out to save Driedger. By Hakstol’s own admission, he ended up leaving Grubauer in for the fifth goal, at which point he probably should have been out of a game that had already gone sideways.

Though there was no morning skate to confirm, we are fully expecting that Driedger will get his first start for the Kraken Tuesday. He stopped six of seven shots Monday in relief and got a little help from his goal posts. The 27-year-old had a breakout season in Florida last year, where he went 14-6-3 with a 2.07 goals against average and .927 save percentage in 23 games, commanding plenty of time despite sharing the net with Sergei Bobrovsky.

In addition to getting beaten up on the scoreboard Monday, Kraken players also took their lumps physically. Nathan Bastian—who returns to New Jersey to face his old team Tuesday—was fed a whole tray of knuckle sandwiches in a fight with Nate Thompson. Jamie Oleksiak landed several rights on Nick Seeler, but also went to the penalty box looking at his hand after hitting Seeler’s helmet with a few of those blows.

And Jaden Schwartz had this happen…

While those are all just bumps and bruises, Mason Appleton was involved in an awkward collision late in the game that was a bit more concerning. He was ridden into the boards by Flyers defenseman Keith Yandle in an innocuous-looking play, but Appleton went down in a heap. He then struggled to the bench, where he was doubled over in pain for a while. It was hard to tell what happened on the play, but it looked like he may have tweaked something. Again, no morning skate to confirm if he’ll be back in the lineup Tuesday, but keep an eye on his status when the Kraken take the ice against the Devils.

Many in the hockey world thought that the New Jersey Devils would take a big step last season. They did not, however, finishing 19-30-7 for seventh in the temporarily formed East Division. Can they do it this year? They’re young, but there’s again reason for Devils fans to hope for improvement.

Our choice for breakout player of the year is Jack Hughes, the No. 1 overall pick in the 2019 NHL Entry Draft. When he was selected, it was obvious that he had plenty of growing and maturing to do physically. Now that he’s 20 years old, he appears to be filling out a lot more and sounds confident and ready to lead this Devils team.

Hughes got off to a great start in New Jersey’s first game Friday against the Chicago Blackhawks, scoring two goals including the overtime game winner. He was so excited to have potted the winning goal, he threw his stick in the crowd in celebration, something we don’t believe we’ve seen before.

New Jersey also got a shiny new cornerstone player on the back end in Dougie Hamilton, who signed a seven-year $63 million deal over the summer. The offensive defenseman immediately made his presence known in New Jersey, scoring 17 seconds into that opening game against the Blackhawks.

Ryan Graves—acquired in a pre-Expansion Draft trade with Colorado—skates with Hamilton on an all-new top defensive pairing.

In net, the Devils have problems. Their starter, Mackenzie Blackwood, is one of just a handful of players in the NHL who has so far refused to get vaccinated against Covid-19. This is an issue anyway, but it will be especially painful for New Jersey when they travel to Canada, where—as of now—he will not be eligible to play.

All that is moot for tonight, though, as Blackwood is apparently getting over an injury. So, newly signed Jonathan Bernier gets the nod for the second time in as many games. Bernier, 33, has become a journeyman in the later stages of his career, having now spent time with six NHL organizations. He was 9-11-1 behind a terrible Detroit team last season, with a 2.99 GAA and .914 save percentage, in line with his career numbers.

Former Spokane Chiefs superstar and current Devils defenseman Ty Smith is on injured reserve, so we will not see him against the Kraken.