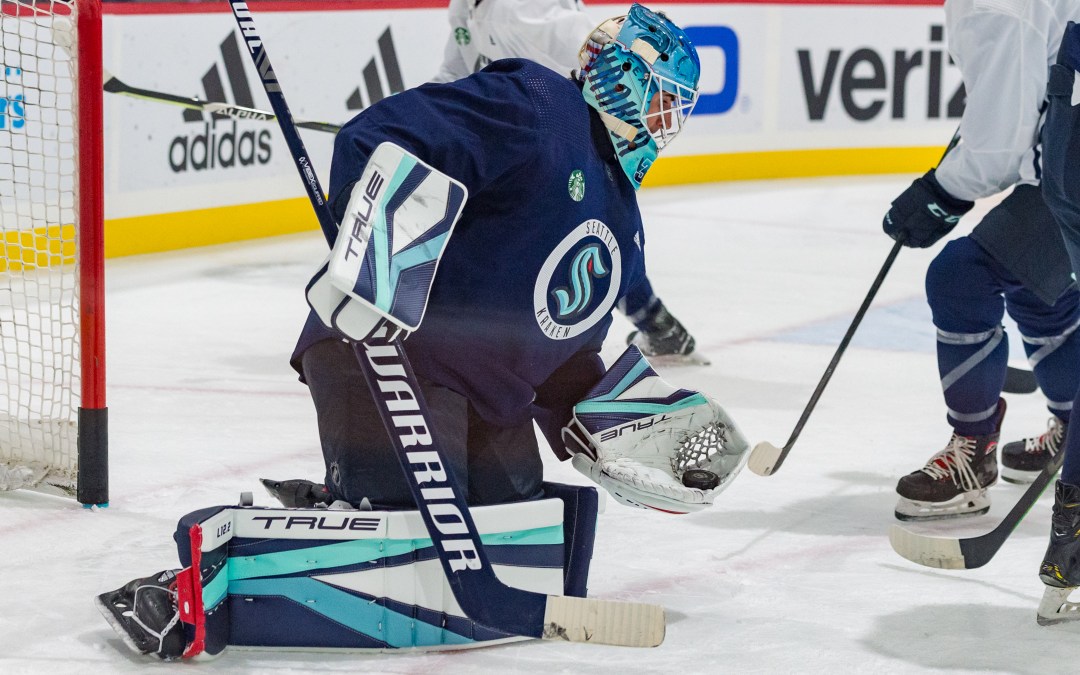 After a first period where the Seattke Kraken fell behind by a pair of goals to the New Jersey Devils Tuesday, it looked like a repeat of Monday’s blowout loss was on the menu again.

But not this time.

The Kraken pushed back in the second period, got their legs under them, and twice got back within one before finally falling 4-2 against the Devils. The Kraken got goals from Riley Sheahan and Jared McCann while goalie Joey Daccord made 29 saves in an emergency start.

“We just ran out of time and ran out of gas a little bit,” Seattle coach Dave Hakstol said.

Despite the loss, the Kraken’s third straight, there was excitement as two hours before the game Seattle announced that center Yanni Gourde was coming off injured reserve and would be playing. It would be Gourde’s debut with the Kraken as he has been recovering from an offseason torn labrum operation.

To say he was ‘recovering’ is underselling what he had been up to. Skating with the team from day one of training camp, it was obvious that Gourde was going to be back prior to the initial target of December. At the start of camp, general manager Ron Francis declared Gourde was ‘ahead of schedule.’

Turns out he was way ahead of schedule.

Gourde was good Tuesday. He logged 21:37 of ice time and centered a line with Jared McCann and Jaden Schwartz. While on the ice together the three took 57% of the unblocked shots. Those are encouraging possession numbers.

They didn’t figure in the scoring – Gourde did pick up an assist on a third-period power-play goal – but had several near misses as passes just eluded or hopped over sticks. Schwartz in particular missed the puck by inches on two great feeds from Gourde.

“It’s pretty tough to come in with new linemates, but I think we did a good job of simplifying things and going north and going deep,” Gourde said. “It didn’t work, we didn’t win but we had some good looks.”

New Jersey’s Dawson Mercer opened the scoring by converting a two-on-one at 5:02 of the first period. A bad pinch by defenseman Adam Larsson combined by no high third forward created the break and for the fourth time this season, Seattle gave up the first goal. Just over a minute later Damon Severson would score for the Devils to build a 2-0 lead.

Seattle’s second period was better, and they missed on back-to-back power plays but came close and built momentum. That led to Sheahan’s goal to cut the lead. The momentum was short-lived, though, as Jimmy Vesey would score before the period ended to re-establish New Jersey’s two-goal advantage.

“Not a whole lot had to be said,” Hakstol said about any intermission pep talk he gave the team. “We came out against a fresh team, and they were quicker than us for the majority of the first period. They won a lot of races and got us on transition for one of the goals. As the period went on, I could see us getting our legs.”

McCann would score on a power play late in the third to give the Kraken life again but the Devils would seal the deal with an empty net goal scored by Pavel Zacha.

After making one start in the AHL with Charlotte over the weekend – he made 26 saves and won 4-1 – Daccord was called on to fly to New Jersey and start the game. It turns out that Chris Driedger injured himself at some point during his third period duty Monday in Philadelphia.

Not the best conditions in which to make your first start, but Daccord showed no nerves or uncertainty. He allowed three goals while making 29 saves. None of the goals he allowed were questionable and he made several big saves to keep Seattle within striking distance.

“Joey was outstanding tonight,” Hakstol said. “He made some huge saves for us. It’s not always about big saves it’s when you make them. Joey gave us both, he gave us big saves and he gave them to us at the right time.”

Driedger was placed on injured reserve but no timetable was offered. Daccord will be with the team for at least the next week.

Other notes and tidbits

There was a lot of talk after the game about Seattle’s lack of practice and how it impacted the Kraken as the road trip wore on. “We definitely need some practice time,” captain Mark Giordano said. “You can see it in little areas of the game.”

Seattle will have Wednesday off before getting back to that needed practice on Thursday.

A night after the team didn’t fight as hard as they would like, the compete level was there Tuesday. “I like the fight and the pushback from the guys,” Giordano said. “I think we’re guilty a little bit of guys caring too much. You start squeezing it and overthinking it because you don’t want to be the guy that makes the mistake. We’ve just got to clean up a few areas.”

In the first period New Jersey’s young star Jack Hughes was taken to the ice hard in the corner by Seattle’s Jeremy Louzon. Hughes got up slow favoring a shoulder and did not return to the ice. Similarly, Morgan Geekie was hit in the face by New Jersey’s Jonas Siegenthaler in the second period. Geekie did not return and there was no update after the game.