A raucous home opener ends in disappointment for the Seattle Kraken 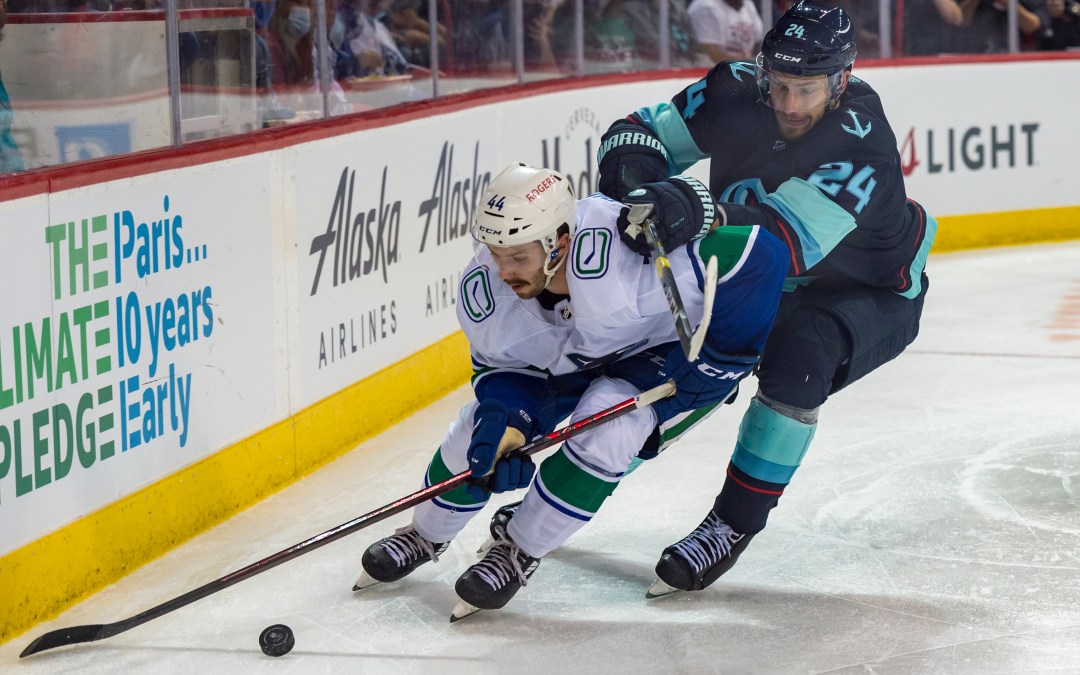 It could have been one of those nights that live on in Seattle Kraken lore forever, and in a way it still will. But what if Nathan Bastian had converted on the Mason Appleton rebound that skipped right off his stick in the second period? What if the Appleton breakaway chance that Thatcher Demko just swept off his goal line had trickled just a smidge faster? What if the pass back to Vince Dunn at the point with four minutes left in regulation hadn’t been out of his reach?

While it was certainly a momentous night that those in attendance will never forget, the outcome did leave a residue in the mouths of Seattle fans, players, and coaches. For as magical as the first game ever at Climate Pledge Arena was—and it really was magical—imagine if Seattle had won.

“It was electric in here all night,” said captain Mark Giordano after the game. “I mean the fans— that’s right up there with any [game I’ve played].”

“I don’t know if you can get more,” coach Dave Hakstol quipped when asked if he wanted to see more from the fanbase. “That was outstanding. Yeah, it was an amazing atmosphere, and you know, the bottom line is we wanted to reward the group in the stands with a win tonight. It’s a sour taste, you know walking out of the rink tonight, and that’s a part of it because [the fans] were awesome.”

Ah, what could have been.

The Kraken are evolving before our eyes

The Kraken have morphed into a very different team after a couple days of practice. Hakstol talked a lot about giving up too much off the rush during Seattle’s challenging two-week road trip that ended with a 1-3-1 record.

Yanni Gourde nearly scored just 15 seconds into the game on a breakaway that Vancouver goalie Thatcher Demko turned away with his blocker. But after that rush, Seattle’s attack was measured during the first period Saturday.

The skaters on the ice would try to get control in the offensive zone, but if there was nothing there, nobody over-committed. Instead, as soon as possession was ceded, all five Kraken players were consistently racing to the neutral zone to set up a trap for Vancouver.

“We settled things down a little bit in the neutral zone in terms of the way we approached our neutral zone play,” Hakstol explained of the altered style. “You talk about having five guys in the picture going both directions, and we did a pretty good job tonight. We didn’t give up a whole lot off the rush.”

In fact, there were practically no odd-man rushes against for the Kraken all night, save for maybe a partial break on the Garland game winner, but even that was the result of a fluky play in the offensive zone.

Vancouver did own the puck and zone time for most of the opening 20 minutes and made Philipp Grubauer work a bit. But most opportunities for the Canucks came from the perimeter, right where Hakstol wants them.

The Kraken finally started to push back late in the period, especially after an impressive penalty kill that featured a big Brandon Tanev hit and a painful Joonas Donskoi shot block, as well as a power play that nearly scored several times.

The Kraken sustained pressure for the final three minutes of the period, and with just three seconds left before the horn Dunn scored the first goal ever at Climate Pledge Arena. With tired Canucks desperately trying to get the clock to zero, Dunn took a pass from Adam Larsson, delayed, and wired a perfect wristshot off the right post and in.

Climate Pledge Arena erupted with the Kraken heading to the dressing room ahead 1-0.

Kraken got the better of the play, but the Canucks got the goal in the second

In the second, the Kraken looked like a different team again. While there was still some trapping whenever they gave up control, they spent most of the stanza with the puck and in the offensive zone and had a couple of very near misses. As Hakstol said, Seattle “tilted the ice” that period.

The first Grade ‘A’ chance came when Appleton put a shot with purpose into the feet of Demko from a bad angle. Demko kicked a juicy rebound right onto the stick of a streaking Bastian, but Bastian partially fanned on what looked like a sure goal.

Later, Appleton had a clear breakaway and fired a shot into Demko’s armpit. The puck squirted through the Canuck netminder and sat right on the goal line for a moment before Demko was able to dive back and sweep the puck off the line.

The Canucks did not register a shot on goal for the first 11 minutes of the period. Then Giordano tried to bank a breakout pass off the boards to Alex Wennberg, but Garland got a stick on it and quickly found Bo Horvat in the slot. Horvat put it right through the wickets of Grubauer, a goal that the Seattle netminder probably wanted back on the first shot of the period.

With the Kraken threatening all period long, it was Vancouver that got the lone goal.

A late penalty and a bad bounce doom Kraken

Giordano atoned for the errant pass and gave the Kraken a 2-1 lead back at 5:09 of the third period, after Jared McCann found him breaking over the blue line.

Unlike other nights when Seattle has had late leads, it did not sit back. Instead, it continued to pressure offensively without sacrificing structure in the neutral and defensive zones.

Still, you could really feel the tying goal coming. Carson Soucy went to the box for the second time at 12:34 after tripping Juho Lammikko, a tough time to take a penalty. It took Vancouver just 18 seconds of power play time before Quinn Hughes put a shot into Grubauer’s pads that Horvat found and deposited for his second of the night.

With the Kraken pushing back and threatening to retake the lead, an errant pass to Dunn at the point was just out of his reach. Garland jumped past the defender and raced through the neutral zone, firing a shot from the right circle that again beat Grubauer through the five hole.

That game winner came at 15:58 of the third and sucked the air out of an otherwise raucous building.

“I liked the way we played in the third, you know taking a penalty at a tough time against a good power play hurt us,” Hakstol said. “And then the one bounce of the game went their way on the game winner.”

The loss was disappointing. It came against what will surely be a bitter rival in Seattle’s emotional home opener. It also came in a game the Kraken really should have beaten a tired group finishing a six-game road trip.

Seattle has found several different ways to lose so far, which have added up to an underwhelming 1-4-1 record. When the Kraken have the game in hand like they did on Saturday, they need to start finding ways to win.

Said Giordano, “We play that sort of game, we’ll be ok more nights than not, I think. We generated a lot more tonight, we created a lot more, and that’s the game. It could go either way. It’s a tight game and they get a couple… They made us pay when they got their chances.”

It’s time for the Kraken to start making other teams pay, or this season could quickly become an uphill battle.

The Kraken are off Sunday. They will practice Monday before welcoming the Montreal Canadiens to Climate Pledge Arena on Tuesday.