Do the Kraken have a shutdown defensive pairing? And other practice notes 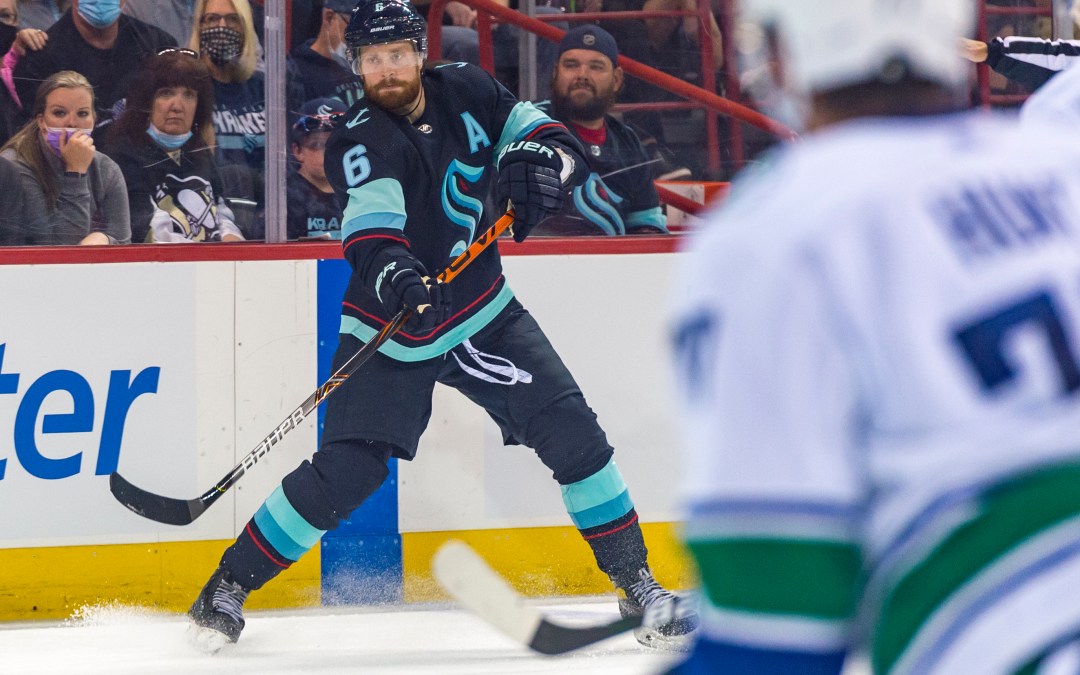 SEATTLE – During Thursday’s 4-1 win against the Minnesota Wild, the Kraken contained the Wild’s top line for most of the game.

That line includes the reigning Calder Trophy winner Kirill Kaprizov who had an assist in the first period but would be rendered unproductive the rest of the way thanks to Seattle’s efforts. After the game Kraken coach Dave Hakstol praised the work that Yanni Gourde and his line did in pinning the Kaprizov line in the Minnesota end, forcing them to play defense, for most of their shifts.

Gourde and company were good, but it takes five guys to effectively shut down a top player. Out with the Gourde line for the Kaprizov matchup were defensemen Adam Larsson and Jeremy Lauzon. The two are quickly developing into what could become the Kraken shutdown pair.

On the evening, Kaprizov ended up only creating one high-danger chance – which came when he stole the puck in the neutral zone from Gourde and walked in alone on a breakaway that was stopped by Philipp Grubauer – while he was on the ice. The Kraken, meanwhile, had four high-danger chances for against Kaprizov and his mates.

During Saturday’s practice at the Kraken Community Iceplex, the two were paired up again.

“As a pair, they’ve worked really well together,” Hakstol said. “They’ve been difficult to play against and they’ve got a little sandpaper to their game. They’ve got some good chemistry and they’re just a pair that communicates very well. They seem to be on the same page on the ice and they’ve been pretty diligent in defending hard and getting us out of our zone.”

They have a small sample size of playing together but the early results are positive. On the season the two have been on the ice for one five-on-five goal against and are coming off a strong game against a talented scoring line.

Hakstol stopped short of calling the duo a ‘shutdown’ line, saying it was too early to solidify a tag like that but don’t be surprised if Larsson and Lauzon log heavy minutes in the next two games – the New York Rangers Sunday and the Edmonton Oilers Monday – in which the Kraken will face offensively talented teams.

Chris Driedger and Colin Blackwell on the ice for Kraken practice

Blackwell, who has yet to play with Seattle as he recovers from an undisclosed lower-body injury was on the ice early Saturday. He did not participate in the practice session but skated on the alternate rink while the main group worked out.

Hakstol said there’s still no timetable for a possible return and classified Blackwell as out ‘indefinitely.’

Goalie Chris Driedger was a participant in practice and took some reps in net.

“I’m not ready to put a timeline on it,” Hakstol said about Driedger. “We’ll probably get to the point where we’re day-to-day with him, but he’s still got some work to do.”

Driedger was injured during an Oct. 18 game at Philadelphia.

The talk of the hockey world has been the report that was released last week dealing with the Chicago Blackhawks’ mishandling of a sexual abuse incident involving a player and one of their video coaches. The fallout has been the resignations of general manager Stan Bowman and Florida coach Joel Quenneville.

Former Everett Silvertip Kyle Beach came out the following day to reveal he was the ‘John Doe’ in the report and detailed his horrific experiences during a TSN interview.

Hakstol was asked his thoughts on Saturday.

“In the case with Kyle it’s obvious and apparent that the organization in Chicago did not handle it well,” he said. “At the end of the day, they failed a young man working to come into this league. That’s my initial takeaway and reaction to it. And we all have a responsibility, whether or not it’s in our sport or in any walk of life, we have a responsibility to make sure that things like that are not acceptable and have no place.”

Mason Appleton out and Max McCormick back from Charlotte

Appleton was hurt during the second period of Tuesday’s game against Montreal, and Hakstol said that the forward is out indefinitely. Max McCormick has been called up from AHL Charlotte and was on the ice Saturday after a long day of traffic.

“I flew from Providence to Newark, and then went through Newark to Seattle,” McCormick said about his day of travel. “And when I got in Seattle some people saw the sticks and the hockey bags and were asking me ‘Are you playing for the Kraken?’ and ‘I’m gonna be at the game on Sunday,’ that type of thing, but for the most part, you get through there pretty easily.”

He said that he kills time on the plane by listening to podcasts or watching the latest episode of ‘Succession’ on HBO.

What podcasts are a NHL/AHL player listening to these days?

“My favorite podcast is ‘Meateater,’ he said. “Big ‘Meateater’ fan.”