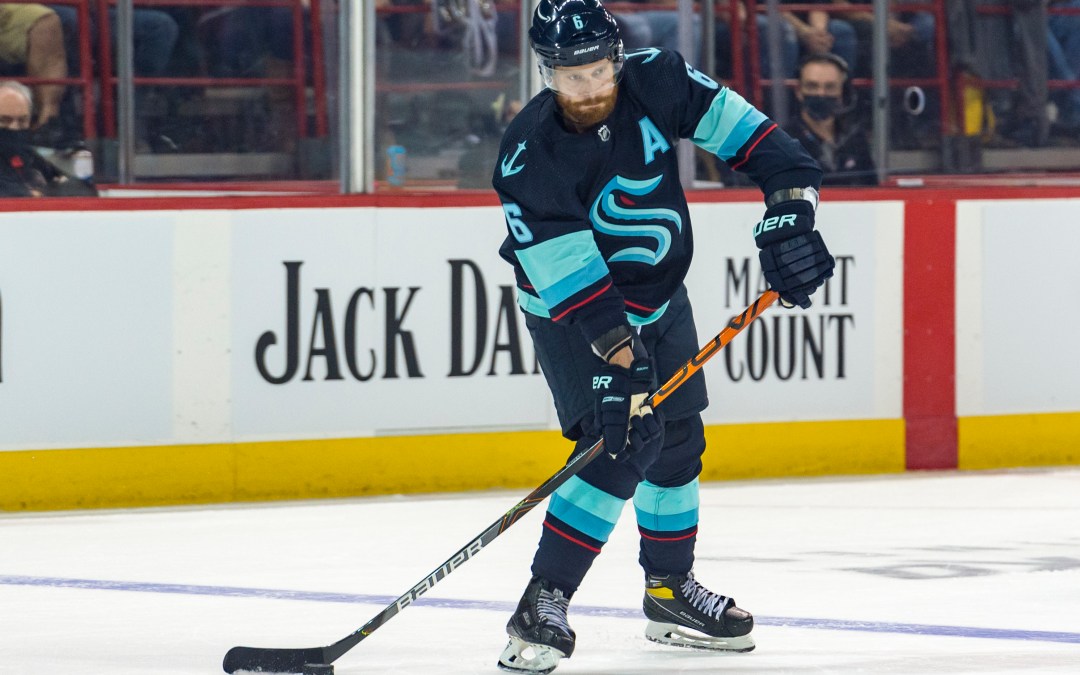 Sunday’s game against the Rangers was always going to be a tough test for the Seattle Kraken, but things ratchet up another notch Monday against the Edmonton Oilers for a number of reasons. Not only do the Kraken take on one of the best offensive clubs in the NHL, which features two of the league’s best offensive players, but they’re doing it on the second night of a back-to-back set with travel. Winning on the road in this scenario is no easy task against any opponent, let alone against Connor McDavid and Leon Draisaitl.

Coach Dave Hakstol made the decision on Sunday to stick with starting netminder Philipp Grubauer for the first game of the set, rather than saving him for when the team would be tired and facing an even more dangerous offense. So Joey Daccord gets the nod tonight, and with Chris Driedger looking closer and closer to a return, this could be Daccord’s last start before he gets returned to AHL Charlotte.

Daccord’s first start came in a pinch the last time the Kraken were on the second of back-to-backs. After Driedger was surprisingly placed on injured reserve after coming on in relief in Philadelphia on Oct. 18, Daccord got the call-up and the nod against New Jersey on Oct. 19. He played well that night, especially under the chaotic circumstances. Daccord stopped 29 of 32 shots and made some very timely saves against the Devils, but the Kraken ultimately came up short.

Just before Sunday’s game, Kraken PR broke the news that Jared McCann and assistant coach Paul McFarland had been placed into COVID protocol. To deal with McCann’s absence, Max McCormick—recalled after Mason Appleton was officially placed on IR over the weekend—was slotted onto the fourth line and Ryan Donato was elevated.

That alteration seemed to have the lowest possible disruption to what the team had practiced with the day prior, as Jaden Schwartz, Alex Wennberg, and Joonas Donskoi stayed together, as did Brandon Tanev, Yanni Gourde, and Calle Jarnkrok.

On Monday morning, Hakstol was asked in his media availability if there would be any other changes coming to the lineup, and he said, “We’ve got some decisions to make at gametime and as we go through the afternoon.” Does he mean shuffling the lines again, or does he mean players coming in or out?

The team has shown a few times now that it prefers to hold on announcing significant changes to Seattle’s active roster until as close to gametime as possible. Examples are the clearing of four key players from COVID protocol prior to the Vegas game, Yanni Gourde returning from injury for the New Jersey game, and now McCann missing Sunday’s game against the Rangers.

Perhaps we’re reading into it too deeply, but we’re curious what those decisions are that Hakstol and his staff need to make, especially with a player and a coach in COVID protocol as of Sunday.

With that in mind, we aren’t even going to take a stab at the projected lineup for now, but we will add it after warmups, so feel free to circle back here at gametime.

Update: The only change to the lineup is Carson Soucy drawing back in for Haydn Fleury. Hakstol loves to keep us guessing.

Hakstol was also asked Monday what makes McDavid so good. “Well, how much time do we have?” he quipped. “He’s a very special player. There’s not much that I can say that can bring to light anything new on Connor McDavid. He’s an absolutely dynamic player, and one of the things that stands out for me is his competitive nature. It seems every year that I’ve been able to see him there’s a new piece to his game, something new that he’s tried to round out and improve upon.”

Though the current season is young, McDavid is on an even hotter pace so far with seven goals and nine assists (7-9=16) through just seven games played.

The Oilers also added a key piece in the offseason in Zach Hyman who has been impressive, scoring six goals in seven games. The former Maple Leaf is expected to skate on a potent top line with McDavid and Jesse Puljujarvi, while Draisaitl will go with Ryan Nugent-Hopkins and Spokane’s Kailer Yamamoto.

Where the Oilers have always been vulnerable is on the blue line and in net. The roster took a hit from this standpoint when Adam Larsson was selected and signed by the Kraken during the Expansion Draft, and there was plenty of interest from the Edmonton media about the defenseman’s return, showing that he was valued in that market.

Despite this, former NHL Seattle advisor and now Oilers coach Dave Tippett has his team playing well at both ends of the ice, and the result is an impressive 6-1-0 record.

The Kraken lost Sunday due to a couple of lapses in transition. They will need to really batten down the hatches in the neutral zone to avoid a track meet with this explosive Edmonton Oilers team.