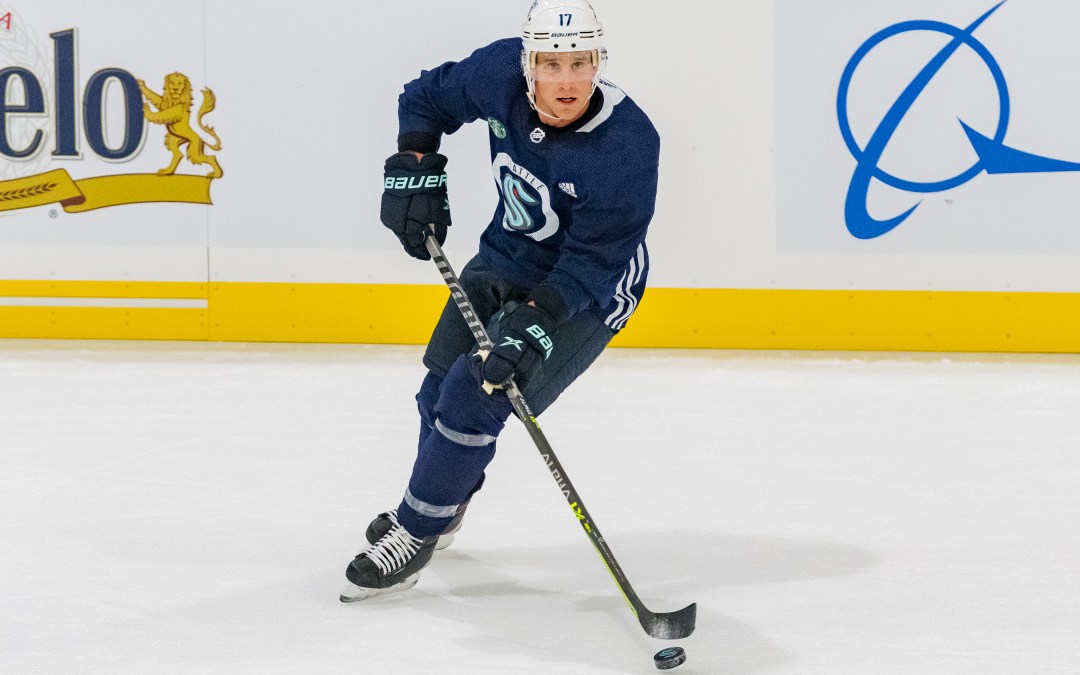 The script for the Seattle Kraken Monday looked awfully familiar as they fell 5-2 against the Edmonton Oilers.

Seattle (3-6-1) outshot and out chanced an offensively talented Oilers team but could not get enough goals to come out with two points on the road. It’s the same script as the night before in a frustrating loss to the New York Rangers.

“We had good chances tonight,” Kraken coach Dave Hakstol said. “We had good chances off the rush and off of some good offensive opportunities…that’s the way it’s gone for us the last couple of nights so we’ve got to push and find ways to change that.”

Edmonton (7-1-0) were led by a two-goal, two-assist performance from Leon Draisaitl and the Oilers were able to get a lead early and add on after the Kraken had cut the lead to 3-2 in the second period.

Jaden Schwartz scored his first for the Kraken, Carson Soucy scored as well, and Joey Daccord made 18 saves.

They held the Oilers to eight shots on goal at 5-on-5, they forced 30 scoring chances to 19 against, and had 56% of the quality shot attempts. If you didn’t look at the score, you’d think Seattle walked away with an easy win.

That’s not how it ended up though.

Things started rough as Draisaitl had a puck ricochet off his skate in front of the net and in at 2:12 in the first period. After Schwartz tied it, Draisaitl would score again on a power play when he tapped in his seventh of the year on a down low 2-on-1.

The Oilers power play is tops in the league and entered the game clicking at 47.8%. Monday it went 1-for-3.

“It’s a tough power play to handle, they have a lot of different looks,” Hakstol said. “We got a save or two from Joey on the PK and I thought the PK after that first goal against worked hard and did a good job to fend off their opportunities.”

Edmonton built a 3-1 lead in the second before Soucy cut the lead at 18:40 to set up a third period where Seattle trailed by just one. The Oilers would add on though, getting an early third period goal from Kyle Turris and an insurance mini breakaway goal from former Spokane Chief Kailer Yamamoto.

Seattle’s lack of goal scoring this season is not for a lack of chances.

They’re 11th in the league in 5-on-5 unblocked shot attempts, getting 52 percent of them, they’re getting more quality shots than their opponents, and they have been creating 53 percent of the scoring chances through the first 10 games.

But they are only averaging 2.5 goals per game.

They have had some bad puck luck and Monday there was a hit post and a chance from Jamie Oleksiak that slid across the crease, inches from the goal line that somehow stayed out.

“We look at the positives,” Oleksiak said. “It’s been a few games where we’re right in there and if we get the goal at the right time, we have a different record… we’ve just got to bear down.”

The lack of consistent scoring is a concern but the shots and chances the team is creating is the positive. Goals have to start coming at some point, right?

“It’s frustrating. The last game was right there for us and so was today,” Schwartz said. “They were opportunistic to start and we had a lot of chances and good looks and we’ve just got to find a way to put them in the net… our power play has to start executing better for us to get us on the board and get us momentum.”

After a four-game homestand where the Kraken went 0-for-14 with the man advantage, Monday it didn’t fare any better.

Seattle was 0-for-3 on the night with six shots. Scoring would help but the Kraken would hope to at least gain some momentum from the man advantage, and it hasn’t been happening enough.

Despite a penalty kill that came into Monday as the league’s third best, Seattle is losing the special teams battle.

– Jared McCann missed his second straight game Monday and remains in the Covid-19 protocol. Max McCormick was in the lineup again and played 9:03 with two shots.

– Seattle’s next two games are winnable as they host the Buffalo Sabres at Climate Pledge Arena Thursday before traveling to Arizona Saturday to play the winless Coyotes.