Inside the mind of Kraken netminder Chris Driedger 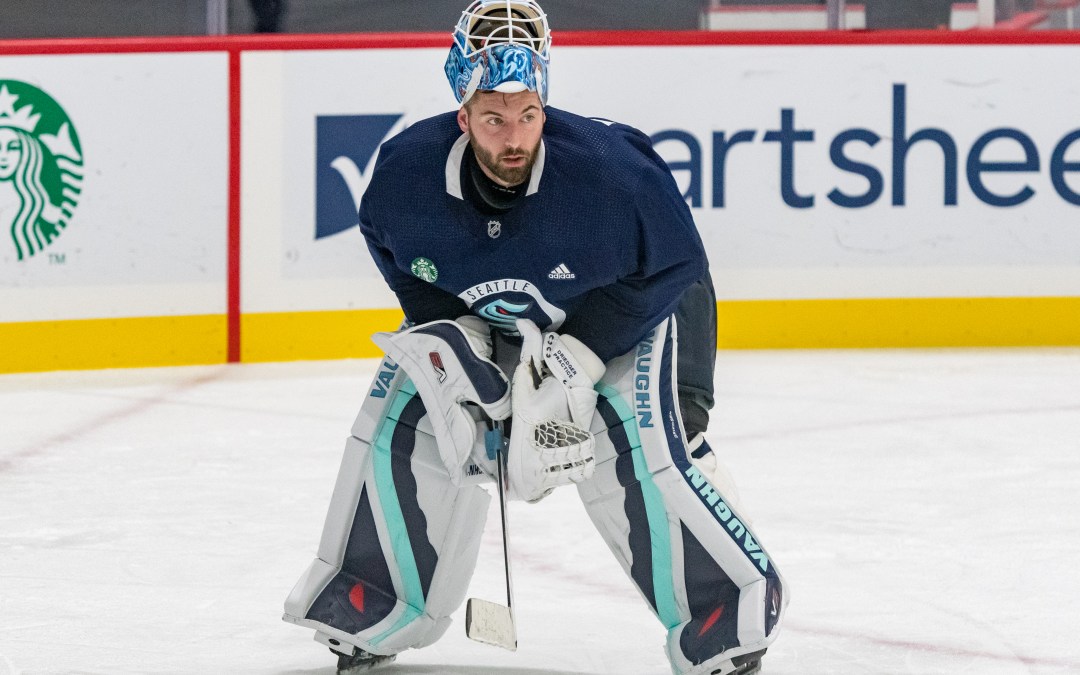 The Kraken were playing a preseason game against the Calgary Flames in Kent, Wash., and Chris Driedger was in net for Seattle. Partway through the third period, he made a butterfly save and got a whistle. We watched him do a little twirl to the corner and return to his crease. There, he banged his stick on the posts a couple times, then reached over his right shoulder with that stick and touched the back bar of the net.

Many goalies skate to the corner and bang their posts, but that over-the-shoulder move is unique. We couldn’t help wondering why he was doing that, and how that routine started for Driedger. So we asked. And we learned a lot more about his psyche along the way.

Goaltending is a fickle beast

The goaltending position in hockey is a fickle beast. You can come into a game feeling on top of the world, thinking you’re ready to stop everything thrown at you, and within minutes of the opening face-off, you can fall so deep into the abyss of your own thoughts that you don’t believe you’ll ever stop another shot.

This is why some goalies who are talented and physically gifted do not make it to high levels. You can have the lightning-quick reflexes and ballet-like flexibility that is required of professional goalies. But if you don’t have the mental fortitude to quickly shake off a bad goal or a bad night, you will not come close to reaching those levels.

It’s that mental fortitude that separates the good from the great.

We recently chatted with Kraken netminder Joey Daccord on the Sound Of Hockey Podcast, and he was forthcoming with what happens in his mind before and during games. You can hear this topic discussed at length starting around the 27-minute mark of the episode below.

Daccord and Driedger have spent the last few summers training together in the Boston area, where Daccord’s dad, Brian—a goaltending guru who also works for the Arizona Coyotes—owns and operates the “Stop It Goaltending” school.

If you notice any similarities between what Driedger and Daccord do to keep themselves in the moment, it is not a coincidence. This is something they discuss at length as part of their offseason training because the mind is just as important to a netminder as the body.`

Inside the mind of Chris Driedger

Driedger does not aim to stay focused on what is happening in the game. Instead, he tries to keep his mind completely clear throughout. No thoughts, no distractions.

But he also knows that keeping the brain from wandering over the course of a long hockey game is easier said than done, so he employs ­several tactics to allow him to get back to “flowing,” as he calls it. We’ve all seen goalies skate to the corners during stoppages in play, and while it looks to the casual fan like they might just be bored, Driedger says there’s a mental benefit to doing that.

“It’s just a routine that you don’t have to think about and gives you a mental break. You don’t have to focus at all. You get a little cool air in your face, which feels phenomenal because obviously you’re pretty hot in your gear.”

When Driedger returns from his jaunt, he goes through his post-hitting routine, which is so common amongst his goalie brethren. But he adds that unique flourish by touching the back bar of the net with the toe of his stick blade. So where does that come from?

Local fans may recognize that move from the repertoire of a former Seattle Thunderbird.

“I think I actually copied another goalie from Winnipeg when I was probably 12 years old,” Driedger explains. “Calvin Pickard is from Winnipeg, and I think I saw him doing it, and he was the man growing up. I’m two years younger than him, and he was playing AAA or whatever… That was his routine, and I was like, ‘Oh, that’s pretty cool, let me try it.’”

Driedger uses a comparable mantra to Daccord when it comes to his pre-game preparation.

Daccord tries to think of the things he does as “routines,” rather than “superstitions.” As he mentioned on the Sound Of Hockey Podcast, when you have superstitions and something happens on gameday that doesn’t allow you to complete one of your regular steps, that can have a huge impact on your performance because it throws you off mentally. That’s why Daccord thinks of them as routines, because not doing something on a given night or doing something slightly out of order really means nothing in the scheme of things.

Driedger has a good explanation for why this shift in thinking is important. “If you don’t do a routine, it’s not like a night ruiner. One game in Florida two seasons ago, we had Luongo’s retirement ceremony. The communication was kind of weird, so we got to the rink, and they were like, ‘Oh, yeah, by the way, you guys need to be dressed [and ready for] warm-ups in 30 minutes.’”

An event like that could push a goalie over the edge. They’ll typically get to the arena hours in advance and have plenty of time to go through their rituals, get dressed at a leisurely pace, and prepare their minds for battle. That night, Driedger did not have that luxury, but it still wasn’t enough to destroy his mental state for the game.

“If you have superstitions, rather than routines, and you don’t do them, you let it [get to you]. ‘Oh, no, I didn’t juggle before the game, are my hands going to be good?’ That’s a negative thought and it’s not going to help you.”

Of course, Driedger tries to complete all his regular routines before each game, but sometimes things are out of his control. Knowing that and knowing that the world will not end if he skips a step or two helps him be ready even on nights when things go haywire.

The slippery slope of the slump and how to avoid it

Slumps for a goalie can come from nowhere. One bad goal leads to a bad game, and a bad game can lead to a bad week. Then suddenly you’re viewed as “struggling,” and nothing you do seems to work to get yourself back on track.

“Yeah, I mean, it’s definitely a slippery slope when you start over-thinking,” Driedger says. “At its core, it just comes down to your confidence in yourself. And if you let in a goal, whether it’s a good goal or a bad goal… obviously bad goals are harder to cope with mentally. I tell myself when I let in a bad goal, ‘That’s a bad goal, but I don’t let those in very often.’”

For Driedger, knowing that bad goals are a rare event helps him shake them off quickly. But even he acknowledges that it’s easy to let doubt creep in when pucks get through that he knows he should have stopped.

“If you go the other way and you say, ‘Oh, shoot, that’s a bad goal, maybe I’m not ready for this,’ or ‘Maybe this isn’t my night, maybe I’m not feeling good.’ That’s negative self-talk that just snowballs throughout the night, and then all of a sudden—we talked about having a clear mind—your mind’s not clear if you’re doubting yourself.”

Bad goals go in sometimes, even when a goalie is playing with confidence. But if he can put it out of mind quickly and move on, knowing it doesn’t happen often, Driedger believes he can nip it in the bud before it grows into a real problem his mind.

Much like the body, the goaltender’s mind needs many years of training to prepare it for the top echelons of hockey. There are different methods to get the mind into tip-top shape, and with every goalie being different, not every method works for every individual.

For Driedger, he credits a sports psychologist that he visited when he was playing in the WHL for the Calgary Hitmen for putting him on the right track. He first reached out to the psychologist because he had started the season poorly and wanted to improve the mental side of his game. Scheduling challenges allowed months to go by, and by the time he finally met the psychologist, things had turned around on their own.

At that point, Driedger had started playing outstanding hockey, so he wondered if he needed to have the meeting at all. He decided to go through with the appointment, but it did not have the intended effect.

“I started using [the psychologist], and now I’m thinking [during the game] about these mental strategies that he was telling me. And my game drops because I’m thinking about them rather than just flowing with it,” Driedger recalls. “But long term, it was invaluable to work with this guy. He was incredible, but just in the short term—it takes a little bit of time to make the processes feel natural, and then you go through some growing pains.”

Of course, that wasn’t the end of the story for Driedger. It’s a never-ending process to strengthen his mind as he continues to strive to be the best goalie he can be. “That’s got to be eight or nine or 10 years ago now. So it’s good to get those things out of the way early, and you can kind of do more refinement as you get older and further along into your career.”