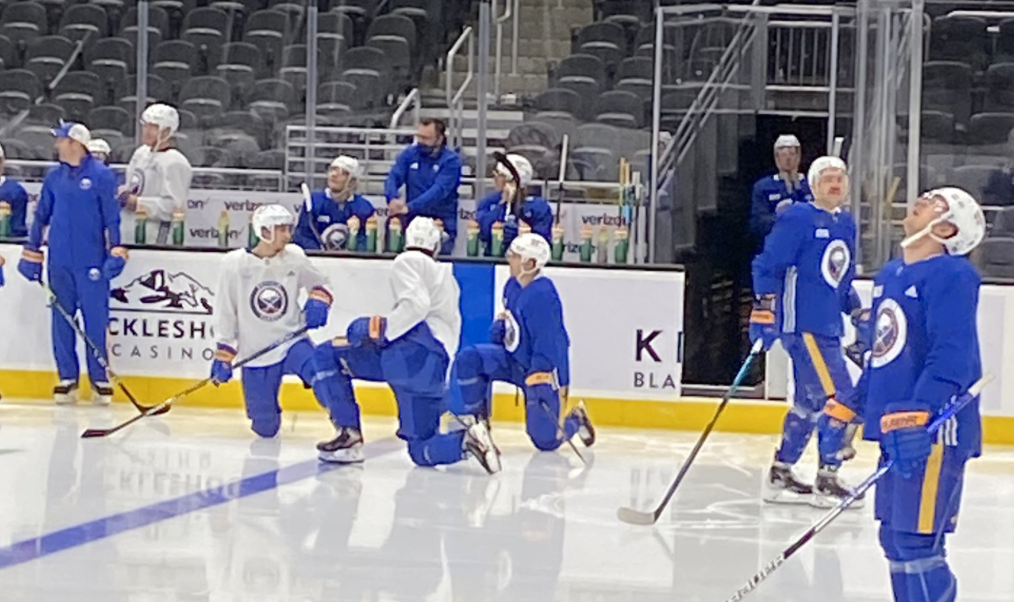 Typically when we prepare these game previews, we’re very focused on what has been happening with the Seattle Kraken. Other than Chris Driedger returning from injured reserve and Joey Daccord being assigned to Charlotte, there hasn’t been all that much happening the last few days, though, so move along, nothing to see here.

And obviously there’s nothing happening on the other side with the Buffalo Sab— [record scratch, author listens to breaking news in earpiece]… They did what?! Ladies and gentlemen, we’ve just received word that something major has happened with the Buffalo Sabres after all! It turns out they’ve traded their former captain and former No. 2 overall pick, Jack Eichel, to the Vegas Golden Knights for a package that includes Alex Tuch, Peyton Krebs, and draft picks.

The Kraken are expected to come back with a very similar lineup on Thursday to what we saw in Edmonton on Monday, but Haydn Fleury is slotting back in for Carson Soucy on the blue line, and Philipp Grubauer will get the start.

The Fleury/Soucy rotation has been an interesting one. Really neither deserves to be scratched, and both have been contributing offensively lately—Fleury had two goals against Minnesota, and Soucy had one against the Oilers—but this is what happens when you have this many NHL defensemen on your roster. Simply put, somebody has to sit.

And let’s not forget about Will Borgen, who has yet to even dress for a game and will be scratched again Thursday against his former team.

On Wednesday after practice, coach Dave Hakstol indicated that this won’t change any time soon for Borgen, adding that the seven players that have played for Seattle at this point won their spots out of training camp.

Also at practice on Wednesday, the Kraken spent a few minutes working on their power play. Seattle has struggled in this area, clicking just three times in 32 attempts, good for 30th in the NHL, though it has gotten good looks and plenty of zone time.

Jack Eichel no longer a Sabre

The fact that Eichel was on the trade block was the worst-kept secret in hockey after he had publicly requested a trade, was stripped of his captaincy, and was closing in on filing a grievance against the team for not allowing him to get the disc replacement surgery that he desires. So while it wasn’t shocking to hear that he had been traded, it still felt like one of those things that might never really happen, especially after it dragged out all summer long.

But traded he was to the Vegas Golden Knights in the wee hours of Thursday morning.

Since Eichel was out with the long-term neck injury anyway, Tuch is still working his way back, and Krebs is heading to the AHL, there really is no impact on Buffalo’s lineup for tonight. The effect down the line will be dramatic from a Seattle perspective, however, as it now will have to face Eichel and an already loaded Golden Knights team up to four times per season.

As for the current Sabres, the hockey world was surprised to see them get off to a hot start, winning their first three games to begin Don Granato’s tenure as their full-time head coach. Since those three games, they lost two, won two, and lost two more, with those most recent defeats coming at the hands of the Los Angeles Kings and a COVID-riddled San Jose Sharks squad.

This is a winnable game for the Kraken, but Buffalo also cannot be taken for granted, as they have already caught several opponents off guard this season.

Leading scorer Victor Olofsson is out tonight for the Sabres, which should make things a bit easier defensively on the Kraken. Dustin Tokarski gets the start in net. He has been good in three appearances, posting a 1-1-1 record with a 1.92 goals against average and .936 save percentage.