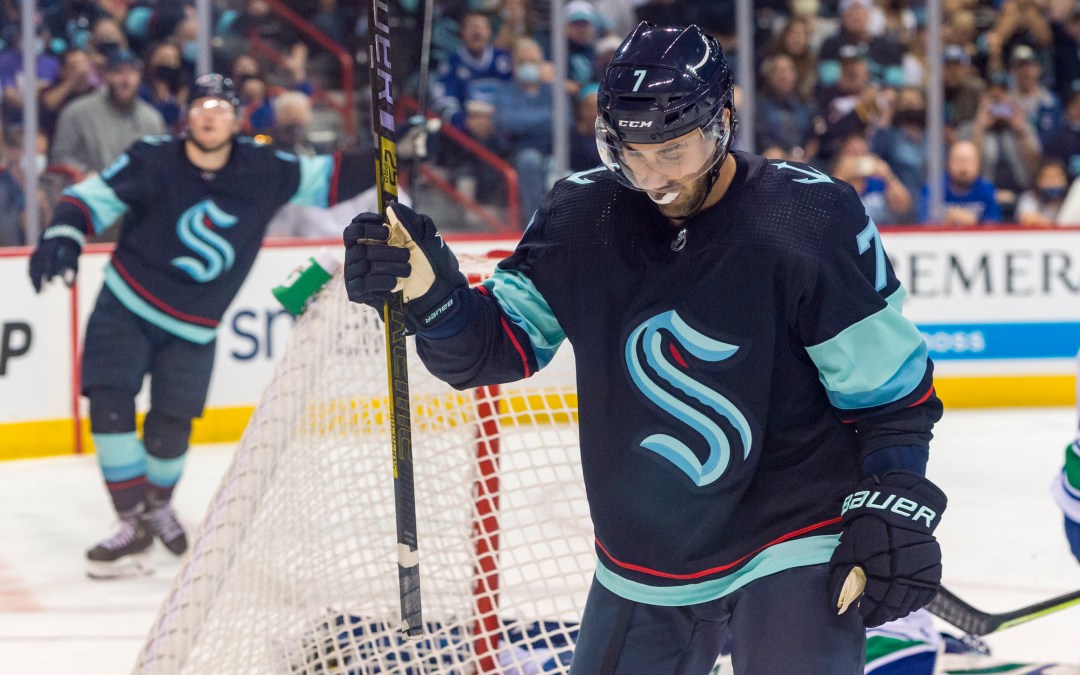 Stop us if you’ve heard this one before. The Kraken were the better team Thursday but had a hard time finishing on their many chances. Sounds familiar right? The difference between this contest and others, though, was that Seattle did not come out and immediately concede a goal in the opening minutes. The team was not chasing the game early, as it did in Edmonton on Monday and against the Rangers on Sunday.

On Thursday, it almost always felt like the Kraken were going to come out with a win, but as players squeezed their sticks into sawdust and fumbled away breakaway after breakaway, doubt certainly crept in for some.

One guy who is officially no longer gripping his stick too tightly after Thursday’s game is Jordan Eberle, who was held goal-less through the team’s first six games of the season. He scored once against Montreal, once against New York, and Thursday he erupted, posting the first hat trick in the history of the Seattle Kraken franchise.

“Definitely, when you’re scoring, you feel good, and the net looks a little bigger,” Eberle said after the game. “There’s a lot of different ways to score… The biggest thing is getting one or two looks a game and when you’re finishing them and you have the confidence to do it, that’s big.”

His performance in leading the Kraken to a 5-2 win over the Buffalo Sabres should give Eberle plenty of confidence moving forward.

Off on the right foot this time

The Kraken clearly made a point of not falling behind early in this one. After seeing the opposition score early in so many first periods this season, Seattle came out flying on Thursday and controlled the possession for the bulk of the opening frame. But as has become the norm, the Kraken were having a hard time breaking through on netminder Dustin Tokarski early.

13 minutes into the game, Jamie Oleksiak got tied up along the wall in the defensive end with John Hayden. It’s hard to say if Hayden knew who he was challenging, but he started swinging and left Oleksiak with no choice but to drop the gloves. In a blink Hayden had consumed half a dozen knuckle sandwiches from the Big Rig. Adding insult to injury, Hayden got an extra two minutes for roughing and put the Kraken on the power play.

That extra Hayden penalty proved costly for Buffalo. Seconds after the penalty ended, Alex Wennberg threaded a pass through the seam and found Morgan Geekie in the left circle. Geekie wasted no time and blasted it past Tokarski.

Jordan Eberle to the rescue

The second period left Seattle fans groaning at times. Fortunately, Eberle made them believe again before the end of the frame because otherwise there may have been a mutiny on the S.S. Climate Pledge.

With the Kraken continuing to dominate possession, they somehow let Tage Thompson walk the puck from his own end all the way through the neutral zone and into their end. On what amounted to a one-on-four rush, the 6-foot-7 Thompson lumbered in untouched and eventually let a shot go that—with the help of a Haydn Fleury screen—beat Grubauer.

Max McCormick then took an ill-advised offensive zone penalty at 16:10 when he boarded Will Butcher, causing the Buffalo defenseman to hit his face on the glass. The Sabres took advantage. With Zemgus Girgensons screening Grubauer, Kyle Okposo scored from the right hash, giving Buffalo a 2-1 lead and temporarily sucking the air out of Climate Pledge Arena.

That was when Eberle put the team on his back. Just 26 seconds passed between Okposo giving Buffalo its only lead and Jaden Schwartz digging out a puck in the corner and putting it right on the tape of Eberle in front. Eberle buried it just under the bar, and Seattle was back in business.

Schwartz and Rasmus Dahlin—who had a tough night that featured two embarrassing self-inflicted nosedives—got into a shoving contest at the horn, meaning the third period would open four-on-four.

A sigh of relief for Kraken fans

With the extra space afforded by the four-on-four and Butcher inexplicably swimming in the slot, Eberle had plenty of room to work. Wennberg was at the blue line and slipped the puck to him at the top of the left circle. Eberle danced around Okposo, got in close with Tokarski, and lifted it over his right pad for his second of the night.

Eberle struck once more six minutes later when he took a Schwartz pass in the neutral zone, rushed in, and snuck one through the pads of Tokarski, a goal the Sabres goalie probably wanted to have back.

Down came the hats, as Eberle celebrated the first hat trick in franchise history with his mates.

Schwartz sealed it with an empty netter at 18:43, and Dahlin got really mad and did this…

Here are our takeaways from the victory.

Takeaway #1: The Kraken could use some more finish

If you were to look at the score alone, you’d probably think that was a solid offensive night by the Kraken. In a way, you would be right with that assessment. The team put up five goals, and Eberle blew open the floodgates with a hat trick. But in a game that should have been out of reach midway through the second, Seattle found itself trailing 2-1, albeit for a very brief period.

We counted five breakaways for the Kraken, on which they converted zero times. They dominated every possession metric from start to finish, and yet the game was close enough in the end that Buffalo pulled its goalie to try to level the score. Frankly, Seattle should have put up at least eight against the Sabres on Thursday, but the team’s lack of finish continues to be a bit concerning.

The good news is that there was an eventual breakthrough, which hopefully relieves some of the pressure to start scoring goals. The guys that the Kraken need to be their offensive leaders—the Eberles and Schwartzes of the world—are starting to produce. Seattle also now heads to the desert to face an atrocious Arizona Coyotes team that has given up 42 goals in 10 games.

Takeaway #2: Morgan Geekie belongs on the left side on power plays

We’ve never been fans of having your biggest cannons on their strong side for the power play. As a right shot, putting Geekie on the left halfwall allows him to open up and be ready to blast away when pucks are fed to him. Previously, he had been on the right, where he had to catch the pass and circle around it before he could let it go.

Though it wasn’t technically a power-play goal, Geekie’s goal came just seconds after a Buffalo penalty had ended in the first period. It was created by the power play, no question, and having Geekie on the left feels like a key that could unlock something for this struggling special teams group.

“There’s a couple different looks,” Hakstol said. “With wanting to simplify a few things, you know, you put guys on their one-timer sides, and you’re looking to get the puck to the inside. Buffalo came a little harder with their kill tonight than maybe they usually do, but he was able to get off a couple of good shots from that spot. That second one found its way into the back of the net… It was nice to see it go directly in, but if it doesn’t that should give us a good opportunity at a rebound.”

Speaking of the power play, we’ve also always thought it’s a good sign to see passes through the seam rather than around the perimeter. Those passes are harder to complete, but when they get through, they’re also harder to track and give the goalie a lot less time to get across. Again, it wasn’t technically a power-play goal, but Geekie’s goal came off a seam pass by Wennberg.

Seeing a goal set up this way and scored by one of Seattle’s big shooters is a great sign for the struggling power play, which is now officially 3 for 36 on the season.

After rightfully being named the first star of the game, Eberle was handed the traditional salmon stuffed animal to throw into the crowd. Rather than softly tossing it over the glass, he twisted that thing around and whipped it a good ten rows deep into the lower bowl. We asked him about the throw after the game.

He explained, “I live downtown, so I go to Pike with my little girl quite a bit to get groceries, and I see them throwing the fish, so I wanted to make them proud.”