‘Fragile’ Kraken give up two leads, lose 4-2 to Vegas 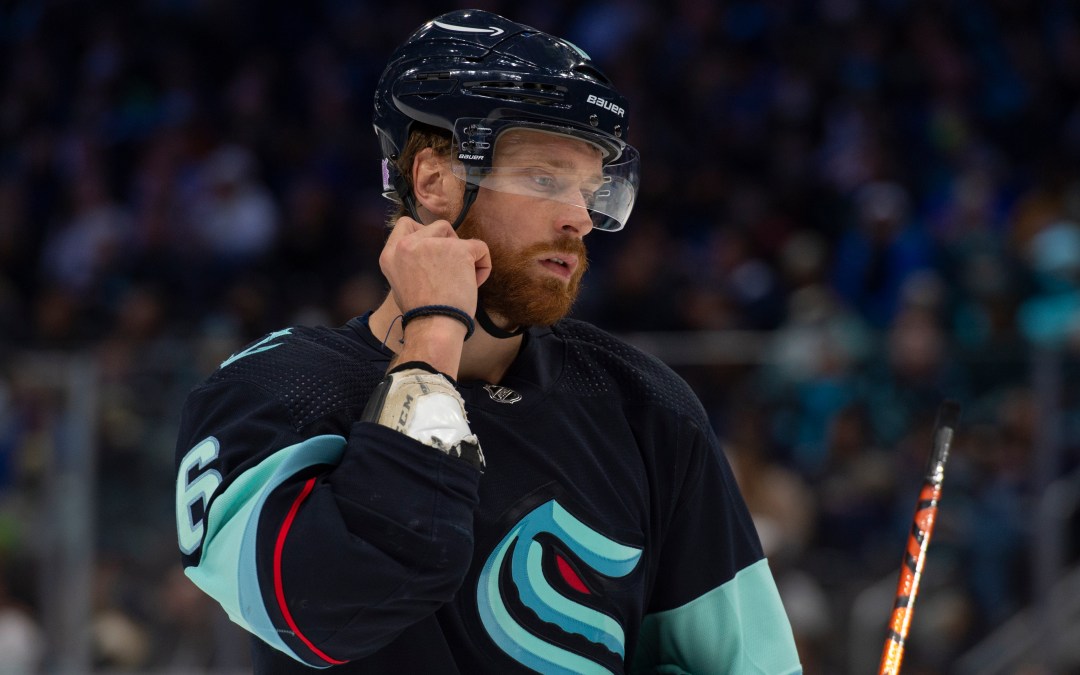 What looked promising for the Seattle Kraken Tuesday at T-Mobile Arena in Las Vegas turned bad in just 1:33 of game time and they lost 4-2 against the Vegas Golden Knights.

It was the second straight loss on the road for Seattle (4-8-1) in which it held a lead, and Tuesday had a familiar odor to the disappointing loss Saturday in Arizona.

After a dominating second period, Yanni Gourde scored a goal to put Seattle up 2-1 with 31 seconds left in the period. Instead of building momentum, it would be Vegas (7-6-0) who tied the game on a goal from Evgenii Dadonov on the next shift with 15 seconds left before intermission.

The Golden Knights rode that wave to score twice on goals from Reilly Smith, one at 30 seconds and again at 1:16 of the third period, to take a two-goal lead and sail to a win. Goalie Robin Lehner made 25 saves, 10 of which were in the third period, to squash any Kraken notions of a comeback.

“This was a hard loss,” Kraken coach Dave Hakstol said. “We worked really hard to be in a position going into the third period and that slipped away. We’ve got to reset, practice tomorrow, and get ready for a game Thursday.”

Chris Driedger made his first start in net for Seattle and allowed four goals on 23 shots. Gourde’s goal was his second in two games and third on the season. Eberle scored his seventh goal in seven games to open the scoring in the first period.

It was in the second that the Kraken were gaining control.

Seattle took 75 percent of the unblocked shots at 5-on-5 and 75.8 percent of the quality shots. They also drew two penalties as the ice was tilted and the Kraken were controlling things. They took a deserved 2-1 lead when Brandon Tanev hit a streaking Gourde in stride for a go-ahead goal.

With time running down in the period a Shea Theodore shot was stopped by Driedger, but he couldn’t control or find the rebound and it was poked in by Dadonov to make it 2-2.

“We have to go into the intermission up by one,” Hakstol said. “That’s a goal we can’t give up. We got caught with an out numbered situation at the net on a throw in. That’s a little too easy.”

Vegas grabbed the lead when a Theodore point shot was tipped by Smith in the slot causing Driedger to miss it with his glove. Smith would then knock in a touch pass in front on a Vegas power play to make it 4-2 and sap the life out of the Kraken players.

Driedger had a similar struggle with the glove late in the first period with the Kraken up 1-0. Vegas defenseman Alex Pietrangelo threw a shot on net that seemed to surprise Driedger. Despite getting a piece of it, he was not able to keep it out of the net.

“There’s a couple he’d probably want back,” Hakstol said of Driedger’s game. “He’s got to reset and be ready to go back to work at practice tomorrow.”

The last two games have been a struggle and wiped away the good feeling last week’s win at home over the Buffalo Sabres gained. Trends are starting to emerge as the Kraken can’t find a way to cash in on repeated stretches where they control the play, and they are still looking for timely saves from their goaltenders.

Finishing a team once they’ve built a lead still appears to be a lesson that the team needs to learn.

One bright spot Tuesday was Seattle finally cashing in on a power play. It came in the first period after Gourde goaded Vegas’ Chandler Stephenson into taking an unsportsmanlike penalty for grabbing Gourde’s visor.

Eberle would then find a rebound in front and score on the backhand. It snapped a streak of 23 straight failed power play attempts.

In a touch of irony, Seattle failed on two second-period power plays which would have gone a long way to giving them a two-goal lead and change the tone of the contest. Even when the power play works the Kraken still managed to have it let them down.

“We’ve got to get feeling good about ourselves,” Mark Giordano said. “In tight games, we’ve got to find a way to still make those plays.”

— Marcus Johansson returned to the lineup Tuesday for Seattle. He last played in the season opener, also against Vegas, but recorded an assist on Eberle’s goal.

— Ryan Donato was injured in Arizona and was not in the lineup Tuesday. Hakstol did not have an update.

— Gourde did not play the last six minutes of the game, apparently suffering an injury. Hakstol did not disclose what the nature of the injury was nor did he offer any status update. Earlier in the game, Gourde took a shot off the knee but returned to the ice for his next shift.

— The Kraken open a six-game homestand at Climate Pledge Arena Thursday with a game against the Anaheim Ducks.