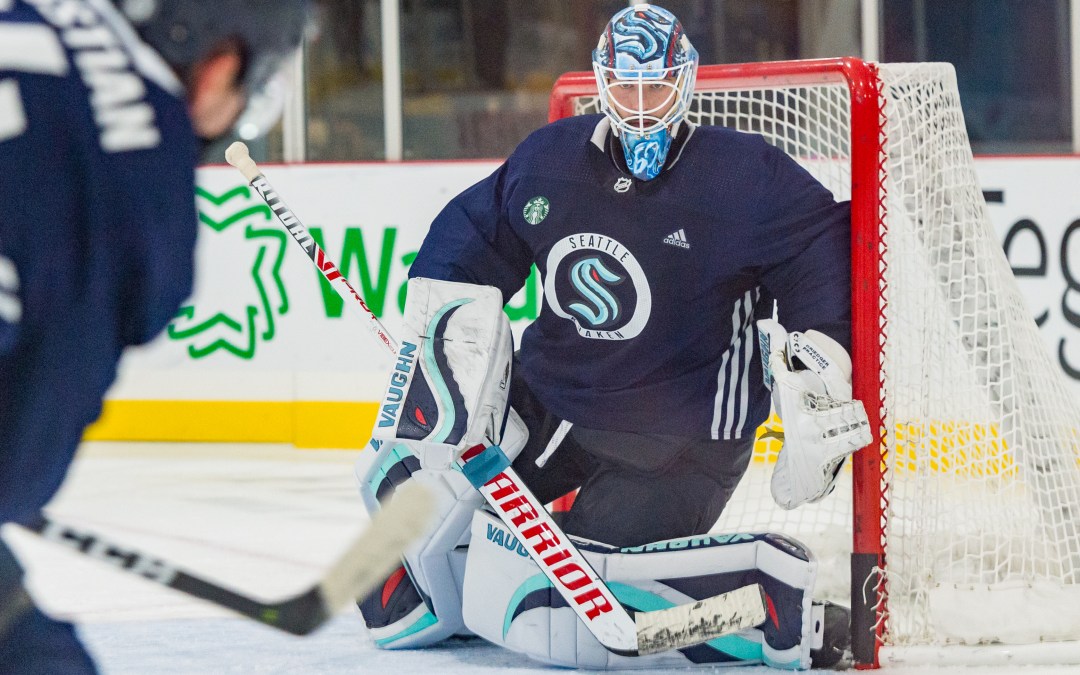 Back to where it all began, the Seattle Kraken are in Vegas on Tuesday to take on the Golden Knights for the second time in their existence and the first time since opening their inaugural season on the Strip. Circumstances are a bit different this time around, as we know a lot more about both teams, but this is still a tough building and a tough opponent, and it is again an important game for Seattle.

The Kraken are coming off a painful loss to the worst team in the league, the previously winless Arizona Coyotes, on Saturday. It was a game in which Seattle scored two goals and chased the opposing netminder in the very first minute of the game. In the second and third periods the Kraken allowed three unanswered goals to give Arizona a lead, then fought back to find the tying goal with 1:18 left. But just seconds later, a bad Adam Larsson turnover in the corner led to the game-winning goal by Lawson Crouse.

It was a night that Seattle fans hope to forget, but it will live on in infamy as the night those same fans completely lost it on Twitter for the first time (seriously, our mentions were… something).

Dave Hakstol acknowledged that it was a difficult game for the team, but hopes they can learn from it. “You gotta grow as a team out of some of the tough experiences,” he said Monday. “And that was a tough experience the other night. It was disappointing for all of us, but it gives you the opportunity also to learn something about yourselves and to be able to grow together.”

Tuesday, the Kraken look to right the ship against a banged up Vegas team.

Out goes Donato, in comes Johansson

Adding injury to insult on Saturday, Ryan Donato went head-first into the endboards on a very awkward play in the first period. He was slow to get up, but did eventually rise and looked ok in the immediate aftermath. He soon went down the tunnel, though, and did not return. Donato did not practice on Monday, but was back wearing a red non-contact jersey at morning skate on Tuesday.

Hakstol confirmed in his press availability after morning skate that Marcus Johansson will return against Vegas, so he will slot into Donato’s spot. Though the Kraken kept saying Johansson was still day to day, it’s not a huge surprise that he’s ready to go. He had been practicing in full, and nobody had been recalled from the AHL to replace Donato in the lineup.

Ironically, Johansson’s only game came at T-Mobile Arena on opening night, after which he somewhat mysteriously popped up on injured reserve and hasn’t played since. He had a big role in preseason and registered 16:13 of ice time with one shot on goal in that first game.

On the previously discussed topic of our Twitter mentions, we hear your goaltending concerns loud and clear. You’re right that Philipp Grubauer has not been at his best so far and statistically has fallen toward the bottom of the league, but there is always context to consider with goalies.

First, Grubauer has been getting very heavily used. Some of that is the decision of the coach—after all, he did give the first five starts of the season to Grubauer—but some of that is simply terrible timing for Driedger to get injured. We all expected more of a 1A/1B platoon scenario, but that just hasn’t worked out. That can still come to fruition, though, and Driedger can start commanding more time with a quality start in Vegas.

Second, goaltending is a mentally taxing position that ebbs and flows during the course of an 82-game season, so give Grubauer time. He will get hot at some point, and you’ll go back to worshipping him as quickly as you might have stopped.

All that said, those that are clamoring for a Driedger start get their wish on Tuesday, as Hakstol confirmed he will go against Vegas. We did not anticipate that it would take until the twelfth game of the season before seeing him officially get the nod from the beginning of a game, but it’s better late than never.

Vegas currently has the following players listed on injured reserve: Mark Stone, Max Pacioretty, Nolan Patrick, Zach Whitecloud, and… Jack Eichel. William Karlsson is also out with a broken foot, though he for some reason is not officially listed on IR, and Alex Tuch and Peyton Krebs were traded in the Eichel deal.

That’s a lot of quality, regular players missing for the Golden Knights, who have been dressing guys like Michael Amadio and Jonas Rondbjerg to fill in. Paul Cotter is also expected to make his NHL debut Tuesday.

The Golden Knights beat Seattle on opening night, then lost four straight before rebounding—despite the injuries stacking up—for five wins in their last seven games. They did lose 5-2 in Detroit on Sunday, but have climbed back to .500 after a horrible start.

It’s an opportunistic team that showed how quickly it can strike the last time these teams played each other. That night, Seattle was playing an aggressive style that left things pretty wide open through the neutral zone. But the Kraken have adjusted their approach dramatically since then, so perhaps the goals won’t come quite as easily for the Golden Knights this time around.

Oh, and speaking of Eichel, holy cats, the Golden Knights traded for Eichel!

The disc replacement surgery that caused his rift with Buffalo has been scheduled for Nov. 12, then if all goes according to plan, the recovery should be about three months. So we won’t actually see him until at least February. When the superstar center does return, the Golden Knights are going to have to make some very tough calls to get themselves under the salary cap… but then they’ll have Eichel.