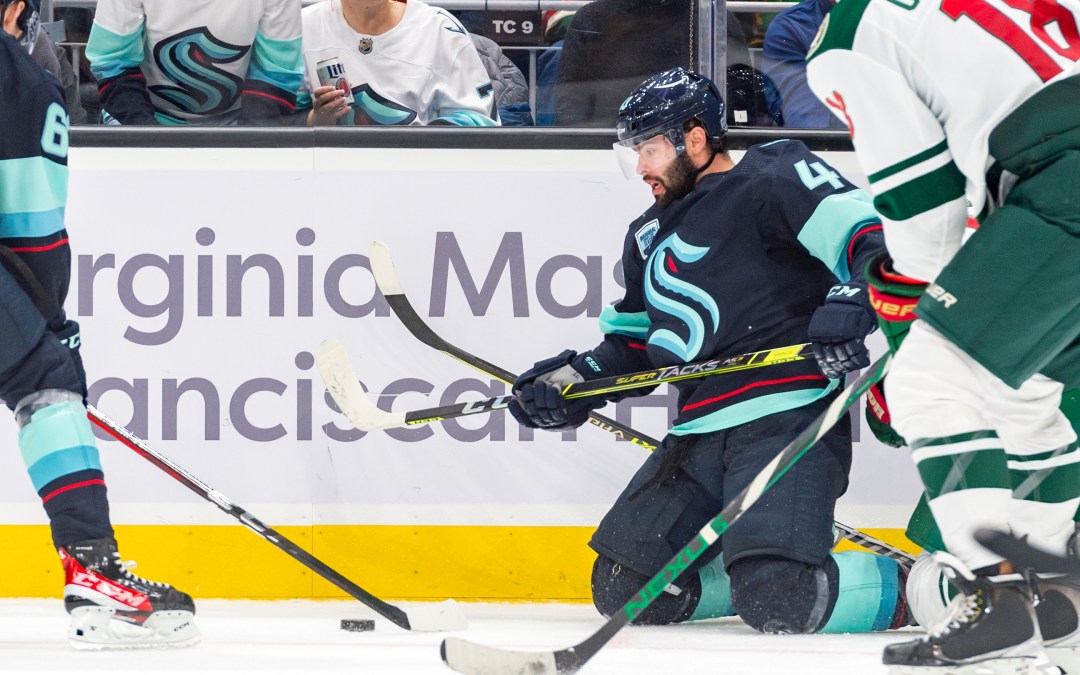 Normally, I try to stay away from speaking in the first person here at soundofhockey.com, but I wanted to start this one with a personal anecdote. As Sound Of Hockey Podcast listeners know all too well, I grew up a Wild fan, and have been following them closely since their inception. Despite my shift in focus toward the Kraken, I still know the Wild roster very well.

At morning skate before Saturday’s game, I saw a diminutive Minnesota player that I did not recognize. When he got close enough, I was able to make out the number 16 on his helmet. A quick Google search reminded me that the Wild had claimed Rem Pitlick off waivers from Nashville during training camp. Hmm. Forgot they had that guy, I thought. Then I sipped from my coffee and went about my day.

Ok, anecdote over, usage of first person over.

The 24-year-old Pitlick had never scored an NHL goal in 15 career games entering Saturday’s matchup against the Seattle Kraken. When his 16th career game ended, he had scored three and almost single-handedly sent the Kraken to their fourth consecutive loss and sixth in seven games.

Things getting ugly for Kraken

Things are getting rough for the Kraken early in their inaugural season. Losing three in a row is a bad stretch, but four in a row, and we’re now using the phrase “losing streak.” There’s no doubt the players are feeling it, and they are fully aware that they’re dropping deeper and deeper into last place in the Pacific Division with every passing game and every missed opportunity.

Giordano, a 16-year veteran in the NHL, has been through times like this in his career. “From my experiences, you find a way to grind one out, get that one win, and then everyone starts feeling better about themselves, and we move forward.”

That did not happen on Saturday, though, and as is becoming too common for this budding franchise, the team found a new way to lose.

Here’s the irony. We would argue the team defense of the Kraken was actually quite good on Saturday. The Wild—even with sustained zone time in the first period—did not get much through to Grubauer when they were set up in the zone. What did get through in those situations was pretty low danger throughout the night, and Seattle ended the game with 62.5 percent of the high danger shot attempts and 55.78 percent of the expected goals for, according to naturalstattrick.com.

If you take the three five-on-five goals away from Minnesota, scored off two breakaways and an awkward odd-man rush, things are looking pretty light in front of Philipp Grubauer. What doomed Seattle was a couple terrible turnovers in some of the worst possible areas.

The first goal came at 12:33 of the first period off a slowly developing and downright awkward rush. Vince Dunn sent a soft shot toward Cam Talbot in the offensive end, but Alex Goligoski cleared it down the ice. The puck trickled deep into Seattle territory and toward the corner to Grubauer’s right.

Carson Soucy had to make the decision to try to win the race with Ryan Hartman or go to the front of the net and try to cut off a pass. He chose the race and lost. Hartman quickly got a pass to the netmouth and found Pitlick crashing, as a backchecking Marcus Johansson had stopped moving his feet. The puck just squeezed through Grubauer and limped over the line for Pitlick’s first career marker.

The second and third goals came in similar fashion to one another and featured the same cast of characters for Minnesota. Both were the direct results of bad second period turnovers in the middle third of the ice.

With Seattle rushing up the ice, Jared McCann, who somehow became the last player back, ran right into Hartman as he tried to make a neutral zone pass in transition. In one motion, Hartman again found Pitlick, sending him in all alone with all the time in the world to get Grubauer moving the wrong way. Pitlick executed to perfection, and he tapped it home at 7:44 of the second frame.

Then 11 minutes later, Giordano made an equally bad turnover at the Wild blue line when he… stop us if you’ve heard this one before… ran right into Hartman, who stripped him of the puck and quickly found Pitlick for a breakaway. Pitlick made the same move as his previous breakaway and buried it in a yawning cage as a smattering of hats from visiting fans hit the ice.

The timing of that third goal was also damning for Seattle. It came at 19:20 of the second, and instead of going to the dressing room trailing by two in a mostly tight-checking game, the Kraken now faced a practically insurmountable deficit against a strong defensive team.

Too little, too late for Kraken against Wild

To Seattle’s credit, it did push back in the third and injected some excitement into the home crowd at Climate Pledge Arena. Johansson got his first goal of the season on the power play at 9:19 to make it 3-1. After a few rounds of “one pass too many” to start the period had those home fans growing restless, Alex Wennberg found Johansson at the top of the crease. Johansson redirected it around the outstretched right pad of Talbot.

Interestingly, the Kraken power play had been in an absolutely dismal stretch and had recently dropped to last place in the NHL. Johansson returned from injured reserve Tuesday against Vegas, and in his first game back created a Jordan Eberle goal while playing the netfront role. Then Saturday, he scored on the power play in that same position. Coach Dave Hakstol said after the game he could sense in practice that the chemistry was starting to come on the power play, so perhaps that’s one area of Seattle’s game that is on the rise.

Seattle continued to push throughout the third, dominating possession and getting plenty of good looks on Talbot. With all the momentum, it felt like the game was on the brink of becoming a one-goal contest.

That’s also why it was perplexing to see Grubauer skating to Seattle’s bench with 5:22 left on the clock. It took all of 16 seconds for Nico Sturm to put the game back out of reach with an empty netter. We are aware that advanced analytics say you should pull the goalie early, especially when trailing by two goals. But when there are more than five minutes left and you have the ice tilted at five-on-five? That’s a head scratcher of a decision, about which we will certainly argue on an upcoming episode of the Sound Of Hockey Podcast.

With the net empty again, Wennberg did score his second goal of the season to bring Seattle back within two, but with under a minute left, it was too little and way too late.

The Kraken now have a couple days off to lick their wounds before welcoming a bad Chicago Blackhawks team to town on Wednesday. After that, they face a murderer’s row of opponents, so if they don’t get it figured out quickly and start playing with confidence, this losing streak could get much worse .