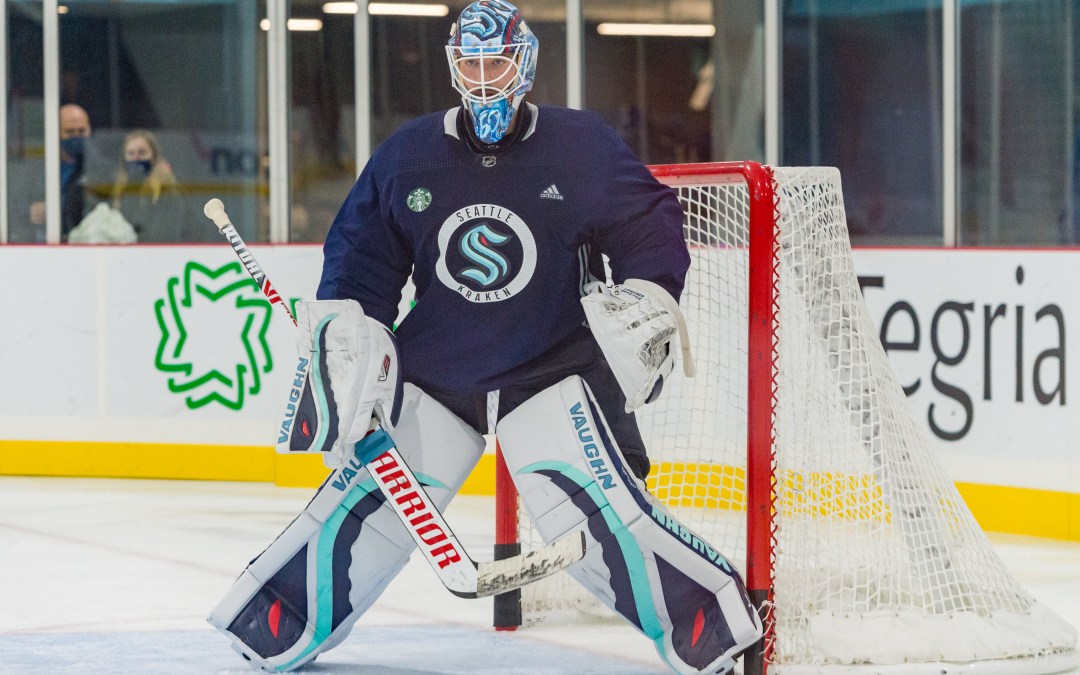 There was a feeling coming into Seattle’s last game against Chicago that it was high time for the Kraken to break out of a compounding losing streak. Beyond that game, a sequence of tough opponents awaited, so a win seemed imperative for creating some good feelings going into this extra challenging stretch. But against the Blackhawks, Seattle lost its fifth straight and seventh in eight games, making us wonder if perhaps the streak was far from over. Things only get harder from here starting with the Colorado Avalanche, who will visit Seattle for the first time on Friday.

Chris Driedger has been given the nod in net for the Kraken, marking his first home start for the team. With his injury earlier in the season and coach Dave Hakstol’s heavy usage of Philipp Grubauer, Driedger has only made two total appearances. His lone start came in Vegas on Nov. 9, a 4-2 loss to the Golden Knights.

While Driedger is way overdue for getting more consistent starts, having his third appearance come against Grubauer’s former team is a tad surprising. Coach Dave Hakstol downplayed the significance, calling it “a good time to get [Driedger] back in net,” and said Grubauer will certainly get a chance against the Avs at some point.

Kraken chasing too many games

A contributing factor to this streak has been the way the Kraken have been starting games. All throughout this season—and especially recently—we’ve seen Seattle chasing games after allowing the first goal. Against the Blackhawks and Wild, they played tight defensive hockey in the opening frame, but produced almost nothing offensively and ultimately conceded the first goal each night.

In those games, the Kraken did eventually start pushing back, but not until they had fallen behind 3-0 in each, and they did not score any goals until late in the third period in either. That just can’t happen if the Kraken want to start winning games.

The players have indicated they are fully aware that starts need to be better, so keep an eye on this Friday to see if there’s more of an offensive push in the early going against the Avalanche.

The Kraken avoid all-world center Nathan MacKinnon, who has been out with a lower-body injury since Nov. 6. That said, plenty of starpower remains available for coach Jared Bednar with the likes of Gabriel Landeskog, Mikko Rantanen, and Cale Makar.

Another player who has had a surprising impact for Colorado is Nazem Kadri, who has 17 points in 13 games. He’s on a seven-game point streak and has notched three points in each of his last two games. In all, 13 of his 17 points have come during this streak, so he’s another guy for Seattle to keep a close eye on.

As a whole, the Avs did not have the dominant start to the season that many expected, but they’ve since righted the ship and have gone 5-1-1 in their last seven, including winning their last three straight. In those three games, they’ve scored 17 goals.

Darcy Kuemper gets the start for Colorado in net. He has been good in his first season backstopping the Avs and is 7-4-0 with a .916 save percentage and 2.56 goals against average.

Yanni Gourde missed morning skate, but Hakstol called it a maintenance day, so he should be good to go. Aside from Driedger, the only other lineup change is Carson Soucy swapping back in for Haydn Fleury, who had a tough game against Chicago.