After loss to Lightning, Kraken need to quickly reset for Panthers 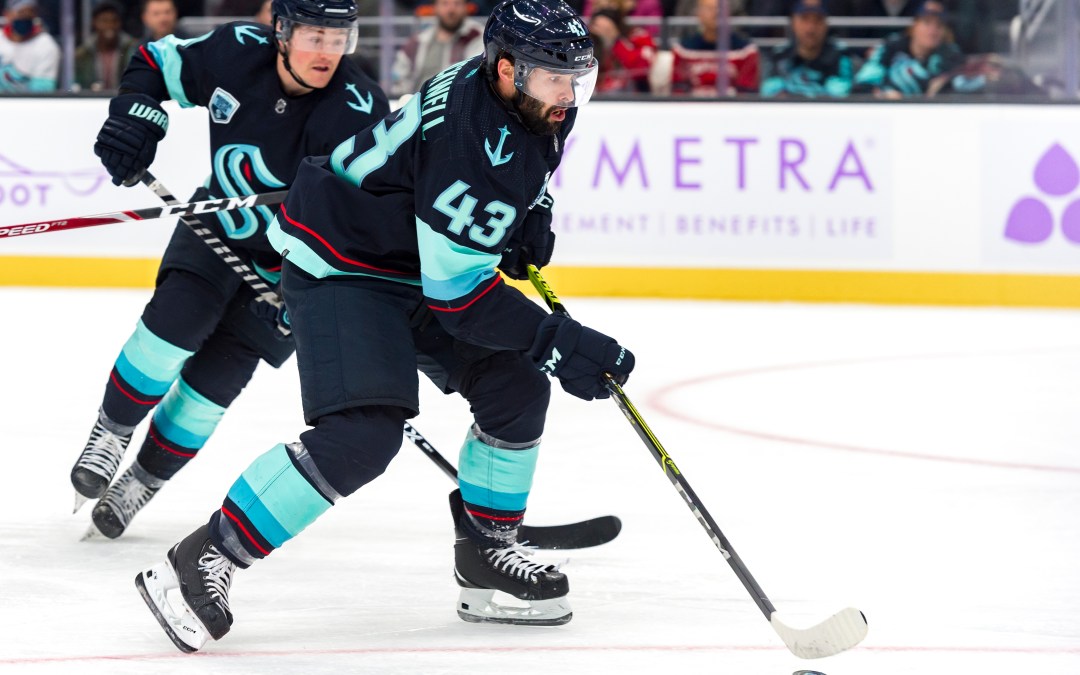 For several weeks, we’ve had circled this pair of back-to-back Kraken road games against the Tampa Bay Lightning and Florida Panthers, expecting it to be an uphill battle. The two contests grew especially daunting when the Kraken were in the midst of a six-game losing streak and were looking ahead at their schedule to see things only getting harder and harder.

One of those two tests is now in the rearview, and unsurprisingly, it proved to be really hard. The other is coming later Saturday afternoon, and with the Panthers boasting an 11-0-0 record at home, well… Let’s just say the second test doesn’t look any easier than the first.

With the rapid succession of games, we’ve decided to go with a bit of a hybrid approach here, a “Three Takeaways” meshed together with a game preview. If you’re confused about how this might work, you’re not alone, but we’re going with it.

Let’s start with our three takeaways from a 3-0 Kraken loss to the Tampa Bay Lightning.

First, let’s address the elephant in the room, which is that captain Mark Giordano was a late scratch Friday due to being placed in the NHL’s COVID protocol. Coach Dave Hakstol said he found out Friday afternoon, so Giordano traveled with the team on Thursday.

“It’s not ideal,” Hakstol added. “But it’s part of our lives right now on all different levels. It’s happened before.”

There have been two separate instances of COVID in the ranks this season, but the team managed to keep those cases isolated. Calle Jarnkrok tested positive prior to the team’s first game, which sparked brief stints in protocol for four other players. But those players were all cleared in time for the opening game in Vegas, and Jarnkrok was the only player who missed time. Jared McCann and assistant coach Paul McFarland were positive a few weeks later, but again, the cases remained isolated to just those two.

Losing Giordano from the lineup just as the team had started to right the ship is damaging for Seattle. Aside from the fact that he leads the team as its captain, he also plays big minutes on the top defensive pairing and often quarterbacks the power play.

It’s hard to say if Seattle’s lack of offensive output on Friday had anything to do with Giordano’s absence, but having such a key piece out of the lineup is never a good thing. Frankly, there was not much push from the Kraken against the Lightning, and the shutout by Andrei Vasilevskiy—his second in a row—looked downright easy.

There were a few chances off rushes, but those were one-and-done scenarios, as the Kraken just couldn’t get set up in the offensive zone for any kind of sustainable pressure.

“We were a half-step behind tonight,” Hakstol said Friday. “Their puck speed got us. We never got them stopped in our zone, and likewise in the offensive zone we didn’t create enough possession.”

For the many difficult losses that the Kraken have racked up this season, they have always managed to find the back of the net at least once, even in the couple games they’ve gotten knocked around. They’ve always pushed back and tilted the ice at some point, but that didn’t really happen Friday.

Takeaway #3: Sometimes you have to just tip your hat

After the Kraken surprised the Capitals and the Hurricanes on Sunday and Wednesday, there was hope that Seattle might find a way to sneak past the Lightning as well.

But there’s a reason the Lightning have won two Stanley Cups in a row, and the way they shut down the neutral zone once they had gotten a lead against the Kraken was clinical. They simply know how to seize control of a game, and they demonstrated this for the umpteenth time on Friday.

Tip your hat and move on.

Riley Sheahan has since been recalled, so expect him to slide in.

With Sheahan back, that leaves just him and Will Borgen as healthy options. So if there are multiple changes (plural), as Hakstol implied there would be, then perhaps Borgen gets a look on Saturday. We shall see.

As more information becomes available, we will update this story.

UPDATE: Sheahan and Borgen are indeed in Saturday. Jeremy Lauzon, who had a tough turnover that led to Tampa Bay’s third goal on Friday, will be scratched for the second time this season. Colin Blackwell is also out for the first time since he returned from injury on Nov. 13. We do not yet know if either of these changes are injury or illness related or are simply coach’s decisions.

Chris Driedger in to face his old team

Chris Driedger was selected and signed by the Kraken from the Florida Panthers at July’s Expansion Draft. Things haven’t panned out the way he would have hoped coming into this season, as he’s only gotten three chances to play. When he has played, things haven’t gone particularly well.

Driedger could really use a quality start Saturday to show to himself and to the team what he’s capable of. He put these Panthers on his back for significant stretches of last season, going 23-14-6 with a 2.07 goals against average and .927 save percentage, and surely a win against his old mates would be a massive confidence boost.

The Panthers are scary good. They had to change coaches after Joel Quenneville was implicated as part of the cover-up in the Chicago Blackhawks’ sexual abuse scandal, and even with that turmoil, they haven’t missed a beat. Now with Andrew Brunette behind the bench in an interim role, Florida has continued its winning ways to the tune of a 14-3-3 record, good for first place in the Atlantic Division, and perfect numbers at home.

Aleksander Barkov drives the bus, but the secret to Florida’s success is a balanced attack that gets production from all parts of the lineup. Jonathan Huberdeau, Anthony Duclair, Carter Verhaeghe, and Aaron Ekblad are all having great seasons offensively, while Sergei Bobrovsky has morphed back into the exceptional goaltender he once was after some early challenges in his Florida tenure.

Did we mention that the Panthers are 11-0-0 at home? That’s tied for the longest home winning streak to start a season in the history of the NHL, so if they beat the Kraken Saturday, they will set a new record. Sheesh!

Working in the Kraken’s favor on Saturday is that Florida is also on the second of back-to-backs after a rare 4-3 loss to the Capitals in Washington on Friday. Bobrovsky played that game, so we will likely see Spencer Knight on Saturday. Knight, the 20-year-old hero of this year’s World Junior Championship, is 5-2-1 with a 3.03 GAA and .903 save percentage.