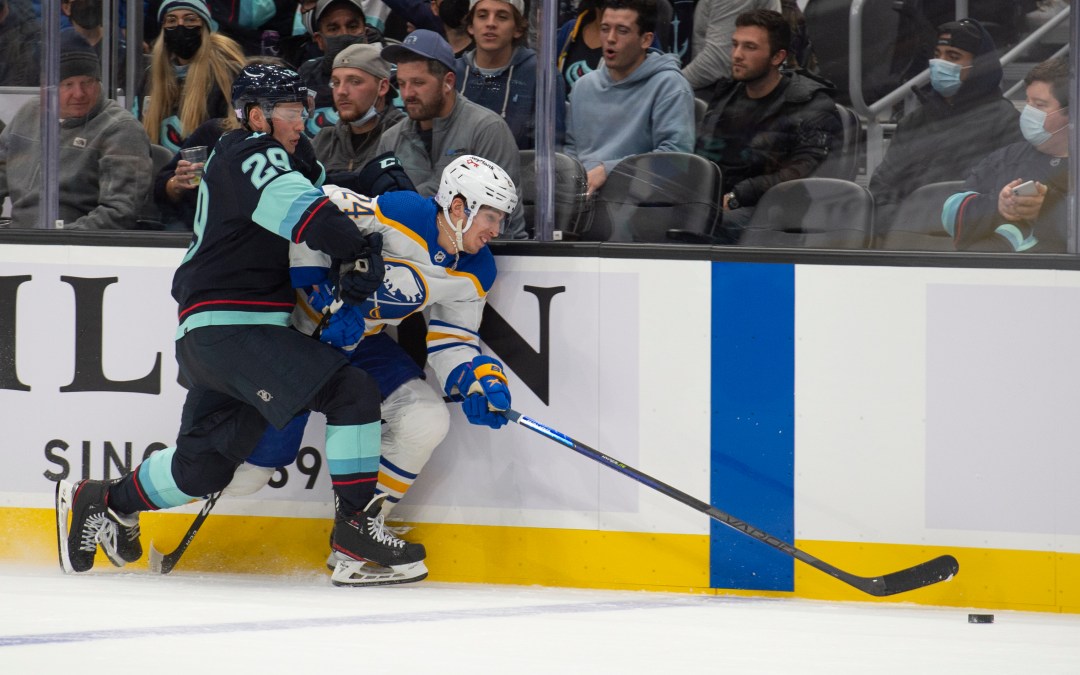 It’s a trap! Right? Well, no, apparently it wasn’t in the end. But in a game that certainly felt like a trap going in, the Kraken came out flying on Monday. They potted three goals in the first period, including two of the short-handed variety, and followed up a surprising win in Florida with a convincing win in Buffalo. The Sabres pushed back in the second and third periods and got some fortunate bounces that resulted in goals, but the version of the Kraken that we’ve been seeing recently was simply too much for Buffalo to handle.

Monday’s game felt like a trap because Seattle was coming off that emotional victory in Florida, against one of the NHL’s best teams, and had recently beaten other good teams, Washington and Carolina. It’s so easy to get a little ahead of yourself and assume victory against a struggling club like Buffalo, but to their credit, there was no letdown by the Kraken who have now won four out of their last five since their six-game losing streak ended.

It’s borderline comical to think back and remember how pessimistic we all were about the outlook of the Kraken after they bottomed out against Colorado with a miserable 7-3 loss on home ice on Nov. 19. At that point, a look ahead in the schedule made it seem as if the streak would extend to double digits before things got even a little better. Now, the Kraken are riding high and have a chance to take six points out of a four-game road trip if they can pull out one more win on Wednesday against the Red Wings.

Here are our three takeaways from a 7-4 Kraken win over the Sabres on Monday.

What a story Will Borgen has been in his first two games after getting scratched for 19 straight to start his tenure with Seattle. Against Florida, he had five shot blocks, a shot on goal, and a fisticuffs-related roughing penalty, all of which helped earn him a spot in the lineup on Monday. Against his former team, the Buffalo Sabres, Borgen again showed why the Kraken have valued him enough to hold onto him, even as they’ve been forced to waive players that had at one time been considered regulars.

Borgen assisted on Mason Appleton’s first goal as a Kraken late in the second period, giving him his first NHL point. But the big moment for Borgen came much earlier and helped set the tone for what type of game the Kraken were there to play.

With the Sabres on the man advantage just six minutes into the game, Yanni Gourde made an outstanding hustle play to steal the puck from Rasmus Dahlin behind the Buffalo net. Gourde then found Carson Soucy, who beat Dustin Tokarski cleanly over the shoulder. There was plenty of time left on the Haydn Fleury penalty, though, and giving back a goal there destroys the early momentum.

Borgen put himself in front of two back-to-back bombs by Tage Thompson, drawing a cheer from the Kraken bench that could be heard on the TV broadcast.

Jamie Oleksiak blocked another shot seconds later, and Chris Driedger, who had his second solid performance in as many tries with 32 saves, swallowed up the last shot of the penalty kill.

From that moment on, you just knew it was going to be a good night for the Kraken.

With Borgen proving he can play, things are going to get even more interesting for the defensive corps, especially when Mark Giordano returns from COVID protocol. Hakstol was already rotating in Fleury and Soucy, two players that can certainly play a regular NHL shift. Now Lauzon, who has been a workhorse for much of the season, has been scratched for two straight games, but that likely will not stick.

It feels like something may have to give at some point, but for now, too many capable defensemen is a good problem to have.

Nights like Monday are fun, because guys get to pad their stats as they all assist on one another’s goals. We saw that with the Brandon Tanev, Morgan Geekie, Jared McCann line, as all three forwards registered two points on the night.

McCann had two goals, including an absolute beauty that Geekie shoveled to him with one hand on his stick.

Tanev demonstrated—in about a seven-second span—why Kraken fans love him so dearly. He picked off a Dahlin pass at the Kraken blue line, then raced, fought, and clawed his way through the neutral zone to gain position on the former top overall draft pick. In the process, he drew a penalty, and with the delayed call coming, got his own rebound and shot it passed Dahlin, who had given up the battle and resorted to playing second goalie behind Tokarski.

It was a great night by this group, both in terms of numbers on the scoresheet and analytics, as they took 56 percent of the shot attempts when they were on the ice together and had 60.43 percent of expected goals for.

Perhaps the lone negative from Monday’s game was that Jordan Eberle, the Kraken leader in goals with 11, was injured in the second period and did not return. We believe it happened around the 4:15 mark of the frame when Eberle took an Alex Wennberg pass and went hard to the net. He got a good whack across the legs from Henri Jokiharju, then got tangled up with Will Butcher, and it looked like his ankle may have turned in a strange way, as his blade dug into the ice. He wasn’t putting much weight on it as he headed to the bench.

Hakstol did not have any real update after the game, but if he misses time, Eberle will join Calle Jarnkrok on the shelf. With Mark Giordano on COVID protocol, things are getting rather thin all of a sudden.

To Seattle’s credit, the group has shown well with the “next man up” mentality, as guys are jumping in and out of the lineup and producing. Colin Blackwell was scratched the last two games. So one would think that if Eberle or Jarnkrok can’t go in Detroit on Wednesday (Jarnkrok hasn’t been on the road trip, so this feels unlikely), then Blackwell would be there to fill the void.

Remember those 40 minutes when Seattle was fully healthy against the Capitals? Those were the days minutes.