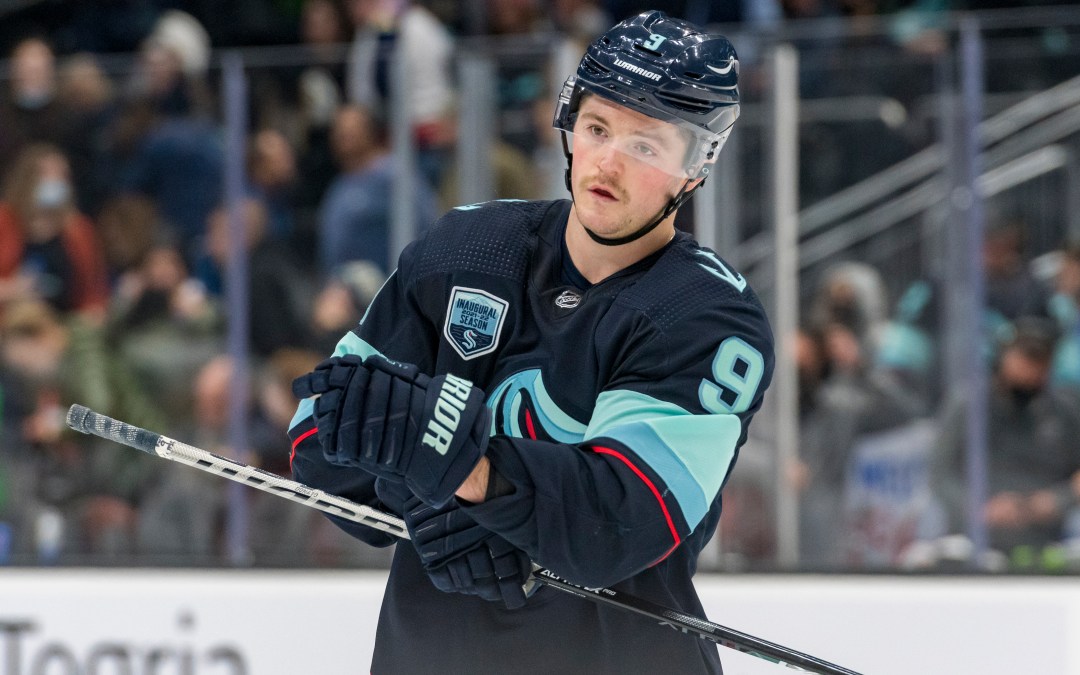 Missing several key players, the Seattle Kraken got a late third period goal from Ryan Donato to earn a point in the standings as they dropped a 4-3 shootout to the Detroit Red Wings and Little Caesars Arena Wednesday.

Thomas Greiss turned away 21 shots for Detroit (11-9-3) and the Red Wings got goals from Robby Fabbri, Vladislav Namestnikov, and Lucas Raymond while Moritz Seider and Dylan Larkin each chipped in with a pair of assists.

The Kraken end their four-game road trip with a 2-1-1 record and earn points in the last three.

“Every point is massive,” Yanni Gourde said. “Every point is very important. So, it is a big point, but we got to be a little bit better, but we battled tonight. We definitely battled and we’ll look at the tape and try to improve.”

Down 3-2 as the third period was winding down, Donato gave the Kraken a chance. He got the puck from Jamie Oleksiak and quickly fired a wrist shot that beat Greiss in the top corner. The goal tied the game and came at 14:16 of the third.

Neither club scored in overtime, and Seattle’s Yanni Gourde got the best look with two quick shots after he dogged the puck away in the Detroit zone. The game went to a shootout where Detroit’s Larkin and Adam Erne converted their chances and Joonas Donskoi scored for the Kraken.

“I like the fact that we got down in the third and continued to push back and found a way to earn a point and get ourselves into overtime,” Seattle coach Dave Hakstol said. “We wanted the extra point tonight, so I think we’re all disappointed about that. But it’s also a valuable point that we gained. We earned the point tonight and we did that throughout the road trip. You know, we just went into each individual game and just worried about the work that we had that night.”

Back and forth final 40 minutes

Neither team scored until the second period, although both had goals waived off in the first. Seattle appeared to score on a Jeremy Lauzon shot from the point, but Mason Appleton was ruled to have made contact with Greiss in the crease. Raymond scored off the rush later, but Hakstol challenged the play and upon review it was called offside.

It was the first coach’s challenge in Kraken history, and it went the right way.

“That’s Tim Ohashi and Brady Morgan in the back room, number one,” Hakstol said of the challenge process. “Those guys did a great job not only of seeing it right away, but getting information and getting the right picture to us when you’re on the bench, and that’s not always easy when you have 20 or 30 seconds to do it. I know that sounds like a lot of time. But ultimately it is not a lot of time, so those guys did a great job on that.”

In the second period the Red Wings would strike on a power play. A mad scramble in front of the net forced Grubauer to make a couple of saves in close, but he couldn’t make them all as Fabbri was able to bang home a puck into the empty net at 4:46 of the second to make it 1-0.

Seattle tied the game at 1-1 at 10:44 of the period when Marcus Johansson found Vince Dunn up high on a Kraken power play. Dunn took a step and fired his second goal of the season.

Donato would then block a shot and limp into the dressing room only to return seconds later to score his fourth of the year at 16:04 to put Seattle up 2-1. On the play, Detroit defenseman Jordan Oesterle lost an edge deep in his own zone. That freed the puck for Donskoi who quickly passed it to Gourde who made a great feed to Donato for the goal.

“Maybe it’s one notch on the stat sheet for a shot block but [Donato] had a hell of a shot block before he scored that goal,” Hakstol said. “Those kinds of things are real important. He’s probably going to need an ice bag or two, but his compete level and his ability to push through and produce at the right time was really good.”

The period ended 2-2 thanks to a goal from Namestnikov, who snapped a shot after his initial look deflected off a skate back to him at 18:18.

In the third, Detroit went ahead 3-2 on a goal by Raymond at 6:30 when he spun and fired in the high slot. It looked like the Kraken would leave without any points in the standings, but they pushed, hit a cross bar, and eventually got the game tied on Donato’s second.

Injuries piling up for Kraken

Already missing Giordano and Jarnkrok, the Kraken revealed Wednesday morning that Eberle, Schwartz, and Borgen would not be available to play. Back up goalie Driedger also was placed on the injured reserve list.

That’s the Kraken’s top defenseman and two-thirds of it’s top forward line. It was an impressive performance by the remaining players.

“We know it’s a part of the game, injuries happen especially at a time when COVID is such a big thing,” Donato said. “Guys are going out all the time. So, we know it’s next guy up and we need to score on our chances and bury our opportunities.”

There was no update after the game on the status of any of Seattle’s injured players so it remains a possibility that the Kraken will have to take on the Edmonton Oilers Friday with a similarly depleted lineup.

“Next guy up, next guy up, let’s go,” Gourde said. “I know we have tremendous depth in this organization so let’s use it. Whoever gets to go over the boards, just got to go do it the right way and work hard. And if you do that you put yourself in good position to win games.”

+ With the injuries, Kole Lind and Joey Daccord were recalled from Charlotte of the American Hockey League. Lind played in his second game with the Kraken and logged 6:02 of ice time.

+ The Kraken continue to score on the power play, ending Wednesday night 1-for-3.

+ Seattle ends the night tied with Vancouver in the standings with 18 points, six behind the Dallas Stars for the final playoff position in the Western Conference with 59 games left on the schedule.