“Next guy up!” Three Takeaways from Kraken shootout loss to Red Wings 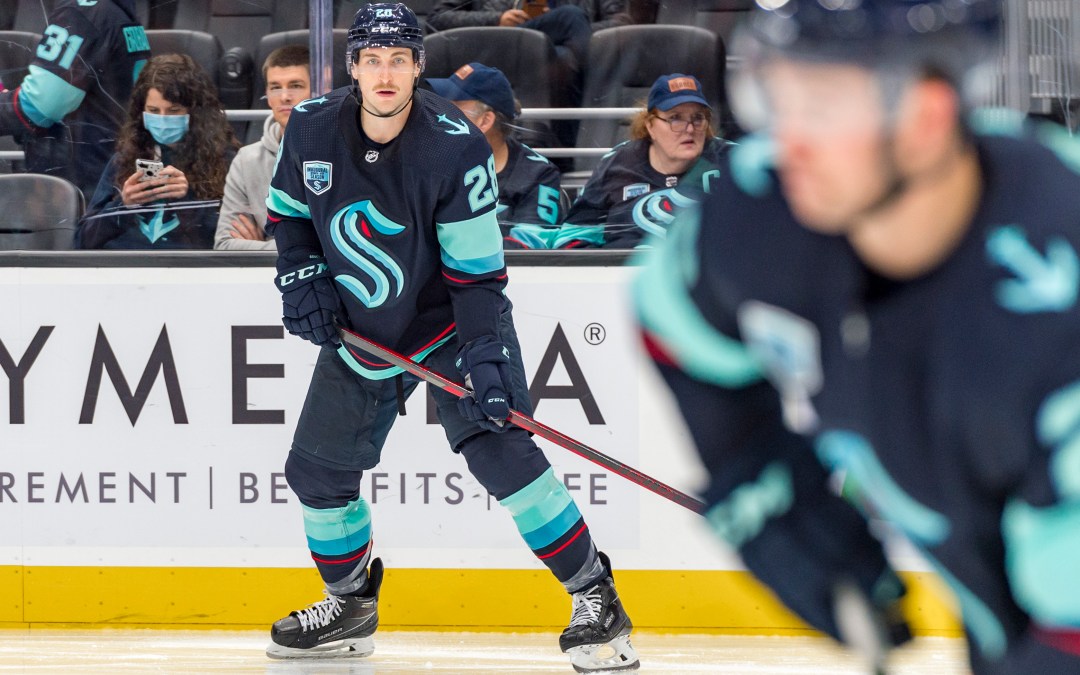 Earlier this season, we heard Seattle Kraken players say—after several of their hard-fought regulation losses—that good teams find ways to get points out of tight games. On Wednesday, the Kraken did do just that, even as they fell behind the Detroit Red Wings in the third period. The outcome was a 4-3 shootout loss but pushing the game to overtime gave Seattle a point in the standings and five of a possible eight from the four-game road trip.

For some reason, five points and a 2-1-1 record feels a lot better than four points and a 2-2-0 record, doesn’t it? A regulation loss in Detroit sends the Kraken home with a very “bleh” sentiment, but figuring out a way to get a point on a night where the injury bug had just struck the team in a big way is another confidence booster.

Here are our three takeaways from Wednesday’s 4-3 Kraken shootout loss to the Detroit Red Wings.

Every time a goalie gives up a goal that maybe shouldn’t have gone in, the broadcasters say something along the lines of, “Oh, he’d like to have that one back.” 17 minutes into the first period Wednesday, 19-year-old phenom Lucas Raymond, off a rush, fired a shot from just above the goal line. Philipp Grubauer was a fraction of a second late in getting back to his post, and the puck caromed off him and went in.

Play-by-play announcer John Forslund indicated that Grubauer would, in fact, like to have that one back.

For as much as you’ve heard that watching hockey over the years, how many times has the goalie then actually gotten it back? It can’t be many, but that happened on Wednesday. Kraken coach Dave Hakstol challenged for offside and won, negating what looked like an unfortunate goal for Grubauer.

Hakstol credited friend of the Sound Of Hockey Podcast and Kraken video coach Tim Ohashi, along with video analyst Brady Morgan, for initiating the challenge. We promised Tim during that podcast interview that we would keep track of this stat for him, so he’s now 1-0 on the season in video challenges.

Coincidentally, the Kraken also had a goal disallowed earlier in the period when Mason Appleton ran into Thomas Greiss just before a Jeremy Lauzon shot from the point. The argument could be made that Appleton was pushed into the Detroit netminder, and even if he hadn’t been, Greiss still had time to recover. But that’s neither here nor there, since the call was made and upheld.

Takeaway #2: Ryan Donato was hurt… and then he wasn’t!

In the second period, Ryan Donato blocked a shot off the top of his left foot and limped down the tunnel in pain. Kraken faithful felt an overwhelming here-we-go-again vibe, as it briefly appeared Donato would join Calle Jarnkrok, Jaden Schwartz, Jordan Eberle, Chris Driedger, Will Borgen, and Mark Giordano in the Kraken’s injury and illness ward.

Not only did Donato get right back out there, but he scored immediately, his first of two goals on the night. The Red Wings had two comical errors in a row in their defensive end, and the puck wound up on Joonas Donskoi’s stick at the right hash. He dished to Yanni Gourde, who then made a beautiful fake and pass to Donato. Donato dusted it off and calmly deposited it into a yawning cage.

That gave Seattle a 2-1 lead, but the Kraken later found themselves trailing after a late second-period goal by Vladislav Namestnikov and a Raymond goal—this one actually counted—6:30 into the third.

With Seattle now behind, Donato, sore foot and all, followed Jamie Oleksiak on a rush into Detroit’s zone. Oleksiak lost the handle on the puck, but it dribbled right to Donato, who wasted no time in firing a perfect shot into the top corner to beat Greiss for the second time.

Takeaway #3: Next guy up, indeed

Injuries happen in hockey. It’s just part of the gig, and every NHL team deals with them every single year. Teams that have the depth to manage through times when several injuries happen at once are the ones that sustain success throughout the season. It’s a one-game sample size of the Kraken having a whole host of players on the shelf simultaneously, but still, that was a gutsy effort by the boys.

Eberle and Schwartz are the top two point producers for the Kraken so far this season, while Giordano is the captain, a top-pair defenseman, and a power play quarterback. Having those players all out at once is certainly less than ideal, but the Kraken rose to the occasion Wednesday.

As Gourde said after the game, “Next guy up, next guy up, let’s go!” Indeed, Yanni. Indeed.

While it’s great to see guys like Donato step up and help the team find points, Seattle needs its biggest guns healthy. Here’s hoping they’ll get some reinforcements before Connor McDavid, Leon Draisaitl, and the high-octane Edmonton Oilers roll into town on Friday.