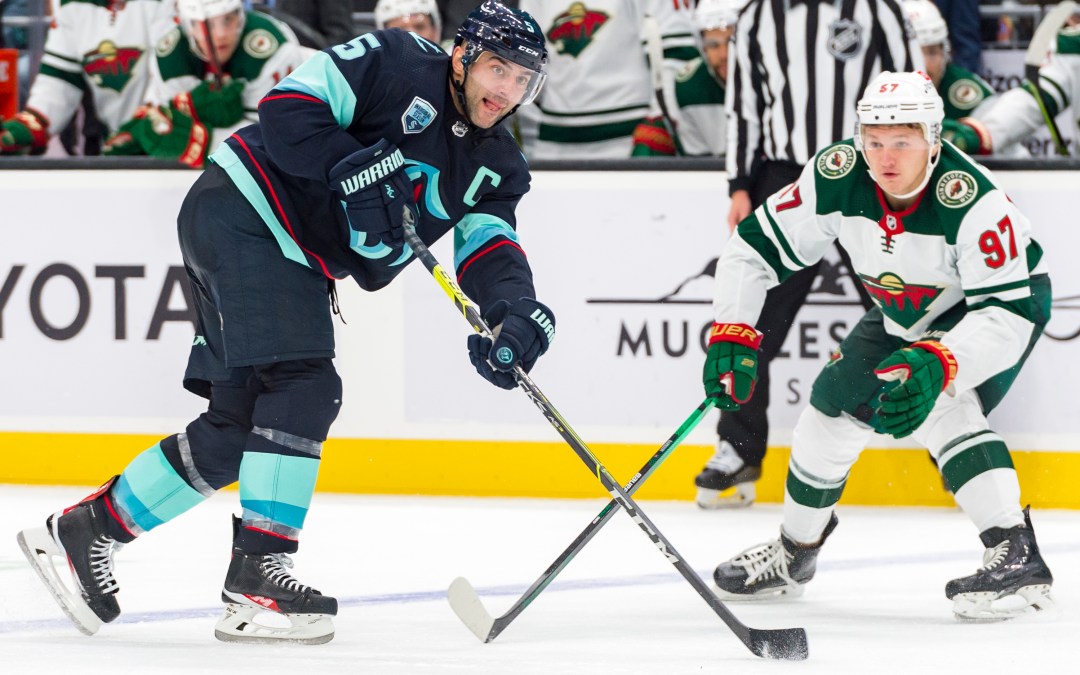 SEATTLE – Less than 24 hours after a disappointing 6-1 loss to the Pittsburgh Penguins, the Seattle Kraken were back at practice at the Kraken Community Iceplex Tuesday morning.

The biggest surprise was seeing captain Mark Giordano back with the team and skating. Giordano tested positive for COVID-19 the morning before Seattle took on the Tampa Bay Lightning on Nov. 26. He’d been quarantining in a Tampa hotel by himself before clearing protocol and flying back to Seattle on Monday.

“It’s tough to sit in a room by yourself for 10 days but I just listened to the docs and our staff here,” Giordano said Tuesday. “I talked to them daily and then go from there but just try to have some time to myself. I reflected on a few things I guess over the 10 days but thank God for iPads and phones and being able to FaceTime family and stuff like that.”

Giordano says that he didn’t have many symptoms other than a touch of congestion, but he did lose his sense of smell and taste.

His taste has slowly come back to him.

“It was actually yesterday, I landed in the afternoon, and I had some chicken and some pasta at home and it caught me off guard that I could taste it,” Giordano said. “It’s a weird feeling of being hungry and not being able to taste your food. I don’t wish that on anyone for sure.”

Giordano was a full participant in practice Tuesday but wasn’t sure yet if he’ll play Thursday when the Kraken host the Winnipeg Jets at Climate Pledge Arena.

“It was a perfect practice for me to be honest, to get back in and get my lungs and my legs where they need to be,” Giordano said. “Just looking forward to now feeling better tomorrow and then looking forward to Thursday… I haven’t talked to the coaches or training staff yet about [playing Thursday] at all. But yeah, anytime, as a player, you want to get back in there as soon as you can and play.”

Kraken up the battle level at practice

Practice on Tuesday was not for the faint of heart. The Kraken worked hard with several physical puck battle drills. There was hitting as guys battled one-on-one in the corners and later in two-on-two competition.

“There was no message there,” Kraken coach Dave Hakstol said. “We just take a lot of pride in our level of compete and we got a little bit away from it last night in our home building. We just went out and had a good hard work and practice today.”

While Hakstol says it was just a hard practice, which it was, the team hasn’t had a practice as physical since early in training camp. It came a night after the team started slow and gave up three goals in the first five minutes.

It was a departure from the tight, structured way the team had played during it’s 5-1-1 streak coming into Monday’s game.

“I wasn’t looking at a message today,” Hakstol said. “Today we went out and worked and that’s what we do. Like I said, we feel like we got away from that a little bit last night. We got back to it today. There’s nothing more, nothing less to the practice today. It was a good hard work and practice with guys competing hard.”

Chris Driedger was a full participant Monday, sharing reps in net with Joey Daccord. He’s still on injured reserve but looked like he was moving without any discomfort.

The team didn’t get into any line rushes Tuesday and Hakstol hinted that there may not be a lot of change coming to his lineup. “That’s not the first place that I’ll look coming out of last night,” Hakstol said. “That’s one thing as we get to Thursday, some of those things could change, but that’s not going to be the first area that I look to. Won’t be close to the top of the list.”