With Giordano returning, can Kraken get back on track against Jets? 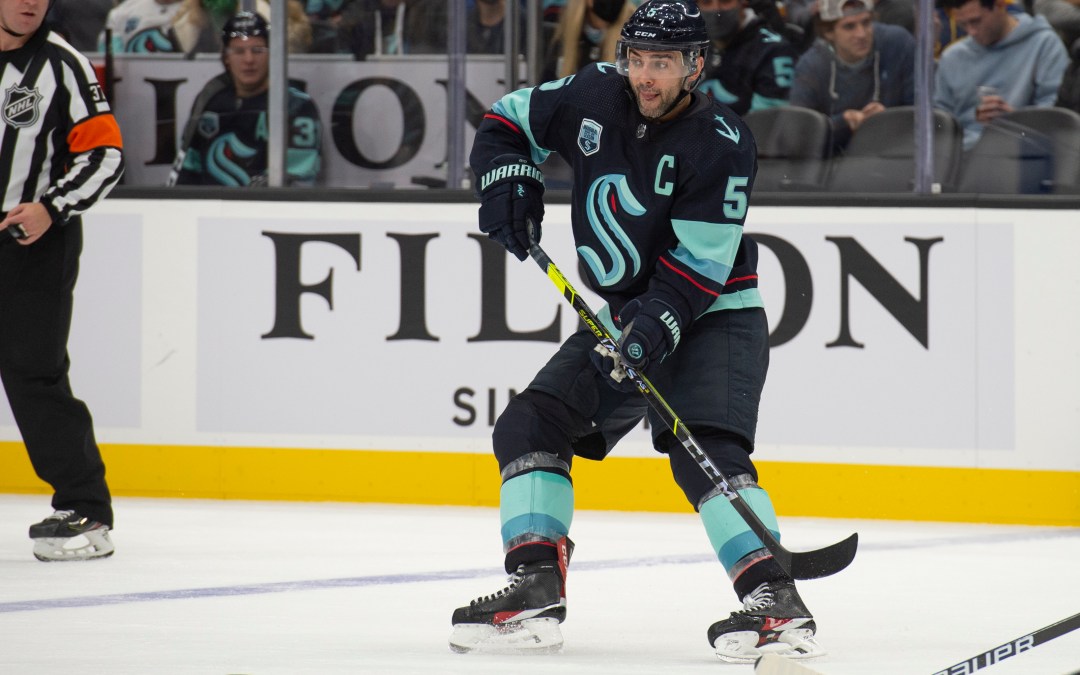 Things spiraled out of control quickly for the Kraken on Monday against the Penguins. Five minutes into the game, Philipp Grubauer had been pulled, and Seattle trailed 3-0. It goes without saying that the Kraken will collectively look for a better start against the Winnipeg Jets on Thursday, as they hope to get back in the win column after such a successful streak of play evaporated with that ugly 6-1 loss.

Monday’s game represented the second time this season that Grubauer has been pulled from a game, with the first coming against the Philadelphia Flyers back on Oct. 18. In his next game after the first early hook, Seattle’s home opener against the Canucks, Grubauer was ok but gave up three goals on 25 shots, including the game winner right between the wickets.

He had been on a pretty good run before the Pittsburgh game, with his season stats quickly improving, but that game on Monday was a definite step in the wrong direction. Some goalies are excellent at bouncing back after a game like Monday’s, and some stay rattled for a while. Let’s see how Grubauer responds Thursday for the Kraken against the Jets.

News broke Wednesday that Colin Blackwell had entered COVID protocol. The revelation from coach Dave Hakstol came just one day after captain Mark Giordano returned to the ice for the first time since testing positive for the virus on Nov. 26.

Giordano’s positive test came after he had traveled with the team to Tampa for its game against the Lightning, so he was forced to stay there and quarantine in a hotel. He said on Tuesday that he did not get terribly sick but had some congestion and lost his sense of taste. His minimal symptoms were in contrast to teammate Jared McCann, who shared after his own stint on the COVID list at the beginning of November that he had been hit hard and needed time to build his stamina back up.

Hopefully this means that Giordano will be able to hit the ground running, as he is expected to return to the lineup on Thursday.

Calle Jarnkrok has also been out with injury since Seattle’s game against the Carolina Hurricanes on Nov. 24. He’s been removed from injured reserve, according to the NHL Media website, but Hakstol would not confirm if he would be in the lineup Thursday. Call it a hunch, but we think Jarnkrok will be in for the Kraken against the Jets.

Blackwell, by the way, scored a beautiful goal against the Edmonton Oilers on Friday but only got 7:28 of ice time and was scratched against Pittsburgh.

It’s been a strange season so far for the Winnipeg Jets, who have had some serious ups and downs en route to their current position in fifth place in the Central Division.

Off the ice, their general manager, Kevin Cheveldayoff, was wrapped up in the Chicago Blackhawks’ sexual abuse cover-up scandal but was ultimately let off the hook.

On the ice, Winnipeg took standings points in 13 out of 14 games between Oct. 19 and Nov. 18 but then lost five of their next six in a dismal stretch of hockey where they struggled to score goals. They’ve since (sort of) gotten things back on the rails and got a big win over the Toronto Maple Leafs on Sunday but followed that up with a 4-2 home loss to the Hurricanes on Tuesday.

The old guard of Blake Wheeler and Mark Scheifele remains present and accounted for, though Wheeler has not yet scored a goal this season. He does have 13 assists in 20 games played, while Scheifele has six goals and nine assists in 19 games. Kyle Connor and Nikolaj Ehlers have been excellent for the Jets, though, and have racked up 27 and 17 points respectively.

Also contributing regularly is Pierre-Luc Dubois, who was the central figure in the chaos of the Columbus Blue Jackets last season. After butting heads and being benched by John Tortorella, he requested and was eventually granted a trade to the Jets, who sent Patrik Laine and Jack Roslovic the other way. PLD had a tough start to his tenure in Manitoba, but has shown well in the opening stages of this season, notching 13 goals and 10 assists in 25 games. He will be a key component of this group for many years to come.