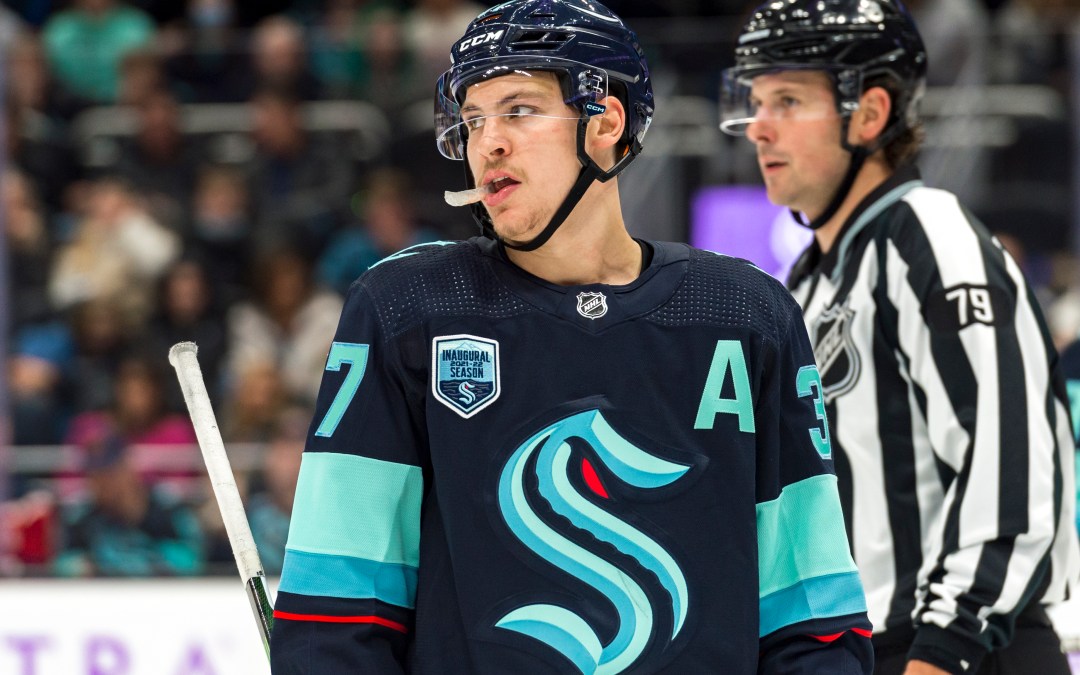 Emails that start with the phrase, “Out of an abundance of caution,” typically bring bad news. The Kraken sent one of those messages around 9AM on Saturday, indicating that media availability would be held via Zoom for both morning skate and for post-game following the team’s matchup with the Columbus Blue Jackets.

The last time availability was held remotely was when the team was prepping to head to Vegas for its first game ever and five players had been placed in COVID protocol. So we figured some sort of COVID-related news was coming, even before morning skate on Saturday.

Thankfully, the news wasn’t quite as dramatic this time around, though Yanni Gourde—a key piece of this Seattle team—plus Riley Sheahan and assistant coach Jay Leach have joined Colin Blackwell in protocol. Former Seattle Thunderbird Alexander True was recalled from the AHL’s Charlotte Checkers and is expected to be in the lineup against the Blue Jackets for his Kraken debut.

Ironically, it was True who got recalled the first time Seattle went through this in October. He even did a press conference prior to the game against the Golden Knights, in which he talked about how excited he was to be playing. But then four of the five players in protocol were miraculously cleared in time for that game, and True ended up getting scratched. It seems unlikely that a late clearance from protocol will happen this time.

Our spidey senses were also tingling over the fact that Joey Daccord was not at morning skate on Saturday. Unlike the players that had entered COVID protocol, Daccord’s name remained on the official Kraken roster on the NHL Media website, while Chris Driedger was still noted as being on injured reserve. Still, there was clearly something happening on the goalie front as well.

Sure enough, coach Dave Hakstol later confirmed that Driedger has been activated and will serve as backup to Philipp Grubauer on Saturday, while Daccord is heading back to Charlotte.

Driedger had just started to show his abilities with back-to-back wins over Florida and Buffalo before landing on IR, so his return to the goalcrease in the near future will be a welcome one.

Can Kraken keep from falling into another rut?

The last two Kraken games have been cause for concern about what might happen over the next couple weeks for this team. Typically so resilient, Seattle didn’t show much pushback against either the Pittsburgh Penguins in a 6-1 drubbing on Monday or the Winnipeg Jets in a 3-0 loss on Thursday.

Sure, there were stretches in both games when Seattle had the better of the play, but without the opportunistic scoring we were seeing during the team’s recent 5-1-1 surge, you never had the feeling in either of those contests that the Kraken were going to come out on top.

According to Alex Wennberg, the sentiment amongst the team remains positive despite the last two disappointing performances.

“The vibe is good,” he said Saturday. “Obviously sometimes you play those games where we really aren’t happy with the result or the way we’re playing. I mean, this league, it’s— obviously you look at the game and see what you can do better, but there’s a new game coming up, there’s a new opponent.”

So, can the Kraken close out this homestand with a victory over the Blue Jackets and get back to surging, or will they go back into a losing streak?

The Blue Jackets are a beatable team for the Kraken, but earning a win will mean getting back to the defensive structure and timely scoring that they had been displaying for a bit. When these teams played each other back in October in Columbus, Grubauer had an outstanding game but didn’t get the offensive support he deserved. As a result, the Kraken fell 2-1 to the Blue Jackets that night in overtime.

That familiarity with opponents is still a luxury the Kraken haven’t gotten too many times. “It’s nice to have some firsthand knowledge of how a team plays and how their personnel are being used,” said Hakstol. “Columbus has been a very consistent team right from day one. They forecheck very well, they skate very well, and when you look at how active their D corps can be, they can create a lot in the offensive zone with some of their motion.”

Though the game Columbus brings is consistent, the CBJ’s have had a bad run of results lately, earning just one win in their last seven games. They lost their last game 2-1 in a shootout at home against the Ducks on Thursday and dropped all four games on their last road trip, which started this skid.

When the Kraken lost to the Blue Jackets in October, it was Patrik Laine who scored the game winner in overtime. The enigmatic sharpshooter is now on injured reserve, though, and will miss Saturday’s game.

Elvis Merzlikins is expected to start in goal for the Blue Jackets. He’s had a few tough outings of late but performed well against Anaheim on Thursday, stopping 25 of 26 shots, and on the season has a 2.80 goals against average and .917 save percentage.

Gavin Bayreuther, selected from Columbus in Seattle’s July Expansion Draft, will be in the lineup for Columbus in place of injured defenseman Adam Boqvist. Bayreuther was chosen by the Kraken but did not sign and instead opted to return to the Blue Jackets.