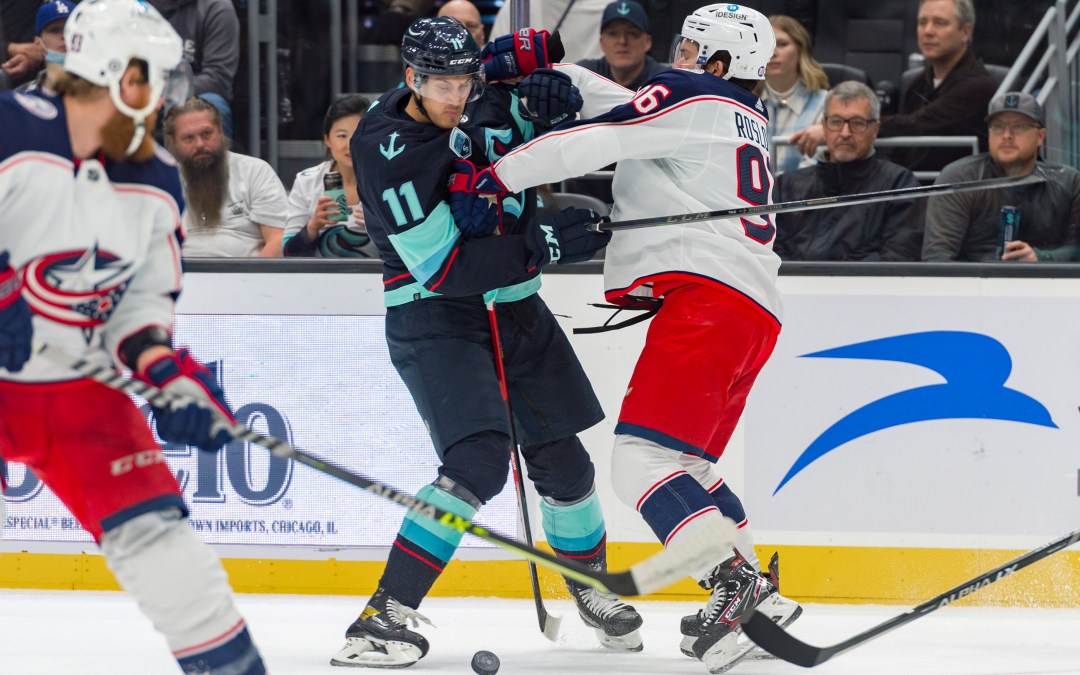 Sports arenas are often loud, but rarely do attendees feel the need to check if their ears are bleeding from the din of the crowd. Soon after the Kraken tied Saturday’s game against the Columbus Blue Jackets, Climate Pledge Arena hit a decibel level that we don’t believe had previously been achieved. Of course there have been some loud moments—the closing seconds of the win over Edmonton and Vince Dunn scoring the first-ever home Kraken goal come to mind—but this was otherworldly.

On Saturday, soon after Dunn buried Seattle’s third goal of the final period to erase a three-goal deficit, the game operations department dug into its little bag of tricks. Text appeared on the video boards, with the beginning of the Top Gun theme playing underneath. The board read, “There comes a time when winning and losing comes down to the fans. That time is now.”

Then, just as the electric guitar riff kicked into its chorus, a new message appeared, “Kraken Nation, just how loud can you get?” The crowd accepted the challenge and rose to a deafening volume.

That was not the first time the Top Gun bit had been used to stir the crowd, but it hadn’t had that kind of impact on its previous deployments.

Perhaps the reaction was an indication of pent-up energy after two dull home losses in a row. Or perhaps it was an indication that Kraken fans—despite the team’s struggles at times—are completely enamored by their home NHL franchise and wanted to show that affection yet again.

Here are our three takeaways from Saturday’s thrilling 5-4 overtime Kraken loss to the Columbus Blue Jackets.

Takeaway #1: Wheels came off the wagon in the second period

The second period has been a period of strength for the Kraken for most of the season. If they’re trailing after the first (pretty standard) or tied but struggling to find traction, they typically tilt the ice in their favor when the second frame begins.

After a good first period in which they dominated possession in the early going but failed to score, Seattle did also get a decent start to the second period on Saturday. But then two consecutive Columbus power plays—one off a questionable call on Alex True for poking at Elvis Merzlikins and getting physically abused for doing so—got things going for the Blue Jackets.

The Kraken actually killed both penalties in impressive fashion, but Seattle playing down a man for four minutes gave the Blue Jackets momentum.

Oliver Bjorkstrand broke through first with a snipe past Philipp Grubauer, and then it was like the floodgates were open for Columbus.

When the dust settled on the second period, the Kraken trailed 4-1 after Jack Roslovic scored second for the Blue Jackets and Max Domi then got two in a row.

It appeared that the game was over as the teams headed to the dressing room.

Takeaway #2: Wheels went back on the wagon in the third period

…But then, the game wasn’t over!

You gotta hand it to the boys. As a team, they have their deficiencies, but they are a resilient bunch. After a miserable power play outing against the Jets on Thursday, they got their first and only man advantage of the game Saturday at 2:28 of the third period when Gabriel Carlsson held Alex Wennberg. After failing to register a shot in four power play attempts against Winnipeg, they quickly converted in just one attempt against Columbus.

“That was the spark that we needed in the third period, and the group talked about it earlier [Saturday] in their power play meeting,” coach Dave Hakstol said. “We’d been on a good run for probably close to a month where we’d been on top of it and really efficient. The last couple games we haven’t been at our level, you know, a level that we expect out of ourselves. The guys took it upon themselves to make sure they were ready to impact the game tonight, and that was a great way for them to do it.”

The funny thing about the power-play goal was that Joonas Donskoi—who still has not scored a goal all season—took the shot and appeared to believe he would get credit. He even went through the fly-by line at the bench first, a spot typically reserved for the goal scorer. But replay showed the puck had glanced off of Jaden Schwartz’s pants. Poor Donskoi. He’ll score one day.

Regardless of who scored it, it was a big goal that got the ball rolling for the Kraken.

Just 22 seconds later, the Kraken brought themselves within one when Brandon Tanev found a streaking Morgan Geekie through a seam. Geekie picked his spot on Merzlikins and fired, and suddenly Seattle was right back in the game with 16 minutes left.

Things went back and forth for the next 11 minutes, but you could feel the tying goal coming. The building came alive in the third period in a way that we didn’t hear in the previous two games, and when Vince Dunn scored at 15:54, Climate Pledge Arena erupted.

After such a demoralizing second period, the third created some moments that will live on in our minds for quite a while. What a comeback by the boys.

Three games have gone beyond regulation time for Seattle so far. One ended in a Kraken shootout loss to the Detroit Red Wings, and now the other two have been overtime losses to the Columbus Blue Jackets.

Three-on-three is not something the Kraken practice very often, and as we saw when it was first instituted in the NHL, it can take some time for teams to get really good at it. So it’s not surprising to see Seattle coming up short in these situations. Still, it’s disappointing to have such an incredible comeback end in bittersweet fashion.

Interestingly, it was former Tri-City American Jake Bean who got the game winner this time. Many expected Bean to be Seattle’s pick in the Expansion Draft from the Carolina Hurricanes, but general manager Ron Francis passed on Bean. He instead selected Geekie, who coincidentally also scored Saturday and also played in the WHL for the Tri-City Americans.

Soon after the Kraken Expansion Draft, the Hurricanes traded Bean to the Blue Jackets for a second-round draft pick, and Bean then signed a three-year deal with Columbus.

After the game, Bean was asked about not getting selected by Seattle. “To be honest, it was a pretty tough day for me and my family when I didn’t get taken,” he said. “But once I got to Columbus, it’s been all Columbus, and I haven’t really thought about it since.”

Fascinating. We’re happy for Bean but also disappointed that he found the game winner Saturday.

On the goal, Marcus Johansson was tracking Domi down into the corner. He seemed to forget where he was on the ice for a moment, and backed himself right into Grubauer’s line of sight. Bean used the unnecessary screen to his advantage and fired a missile inside the far post. That was all she wrote for the Kraken after a memorable comeback against the Blue Jackets.