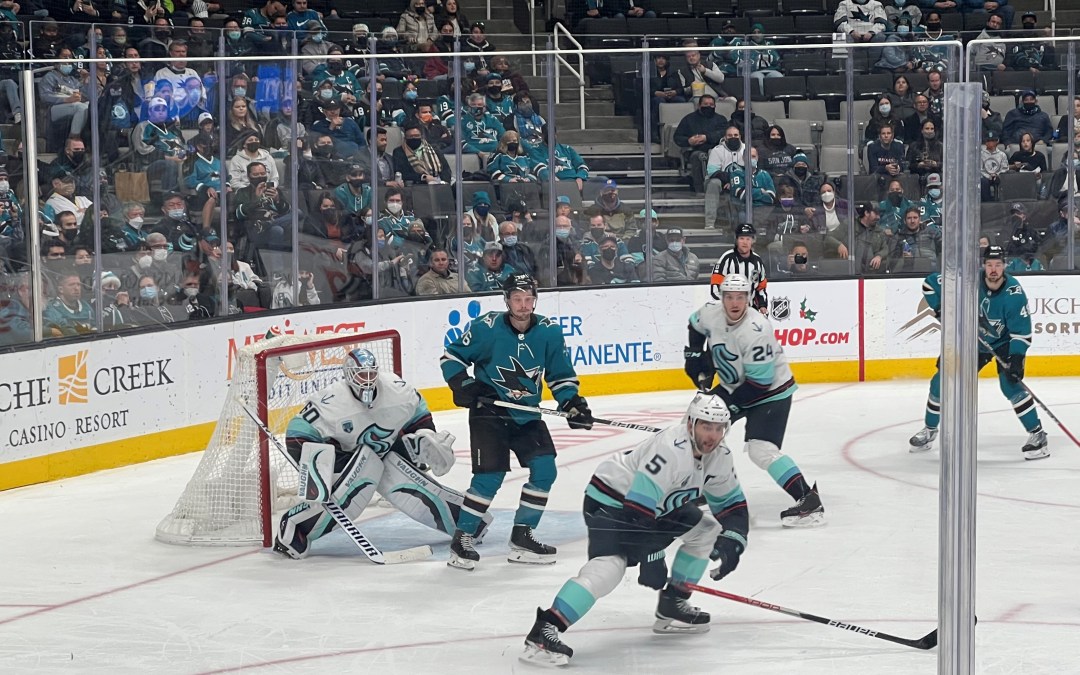 The Kraken were in San Jose Tuesday night for the first time, and it turned out they had just the right-sized boat, defeating the Sharks 3-1.

Chris Driedger was the star, turning away 33 San Jose shots for Seattle (10-15-3) and nearly earning the first shutout in Kraken history. Ryan Donato and Brandon Tanev scored goals while Calle Jarnkrok finished with an empty-net score in the win.

The win snapped a three-game losing streak for the Kraken.

Not to be outdone, Sharks goalie James Reimer matched Driedger through the first two periods before allowing a pair of scores in the third period. He made 27 saves for San Jose (15-13-1).

It was the Kraken’s second win against a Pacific Division opponent, and they improve their record to 2-5-0 within the division.

“I thought the consistency of our game tonight was excellent,” Kraken coach Dave Hakstol said. “We started from the drop of the puck and we played a really solid 60-minute hockey game.”

How it played out in San Jose

Seattle scored first, at 6:23 of the third period when Donato deflected a puck that hit off a Sharks skate and past Reimer for his sixth of the season. It came at the end of a good shift from the ‘Shark’ line made up of former Sharks players Donato, Joonas Donskoi, and Alex True.

“it’s nice to do it against an old team and that kind of stuff,” Donato said. “But, sometimes they go out just as easily where you feel like you’re that close and it’ll find a way to stay out. So, I think it was a blessing that somehow it bounced off a couple of things and went in the net, and I’m happy.”

With a slim lead the Kraken didn’t sit back and let the Sharks come to them.

The shots were 14-12 for San Jose in the third, but Seattle matched with 10 scoring chances, four of which were of the high danger variety.

“We have been doing this sitting back for a couple of games and it doesn’t work,” Adam Larsson said. “There’s players in this league that are too good. You’ve got to go after them, you’ve got to push. We did that today and it was effective.”

Tanev would give the Kraken insurance at 14:18 of the third with a goal to make it 2-0. The play was set up by Morgan Geekie who drove the puck deep, drew in San Jose defenders, and flung a backhand pass to Tanev who was left alone in the slot. The goal was Tanev’s ninth of the season.

With their net empty San Jose would cut the lead to 2-1 with a 6-on-5 goal at 17:53 when a rebound landed on Logan Couture’s stick with an empty net to shoot at.

The Kraken would respond, however, as Alex Wennberg brought the puck up the ice and found Mason Appleton, who got it to Jarnkrok. Jarnkrok scored in the empty net at 19:54 to make the score 3-1 and end any doubt.

Driedger led the way for the Kraken

Driedger was making his fifth start of the season and first start since coming off the injured reserve list Saturday. The second period was his best with 12 saves, including two on a Sharks power play.

He didn’t do it by himself. First it was Jamie Oleksiak who cleared a loose puck off the goal line. Then moments later, Matt Nieto looked like he was going to score an easy goal but Driedger dove back and slowed it down with his stick for Adam Larsson to stop it cold on the goal line and allow for a cover.

“That’s the save of the year,” Driedger said.

“I just felt confident, and I thought we just locked it down,” Driedger added. “I can’t recall any real odd man rushes… I thought we just locked it down really, really well. We only had one penalty kill so it was just an all-around great team effort, and nights like that are going to be nights where it’s gonna be a little easier to stop the puck.”

Driedger did have one moment of trepidation late in the game with Seattle up 2-1.

The San Jose net was empty and Driedger had the puck on his stick with a chance to clear, or even possibly score. His shot, whether it was a clear or a shot, was batted down by Tomas Hertl and nearly put back in the net for the equalizing score if not for one of Driedger’s hustling back and sprawling to keep it out.

“I think I was missing by about 10 yards,” he said with a chuckle. “So I was just trying to clear the puck, and I thought I got quite a bit under it, and I don’t know who it was that knocked it down there. But looking back maybe a little bit too dangerous of a play by me. I mean, maybe a rim would have sufficed in that situation, but I got it and I just ripped it up quick and thought I had it over top of those guys.”

The Kraken will try to make it two in a row against the Pacific Division when they head down the coast to play the Anaheim Ducks on Wednesday.

+ Alexander True was playing against his former team, but he was also playing against a former Seattle teammate. San Jose winger Lane Pederson played with True for the 2014-15 Seattle Thunderbirds.

+ Prior to the game Tuesday, the Kraken recalled Max McCormick from Charlotte of the American Hockey League. McCormick was a scratch on Tuesday.