With COVID raging in NHL, it appears show will go on for Kraken and Sharks 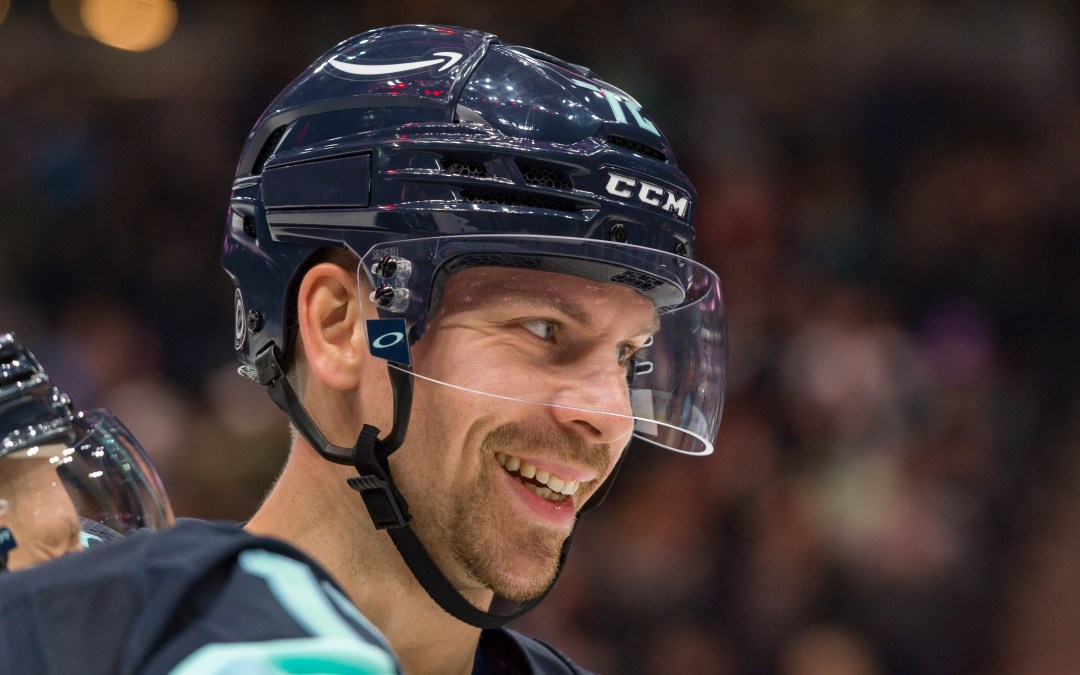 Things have gone haywire around the NHL these past couple days, as dozens of players across the league have landed in COVID protocol and several games have been postponed. The Kraken locker room has been infiltrated by the virus on four separate occasions this season, but so far (we’re knocking on wood and will not accept responsibility for jinxing the Kraken if more positive cases and/or postponements roll in soon) the team has done well to avoid any major outbreaks.

As the Kraken prep to take on the Sharks Tuesday, Yanni Gourde, Riley Sheahan, and Colin Blackwell remain in protocol, as does assistant coach Jay Leach. We were concerned that those cases could lead to more, but that has not proven to be true as of yet. We also wondered if the Kraken—with all of this going on—might consider bringing up an extra forward, being that their forward corps was suddenly depleted. They answered that question by recalling Max McCormick from the AHL’s Charlotte Checkers for his second stint with the Kraken, though we don’t expect him to play against the Sharks.

Having anybody in COVID protocol is less than ideal, but at least the Kraken will have a lineup of (mostly) NHL players ready to go for Tuesday’s game against the Sharks, and that’s better than the situations for a lot of teams currently.

“It’s scary,” Ryan Donato said of the COVID situation. “It is, but at the end of the day, we’ve been dealing with it for so long now that I think guys are used to it. It’s tough, when it happens to you, it’s obviously a little different. When you have friends and teammates that get it, it’s a little bit more nerve wracking because it could have been just as easily you or your family member.”

As of the writing of this story, nothing has really changed for the Kraken, other than media availability being held via Zoom. “There’s no new protocols at this time that are being introduced to the team,” coach Dave Hakstol said. “It’s just continued vigilance and trying to be as careful and as intelligent as we can in all situations, whether it’s at the rink, at home, or—as you know—on the road traveling. We’re doing everything we can to stay smart in that regard.”

NHL and NHLPA doctors are meeting with the league on Tuesday evening, so the possibility for new protocols is very real. Still, it sounds like the show will go on Tuesday in San Jose and Wednesday in Anaheim (again, we accept no jinx-related responsibility if any games end up getting postponed).

The Kraken will turn to Chris Driedger to tend goal against the Sharks, which will mark his first appearance since his second visit to injured reserve started two weeks ago. Driedger had played well and earned wins in consecutive starts against Florida and Buffalo, but said he felt another “tweak” in the last couple minutes of the game against the Sabres.

Those two outings were promising, as he had just started to show how he could theoretically fit in as a reliable 1B goalie. Let’s hope he can pick up right where he left off for the Kraken as he returns against the Sharks on Tuesday.

With Driedger playing in San Jose, the plan is for Philipp Grubauer to get the nod in Anaheim on Wednesday.

“Shark” line expected to stick together

With Alexander True recalled by the Kraken prior to Saturday’s overtime loss to the Columbus Blue Jackets, Hakstol formed a line of all former Sharks, as True skated between Donato and Joonas Donskoi. That trio is expected to stick together to start Tuesday’s game against San Jose.

Meanwhile, Jared McCann will again center the top line between Jaden Schwartz and Jordan Eberle (the Triple-J Line). That trio was successful through training camp and the early part of the season, but hadn’t spent significant time together since McCann landed on the COVID protocol list at the beginning of November. Reunited on Saturday, McCann did get Seattle’s first goal, assisted by Eberle, and Schwartz scored a goal off his backside, though that came on the power play and was assisted by Donskoi.

By the way, Donskoi confirmed on Tuesday that he did think he had scored his first goal of the season on that play. He added that his inability to find the back of the net has not had much of a mental impact on him, though, as he knows he’s getting chances and contributing offensively with assists.

San Jose turned heads at the beginning of the season, getting off to a red-hot 4-0-0 start. With a young roster and a terrible COVID outbreak of its own in the early stages, the team came back down to earth and has since had some ups and downs. The Sharks did have a stretch recently in which they won five games out of six, but they are a beatable opponent for the Kraken, who are desperate to start racking up some points against divisional foes.

Erik Karlsson has looked rejuvenated this season and has 10 points in his last 10 games. In all, the smooth veteran defenseman has 18 points in 22 games. Meanwhile, another resurgence has been happening in San Jose’s goalcrease, where James Reimer has surprisingly had a great season. The 33-year-old journeyman is 9-4-1 with a 1.98 goals against average and .937 save percentage. He gets the nod for San Jose on Tuesday.