Seahawks running back, and hockey fan, DeeJay Dallas has adopted the Seattle Kraken as his favorite team 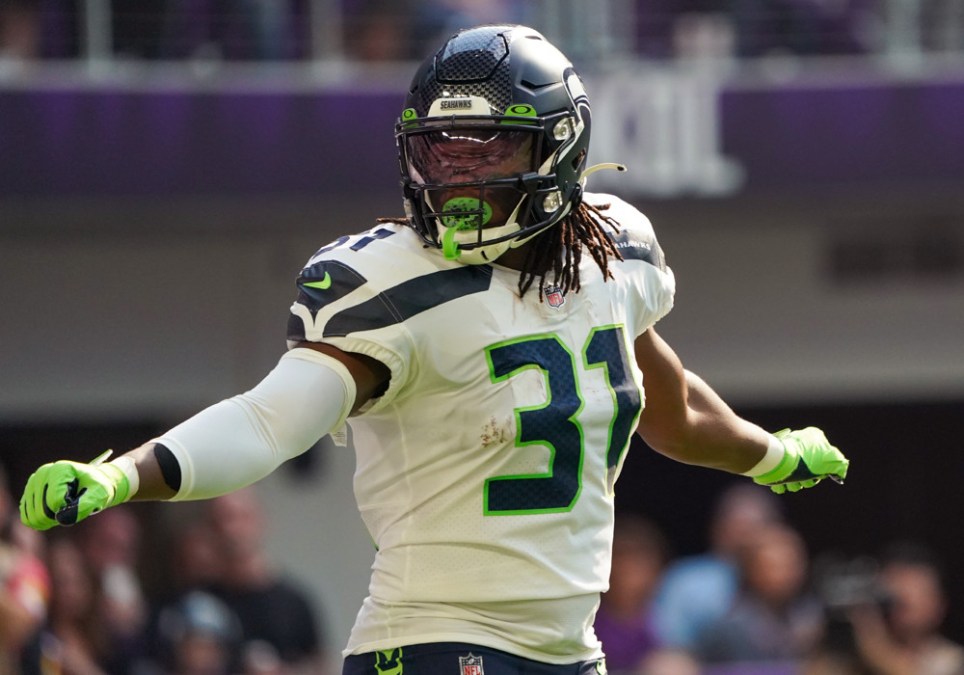 Prior to an early season Kraken game at Climate Pledge Arena, Seattle Seahawks running back DeeJay Dallas stood on a balcony high above the arena to hype up 17,000 hockey fans.

You couldn’t tell by his excitement that night, but the 23 year old was stepping outside his comfort zone a bit. He’s normally on the football field with the crowd looking down on him. But this time the roles were reversed, and the fans were all looking up.

“I’m kind of shy, a little bit,” Dallas says. “When I have my helmet on all the time the fans don’t really bother me, but when I have no helmet on and you can see my face then I’m just like ‘Oh, man.’”

Dallas wasn’t at the game for a promotion opportunity nor was he there jumping on the bandwagon of Seattle’s newest professional team.

“I like hockey,” Dallas said. “Hockey is fast and physical and reminds me a lot of our game.”

The Seahawks brought Dallas to Seattle in 2020 when they made him their fourth-round pick in the NFL Draft out of the University of Miami.

He’s in his second season with the Seahawks and has run for 172 yards on 51 carries with three touchdowns. Dallas can play on passing downs and has added 210 yards and another touchdown with 31 catches so far. He’s also a regular returning kickoffs for the Seahawks.

Growing up in Brunswick, Ga., Dallas discovered hockey at a young age by going to Atlanta Thrashers games. He says those games helped him to learn to enjoy the sport and become a fan.

“The Thashers left when I was six or seven, maybe a little bit later than that,” he says. “But once they left I became a Penguins fan. Sidney Crosby is the beast and they had [Marc-Andre] Fleury and everybody.”

He missed a chance to get to the game last Monday when the Penguins, and Crosby, were in town due to meetings with the Seahawks. But he was there the next game, sitting on the glass with his wife and son, cheering hard as the Kraken played the former Thrashers, the Winnipeg Jets.

Dallas was a Penguins fan, but he’s adopted the Kraken and gets to as many games as he can.

“I finally have a team that I didn’t inherit,” he says. “Like I feel like I can be a part of this team. I’m living in Seattle now being a part of the Seahawks. You always want to support the hometown team. So, I’ve become a Kraken fan and I think I’ll probably be a Kraken fan forever… it’s just so exciting to watch the guys. Me and some of the players have become friends and I just tell them all the time like ‘Man, y’all fly’ and it’s just amazing to watch.”

Dallas has not been on skates before, although there has been some talk of him doing something with the team where he does get out on the ice. That will undoubtedly be entertaining content. For now he’ll stick with being a fan, attending games, and supporting the club on Twitter.

When asked what type of player he would be, he quickly says he’d be a defenseman like Jamie Oleksiak who Dallas refers to as a ‘beast.’

He may want to be a defenseman, but it’s a certain forward that he’s adopted as his favorite Kraken player.

No word yet if his Seahawks teammates will start calling Dallas ‘Turbo,’ but watching him run the ball, there is a similarity.

Dallas says he’ll continue to attend Kraken games, sitting on the glass, when his football schedule allows for it. He appears on the team’s intro video each night and is part of the deafening din of Climate Pledge Arena.

“Kraken fans remind me a lot of the 12’s and the fan bases probably overlap,” Dallas says. “The fans from Lumen Field and Climate Pledge are a lot of the same people. It’s exciting.”