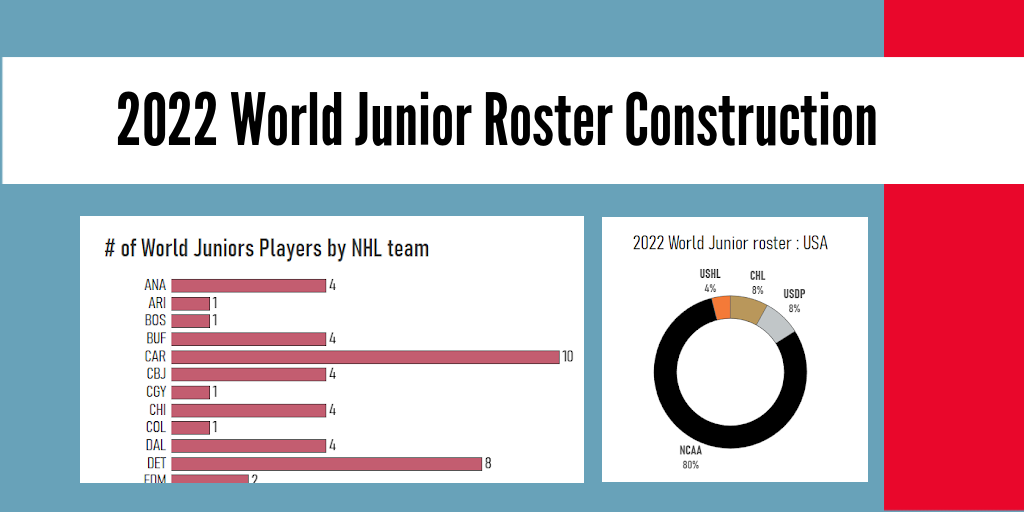 The IIHF World Junior Championship kicks off this week as the best players under 20 years old across 10 countries take the ice in Alberta for a two-week tournament. It is the pinnacle of hockey for this age group and quite literally will put the NHL’s future on full display.

I took a deep dive through the rosters to provide more context on how these teams are built and who you might want to keep an eye on in this year’s tournament. Enjoy.

There are 106 NHL-drafted players in the tournament this year, with 28 of those players selected in the first round. For comparison, last year there were 114 players drafted with 44 of them being first round draft picks.

As usual, Canada and the US have the highest number of NHL-drafted players on their teams, but this year Sweden is tied with the US for the second-most drafted players.

Carolina leads all NHL teams with 10 prospects in this tournament, followed by Detroit with eight. The Seattle Kraken have two drafted prospects playing in this year’s tournament, in Matty Beniers (USA) and Ville Ottavainen (Finland).

Only the New York Islanders and Tampa Bay Lighting have zero prospects playing in the tournament.

Here is a detailed breakdown with all drafted players, separated by NHL team.

Next, let us look at what are the most common leagues in which these players are currently playing.

I always enjoy looking at the contrast of the roster mix of the Canadian and US teams because it showcases each country’s hockey development approach. Team Canada tends to select most of its players from major junior/CHL hockey, while Team USA leans heavily on the NCAA.

Here is a breakdown by CHL league and NCAA conference.

I hope this gives you a deeper understanding of the rosters in this year’s tournament. If you have any questions, please let me know in the comment section or connect with me on twitter.