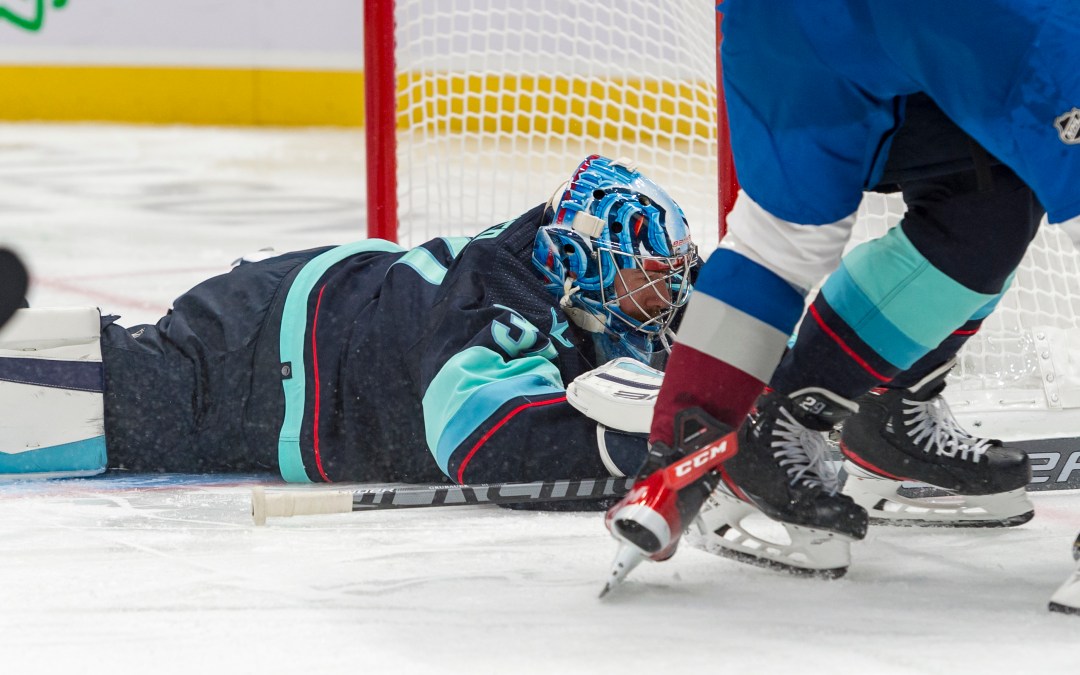 For two periods Monday it looked like Philipp Grubauer would be the belle of the Ball Arena in his return to Denver, but two third-period goals would give the Colorado Avalanche a 4-3 win against the Seattle Kraken.

After 40 minutes, Grubauer and the Kraken had built a 3-2 lead. The third period would be their undoing.

Nazem Kadri scored what would turn out to be the game winner at 14:17 of the third period. The play started with the Kraken letting the Avalanche skate through the neutral zone, creating an odd man rush, and was finished with Kadri beating Grubauer with a top-shelf shot on the short side.

“I think we played a decent game, in the first two especially,” Grubauer said. “I think we let them off the hook a little bit. Then in the last period they kept pushing. They’re a really good team at home. They’ve done it enough times. I’ve been at the other end where we came out in the third period and just crushed at a team, so I feel like that [happened] a little bit to us.”

Kadri added an assist, giving him points in 12 straight games, Nicolas Aube-Kubel scored twice for Colorado (21-8-2) who won for the fifth consecutive time and 12th in a row at home. Pavel Francouz stopped 23 Kraken shots in his third start of the season.

Grubauer made 31 saves for the Kraken (10-19-4) who have lost six straight for the second time this year. Jared McCann had a goal and an assist, as did Marcus Johannson.

“It’s about winning the hockey game, and we were in position to do that,” Seattle coach Dave Hakstol said. “We obviously did a lot of real positive things to put ourselves into that position. We’ll obviously address those and those are good things. There’s also two or three things that we have to address that cost us this hockey game when we’re in position to walk away with two points.”

How it played out

One of the things that Hakstol means to address with the team is odd-man rushes. They proved costly again on Monday and it started early.

At 5:50 of the first period the Kraken got caught without a third forward high in the offensive zone which gave the Avalanche a three-on-two rush. They cashed in as Aube-Kubel found the back of the net while Grubauer was run into by Carson Soucy. It was Aube-Kubel’s third of the season and second against Seattle.

The Kraken answered to tie the game at 1-1 thanks to a power-play opportunity. Jordan Eberle took a shot that Johansson deflected in for his third goal and first since Nov. 24.

McCann fired a shot from the half boards at 4:49 of the second period to give the Kraken a 2-1 lead. It was his 14th goal which matched his total last season with the Pittsburgh Penguins. The 14 goals tie his career high, and he did it in 15 fewer games.

“It’s a huge honor,” McCann said. “I’ve been getting a great opportunity here in Seattle. And it’s been awesome. I’m playing with some great players. I’ve got to give credit to a lot of my teammates.”

Seattle extended the lead to 3-1 at 14:20 when a Jamie Oleksiak shot was deflected in front by Colin Blackwell. Colorado brought it back to a 3-2 game on Aube-Kubel’s second goal when he knocked in a rebound off Grubauer’s pads.

The Avalanche made it 3-3 at 11:47 of the third when Devon Toews directed the puck off his skate past Grubauer for his seventh. The goal was reviewed by the officials and ruled a good goal as the referee said, “it deflected off the blue player.”

“I don’t know what the definition of kick in is,” Grubauer said. “You can answer that for me or maybe you can find an answer for me. I don’t know. But yeah, a lot of good things [tonight]. We got to build on that and get ready for Dallas.”

Overall, Seattle battled hard Monday and perhaps deserved a better fate. They held the high-flying Avalanche down for two periods, but ultimately the more talented team found a way. There are no moral victories, but the Kraken played one of their better games of late and will look to build off it as they head to Dallas on Wednesday.

“They’re a hell of a team,” Hakstol said. “I take nothing away from them in any way, shape, or form, but this is about us and that’s what we’ll really direct our attention to. There’s going to be a balance, you know, we’ll look at the good, look at the positives. Make sure we continue to talk about those and build off of those.

“But you have to directly look at a couple of the individual and systematic things that ultimately led to us losing the hockey game here tonight.”

Johansson filling in for Schwartz

With Jaden Schwartz out with injury, Johansson filled in on Seattle’s top line. Playing with McCann at center and Eberle at the other wing, Johansson ended the night with 14:41 of ice time, the power-play goal, and an assist.

He missed a couple of shifts in the third period after being shaken up on a play, but he returned shortly after to finish the game. At five-on-five the top line was on the ice for 9:13 of ice time and took 57.89% of the unblocked shots, created six scoring chances to four against, and ended the evening with 68.82 percent of quality shots.

+ With two points, McCann has five multi-point games this season, most on the Kraken.

+ Alex Wennberg came off of COVID-19 protocol Monday and played 11:37 of ice time.

+ The win Monday was the fifth in a row for the Avalanche, and in all five they erased a deficit.

+ Monday was also a homecoming for Joonas Donskoi who played the last three seasons with the Avalanche. Colorado thanked Donskoi and Grubauer with a video message.