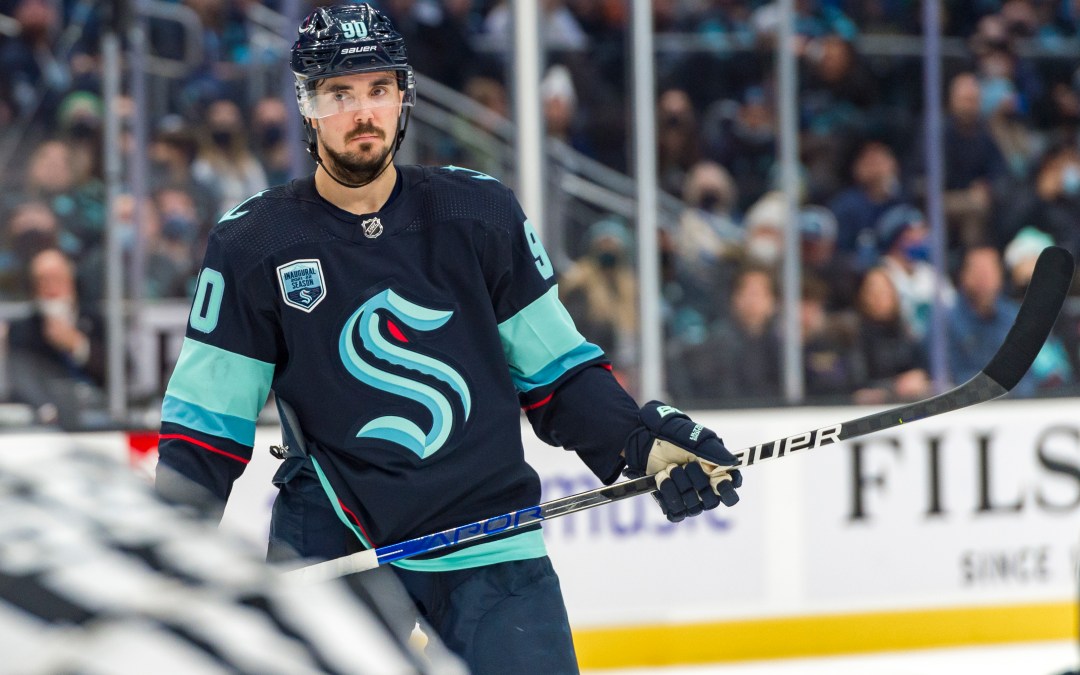 “Tough sledding” is a phrase often used by broadcasters to describe a game that is tight checking through the neutral zone. We aren’t entirely sure where it comes from in the real world, but in the hockey vernacular, if a game is “tough sledding,” we know there is little to no offense being generated at either end of the ice. Saturday’s game between the Kraken and the Kings was tough sledding.

It was especially tough sledding in the opening frame, when the two teams combined for a yawn-inducing 10 shots on goal. When the first horn sounded, we thought it might have been one of the more dull periods of hockey ever to be played at Climate Pledge Arena, ironic timing after the revelation of one of the coolest pre-game shows on the planet.

Of course, despite such minimal offensive output by either team in those first 20 minutes, the Kraken still managed to give up a goal in the first five minutes and were thus left chasing the Kings throughout the night.

Here are our three takeaways from Seattle’s ninth consecutive loss (ouch, it hurts to write those words).

Takeaway #1: Somebody score a goal, please

Let us tell you what is *not* part of the winning formula for the Seattle Kraken; scoring one goal per game. That’s what they’ve done in each of the last two, and it has happened in consecutive games where Chris Driedger has played well enough to win. We recognize Driedger had a questionable rebound that led to the first goal, and he called himself out in his post-game press conference for that one.

Still, two goals in a night is a very reasonable number of goals to allow. Somebody needed to put the puck in the net at the other end.

While this game felt similar to the previous game, the difference between this one and the one in St. Louis was that Seattle statistically had the better chances and possession against the Blues. On Saturday, that was not the case.

There just was not enough happening in the offensive end at five-on-five. Against the Kings, the Kraken attempted 41.67 percent of the high-danger shots at five-on-five and had just 38.18 percent of the expected goals for in that situation. Meanwhile, the Kraken only got 18 shots through to Cal Petersen in all situations, and that is rarely enough to win an NHL hockey game.

We asked Driedger if it’s frustrating to play in games like that, where he’s having a good performance, but the team isn’t scoring, and he unnecessarily fell on the sword.

“My job is to get wins and let in less goals than the other guy,” he said. “I haven’t been able to do that the last two matches here, so I definitely thought my game could have been better. I wasn’t happy with the first one. I think you can never be satisfied, especially in a time like now. We need to get to work and get out of this.”

Poor Driedger. Somebody get this man some goals.

While there doesn’t seem to be much happening for this team offensively at five-on-five, the Kraken have gotten surprisingly dangerous on the power play. There was a period between the losses against the Arizona Coyotes and Vegas Golden Knights earlier this season—two consecutive defeats that sent Seattle into its first long tailspin—when the Kraken were last in the league with the manpower advantage.

As of the writing of this story, the Kraken have climbed the power play rankings all the way to 17th in the NHL, with a success rate of 19.2 percent on the year. They’ve actually been one of the best teams in this regard over the last month or so.

Seattle scored another power-play goal in the second period on Saturday. Mark Giordano wristed a shot from the point that Calle Jarnkrok deflected. Petersen made a nice save, but Marcus Johansson was there and cleaned up the rebound.

The run of success got us wondering what some of the differences are between now and the beginning of the season when the Kraken weren’t even sniffing power-play goals.

A sign of a successful power play is when you see passes connecting through the seam, meaning those cross-ice passes that sneak between the killing team’s forwards and defense. Those types of passes don’t always work, and they don’t always lead to goals. But when they are connecting, you know the team on the power play is getting the opposing penalty kill to move around, creating openings. We’ve seen these passes a lot more frequently for the Kraken lately.

On the other hand, when a power play stinks, every pass is on the perimeter. We only saw passes around the perimeter at the beginning of the season.

Another piece is that the Kraken seem to have perfected a set play that gives them a reliable scoring look down low. The play starts on the half wall, usually with Jared McCann. He passes low to Johansson, who parks himself next to the net. Johansson one-touches it to Jarnkrok in the slot, who fires away. This is exactly how Seattle scored its power-play goal in Dallas on Wednesday.

We’ve noticed them trying this play often of late.

“We talk about different plays every game, about what’s there, what’s available,” Johansson said. “We try to build our power play, and it’s been pretty good. We had a chance in the end [Saturday] to tie the game up, and we didn’t. We needed to be a little bit better there, but we need to keep working on it.”

Having that option down low creates space in other areas of the zone. Opposing teams will learn that Seattle has this play in the bag and have to respect it. So, even when it doesn’t connect, the penalty killers will collapse down, which opens up… WHAT?! The seam pass.

Oh, and by the way, Seattle just missed a second power-play goal Saturday when McCann rocketed a one-timer off the post from the half wall.

Thank you for coming to our TED Talk. Now if only the Kraken could get this success to transfer over to five-on-five.

Aside from the mind-boggling show itself, one thing that was cool about that dry run before morning skate is that all the Kraken players came to the bench to watch it. When it was done, they all applauded, and it dawned on us that this was probably the first time they had ever seen any of the pre-game festivities. At that point on a game night, the players are in the tunnel waiting to step onto the ice, so they don’t really get to just stand around and enjoy the atmosphere.

The show did not disappoint.

The mysterious tentacle that had been conspicuously hanging in the rafters for several weeks was finally deployed, and new projections on the curtains over the windows to Tightwad Terrace displayed the eye of the elusive Kraken.

Awesome stuff. Congrats to friends of the Sound Of Hockey Podcast, Jonny Greco and Lamont Buford, as well as the many other talented folks who worked on the show, for getting it off the ground.