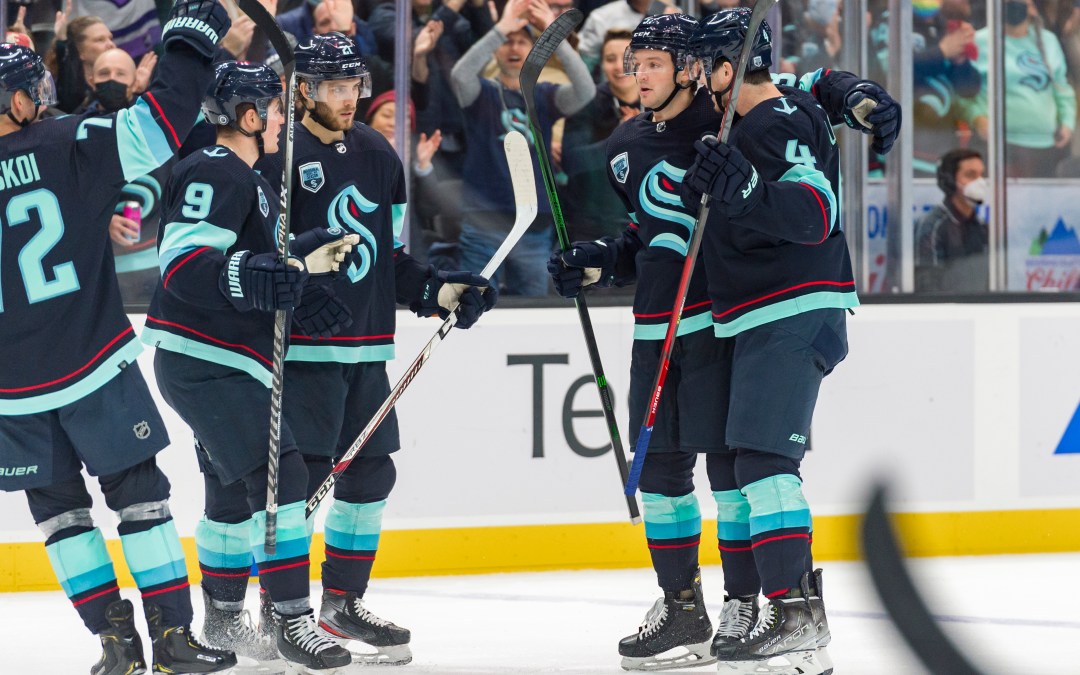 Can the Kraken extend their one-game winning streak against the San Jose Sharks this evening?

We’re trying something new here, folks, so let us know your feedback (i.e., what do you want to see here?)! We will start with a brief game preview and will build out this story as the game day goes on.

Check back regularly before, during, and after the game, and of course feel free to communicate with one another in the comments section. We really want to make this a place to engage, but please be nice! One team, one dream. We [heart emoji] you all.

Ok, let’s get into it. The Kraken are coming off their first win in a month against the Blackhawks on Monday. It was an absolutely thrilling game that Seattle dominated from the second period on, including in overtime. Marc-Andre Fleury was stellar, but the Kraken stuck with it and got the shootout win, with Philpp Grubauer playing well.

With Chris Driedger apparently still in COVID protocol—he did not participate in an optional morning skate and did not come up in coach Dave Hakstol’s media availability—Grubauer is the confirmed starter again, and we expect Joey Daccord to be the backup.

Morgan Geekie changed from a red non-contact jersey Wednesday to a regular white practice jersey Thursday. Hakstol was non-committal about his availability, but our hunch is that he will be in for the Kraken against the Sharks, being that he is no longer listed on injured reserve on the NHL’s media website. Meanwhile Alex True, who was bag skated with Haydn Fleury and Colin Blackwell, is no longer on the roster, so we assume he’s back on the taxi squad. That would also tell us that Fleury and Blackwell are likely scratches.

Ryan Donato was the star of the show for the Kraken against the Blackhawks on Monday, and something tells us he’s going to get a big opportunity Thursday against the Sharks. Remember, Donato played for the Sharks last season, but he was let go when San Jose did not extend him a qualifying offer.

Recently claimed forward Karson Kuhlman is expected to make his Kraken debut. We’re told he’s really fast, so that should be fun to watch. Hopefully that speed can help reinvigorate a forecheck that has lost some of its gusto since Brandon Tanev’s season-ending ACL injury.

The Sharks are 21-17-2 and have come back down to Earth a bit after a hot start to the season. Timo Meier set a franchise record with five goals Monday in a 6-2 win over the defensively stout Los Angeles Kings. Remember, the Sharks were the last team Seattle beat before going on its recent nine-game skid.

As you prepare for the game, familiarize yourself with Sharks rookie forward Jasper Weatherby, an outstanding young man who happens to have a lot of local ties. He was our guest on the latest Sound Of Hockey Podcast, and he gave a real treat of an interview.

We were incorrect about Donato getting a big chance tonight. Looks like he’ll be on the fourth line.

Pretty important update here… Others who have been bucketless in the past (Alex Wennberg, Vince Dunn, Riley Sheahan, Mark Giordano) were all wearing helmets for warm-ups.

The Sharks scored a whopping 38 seconds into the opening frame. Alex Wennberg made a tough turnover deep in the zone to Alexander Barabanov. Barabanov got it to Tomas Hertl, who put it in a largely open cage.

Not an ideal start for the Kraken.

The game-opening goal by Hertl was the only goal of the first period. The Kraken didn’t generate all that much offensively, but after a sloppy opening 10 minutes, they settled down and pushed back a little.

The Kraken leveled the score at 1-1 at 4:18 of the second period. The fourth line did some work down low. Mason Appleton passed to Giordano at the point, who went across to Carson Soucy. Soucy sniped while Sheahan screened.

Donato appeared to have notched his 10th goal of the season, when he buried an Appleton rebound with 13:12 left in the second. BUT… San Jose challenged for offside and got the call.

Minutes later, Soucy got his second of the game when a bouncing puck landed right on his stick in the slot. He quickly snapped it through Hill’s five hole, giving Seattle its first lead of the game at 2-1. Wennberg got the assist.

The Kraken had two consecutive power plays but failed to score. Giordano did fire a wrist shot off the base of the post that missed going in by about a centimeter.

With five minutes left, Soucy got into a tussle with Adam Raska in the corner behind Grubauer. It looked like Soucy and Raska were going to drop the gloves, but Giordano said, “Nah, I got this,” and fed some juicy knuckle sandwiches to Raska.

That was a pretty wild period. Grubauer made some big-time stops, including a breakaway glove save on Meier, who – might we remind you – scored FIVE (!!!) goals last game.

The Kraken expanded their lead to two when Geekie got a loose puck behind the San Jose goal. He drew two defenders to him and snuck a cheeky little pass through to Calle Jarnkrok in the slot. Jarnkrok confidently buried it for his career goal No. 100 at 6:27 of the third.

With the puck bouncing around and Jeremy Lauzon retreating, he couldn’t corral it, and Raska found himself on a partial breakaway. Recognizing he was in trouble, Lauzon hauled him down. Seconds into the ensuing power play, Meier scored his sixth goal in two games to make it 3-2 Seattle.

On the very next shift, Lauzon went right back to the box for high sticking. Seattle killed the penalty, but then IMMEDIATELY took a too-many-men penalty. They killed that one off as well, but not without some hairy moments.