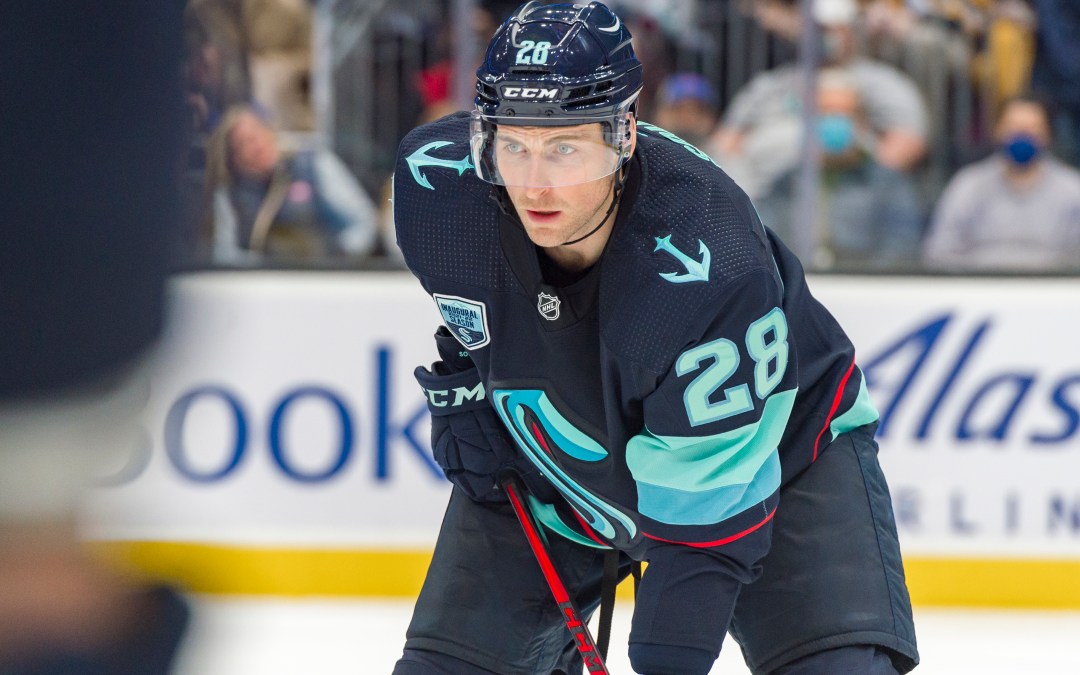 Is it the team puppy? Was Davy Jones the missing element for Seattle all along? After losing nine in a row, the Kraken have now beaten the Blackhawks and Sharks for two consecutive victories after the revelation of their new team dog on Monday. We *think* it’s a coincidence, but we can’t rule out this recent canine introduction as the reason for this week’s newfound success.

Thursday’s victory was not a pretty one at all. The Kraken came out flat and looked downright sloppy in the opening 10 minutes. But to the team’s credit, Seattle turned it around in the second and got scrappy down the stretch to pull out the ‘W.’ They also got good goaltending for the fourth game in a row—two of those were by Chris Driedger and two were by Philipp Grubauer—despite putting Grubauer behind the eight ball with an early defensive gaffe that hung him out to dry.

Not every win is pretty, though, and winning ugly is a heckuva lot more fun than winning pretty, which Seattle has done far too often this season. Here are our Three Takeaways from a 3-2 Kraken win over the Sharks.

Takeaway #1: Kraken play with fire, but find a way to win

Aside from giving up a goal to Tomas Hertl 38 seconds into the game after an ugly Alex Wennberg turnover, the Kraken did some things in the third to put themselves in grave danger of throwing away a late two-goal lead.

Nine minutes into the third, a bouncing puck hopped over the stick of Jeremy Lauzon as he was retreating and in a footrace with 20-year-old Adam Raska. Raska came up with it and found himself on a partial breakaway. Lauzon did the right thing by hauling him down, but Timo Meier scored his sixth goal in two games 37 seconds into the ensuing power play.

Freed from the box after the goal against, Lauzon was back on the ice for just 32 seconds before he high-sticked Matt Nieto and put his team shorthanded again. This time, the penalty killers were successful, only to be forced right back into action for the third time in a row when Seattle took a too-many-men penalty. [Insert facepalm emoji here].

We’ve been Lauzon defenders all season long. We like his game more than a lot of fans seem to, and it’s ok that some of you disagree with us. But with the way the defense carousel has twirled around this season, it does seem like whichever blueliner makes the most egregious mistake on a given night sits the next night. We are curious to see what Hakstol does with his D-corps on Friday, especially if Jamie Oleksiak is able to return after missing Thursday with a non-Covid illness.

Anyway, back to the game… Just when we thought the Kraken were out of penalty trouble, Mason Appleton got his stick into the midsection of Alexander Barabanov with just over a minute left in the game and the San Jose net empty. Barabanov appeared to fall on his own, but in real time, the official thought he had fallen because of Appleton’s stick. He called the fourth penalty of the period against the Kraken, and the game fittingly ended with the Sharks on the power play.

Appleton argued with the official all the way to the box. Comically, the ref announced the penalty, then failed to turn off his mic before shouting, “Sit down!” at Appleton.

“I like the mentality that guys were able to just put all that aside and just go and do the job on the kill,” coach Dave Hakstol said after the game. “So that was a big piece of the game.”

In all, the Kraken gave the Sharks five power plays on the night. That’s a lot anyway, but when four of those are in the third period with your team leading, it makes your life unnecessarily difficult.

Still, the boys found a way for the second game in a row. After a month of finding ways to lose, that feels pretty good.

“You gotta find ways to win,” Hakstol said. “We had a complete 65-minute win a couple nights ago. Tonight we found a way. We scratched and clawed, guys did a bunch of little things.”

We love the little delay by Geekie to wait for the defenders—one of whom certainly should have stayed in front—to draw toward him and open up a little window. It’s also a great finish by Jarnkrok, who continues his impressive play after a really tough couple of months to start the season.

Carson Soucy provided the rest of the scoring, including Seattle’s first goal, which was set up by a fourth line of Appleton, Ryan Donato, and Riley Sheahan. That same fourth line appeared to score another goal when Donato rifled home an Appleton rebound, but it was waived off after a successful coach’s challenge for offside.

It was the first two-goal game of Soucy’s career, and it earned him No. 1 star honors. Still, the always humble Soucy downplayed the accomplishment after the game. “I’d say it’s up there, with the two goals,” he said on where it ranks in career moments. “The win helps. We’ve still got a lot of work to do, so that’s still kind of in the back of your mind, knowing we have a game [Friday].”

Said Hakstol, “You have to have contributions from everybody in your lineup. Whether it’s a guy like— tonight, Souce scoring two.

“It’s interesting, we had a good chuckle this morning. [Mark Giordano] I think holds the record for the guy that had the longest time between two-goal performances, nine years and nine days, and tonight it was a guy that sits a couple stalls down from him that got two. Souce did a good job.”

Takeaway #3: This Giordano guy could be captain material

While he may hold the record for longest drought between two-goal games, Giordano showed why he’s so beloved and respected around the NHL on Thursday.

He got the primary assist on Soucy’s first goal. Then when Raska was mixing it up with Soucy later in the second period, and it looked like those two were about to fight, Giordano jumped in and took the much younger Raska (at 20 years old, Raska is literally 18 years younger than Giordano) to task.

Perhaps his most impactful play of the game, though, came with just six seconds left on the clock. With the Sharks net empty and the Kraken desperately trying to kill the bogus Appleton penalty, the high-scoring Hertl got the puck—and game—on his stick in the right circle. Giordano stepped into the shooting lane and deflected Hertl’s shot up out of play.

After the game-saving block, Grubauer came out of his crease to give his captain a thankful shoulder bump.

“When your captain’s out there fighting, blocking shots, and doing everything, that shows how much he cares about getting a win this building,” Hakstol said.

The Kraken will look to extend their win streak to three when they go right back to work Friday against the St. Louis Blues.