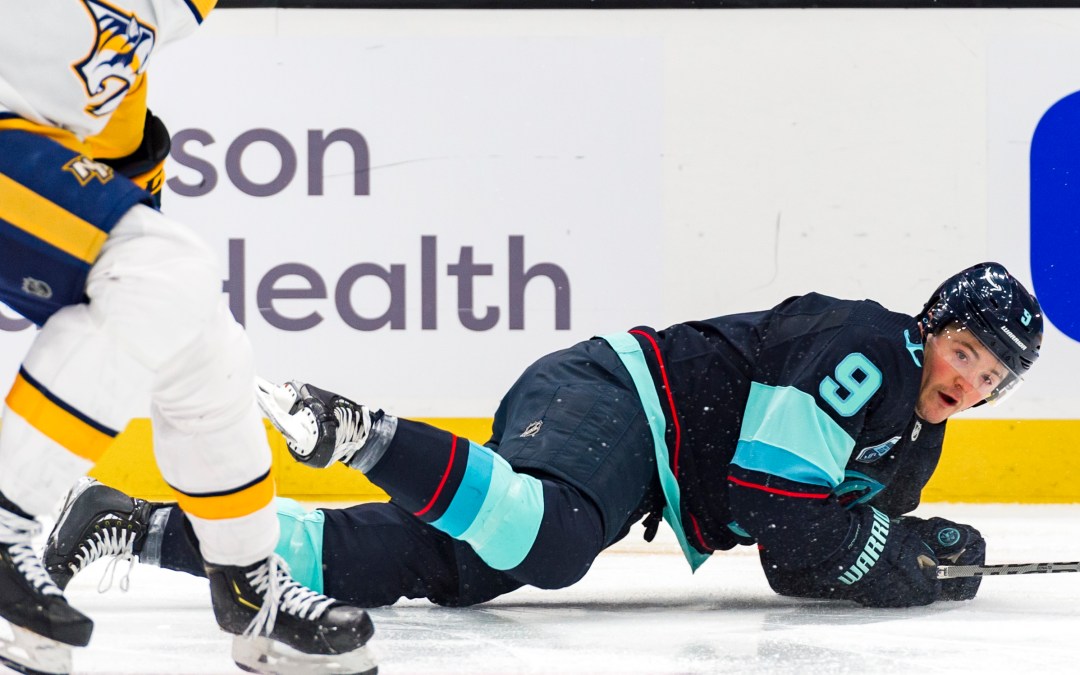 Kraken game ops pulled out all the stops Tuesday, but it still wasn’t enough to take down the Nashville Predators. Not only did team dog Davy Jones bring a couple of his cutest puppy friends to the game, there was also a team-sponsored wave during a TV timeout (not sure how we felt about that), and—perhaps most importantly—Brandon Tanev “released the Kraken” as part of the pre-game show.

To Seattle’s credit, the team did come out looking good in the first period and even scored the opening tally, a rarity for this group, but the Predators took advantage of more of their chances than the Kraken did.

The 4-2 defeat is a disappointing outcome, as that’s the end of what could have been a very positive six-game homestand. Instead it ends with Seattle posting a mediocre 3-3-0 record. It is also the last time the Kraken will play at Climate Pledge Arena until Feb. 9, so a victory would have been a nice way to close out this stretch.

Anyway, here are our Three Takeaways from Tuesday’s Kraken loss to the Predators.

Kraken goalie Philipp Grubauer entered Tuesday’s game riding high after three consecutive wins. He looked dialed in early, confidently kicking out several shots off good chances from the Predators. But things turned for him a bit with 21 seconds left in the first period when Luke Kunin beat him with a slapshot from the top of the left circle.

You never want to give up goals in the first or last minute of a period, as those just seem to have more of an impact on the team’s psyche than goals against in the middle of a frame. That particular marker was extra tough because Seattle was about to close out a good first period with a 1-0 lead.

“We had a great period,” coach Dave Hakstol said. “We put ourselves in position to win the first period, and it’s a nothing play.”

Then in the second, with the Kraken back in front after an Adam Larsson goal, Filip Forsberg showed why he’s an elite scorer. After skating the puck almost the length of the ice, he let a shot go from outside. It beat Grubauer clean, though there was no traffic in front of him.

Now, there are two schools of thought here. One is that Grubauer probably should have had it, being that it’s one guy with no option to pass, there’s no screen, and the shot comes from distance and an angle. The other way to look at it is that Forsberg is an awesome player and made a perfect shot.

We’re somewhere in the middle on this one. Yes, the situation would indicate the goalie should make the save, but holy cats that’s a laser.

Hakstol was a bit harder on Grubauer in his post-game presser than we expected, being that Grubauer had just played three outstanding games in a row before this one, and even Tuesday wasn’t a *bad* game, per se. He really did make some excellent saves against Nashville, especially in the first period.

Hakstol is apparently on team “he should have had it,” though. Here’s what he said about Grubauer’s performance:

“He had some good saves early in the hockey game. There was one more in the third that was from a rebound from the slot. But the first goal, it’s a tough time and it’s a tough one— you know, he’s got to stop that. Second one as well. He’s facing a good shooter, but it’s from the outside there, so those are things that can push a team back on their heels. So, not his best. He’ll need to be better in Pittsburgh a couple nights from now.”

So, that was interesting.

Hakstol did later add, “I’m not mincing words. I mean, Phil’s played really well the last… three or four games, and tonight—like I said—he’ll do better in Pittsburgh.”

Takeaway #2: Jared McCann back to scoring, but Jordan Eberle is squeezing his stick

The Kraken got the luxury of an early five-on-three advantage when the Predators took two penalties within three seconds of each other. Seattle strung together several good looks in a row before Jared McCann one-timed a Mark Giordano pass by Juuse Saros. That shot was so hard, we could have sworn we heard the puck make contact with the net all the way up in the press bridge.

It was McCann’s first goal in seven games, despite getting oodles of chances to score over that stretch.

Meanwhile, his linemate, Jordan Eberle, has not found the back of the net since Dec. 6. Those two are the top scorers on the team, so having them both in a slump at the same time has been damaging for Seattle.

Getting the proverbial monkey off McCann’s back should hopefully open the floodgates again for him. As for Eberle, he was getting some great looks Tuesday, including a partial breakaway early where he caught a pass, stickhandled between his legs, and shot. Saros made a nice save on that one, but for the most part, it felt like Eberle was trying to make one last move, rather than quickly pulling the trigger when he had chances.

These are things that players do when they’re pressing. They try to make the perfect move to put themselves in the perfect position to score, rather than simply shooting when they have the chance.

“Hockey’s a weird game,” McCann said. “Sometimes you’re hot, sometimes you’re cold. I’ve gone through in my career just trying to figure out what works for me. I’ve had guys talk to me that have scored a lot of goals in this league and they don’t change a thing. They just keep going, and eventually they’re going to break through and go in for you.”

Takeaway #3: That was a weird game

This was a hard game to reconcile because the Kraken statistically outshot and out-chanced the Predators, but it just didn’t *feel* like Saros was under all that much duress during the course of the contest, especially beyond the first period. Perhaps that is a sign of a goalie that has things really locked down, but it was a bit surprising to see the stats from that game, based on what we had watched.

The Kraken now embark on a four-game road trip, then go right into the All-Star break.