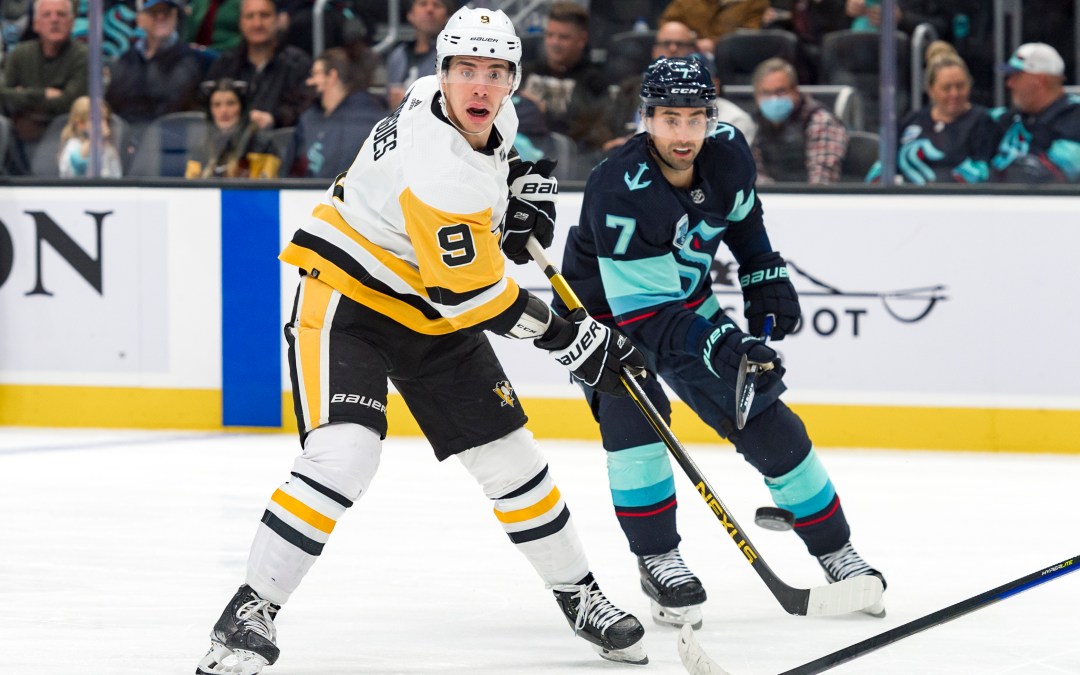 Welcome to the SOH Liveblog for Kraken at Penguins. We will update this article throughout the game day, so check back often.

The Kraken begin a tough four-game road trip on the east coast Thursday against a Pittsburgh Penguins team that took them to the woodshed the first time these teams met.

The setup for this trip is odd. Seattle plays Thursday, then has back-to-back early matinee games against the two New York teams on Saturday and Sunday and closes it out with a night game on Tuesday in Boston. These four games in six days will lead right into the All-Star break.

This first game of the trip is daunting, especially considering the very brief history between these two clubs. When the Penguins visited the Kraken at Climate Pledge Arena on Dec. 7, Pittsburgh scored three goals in the first 5:07 of the game and sent Philipp Grubauer to the bench after just four shots. It was one of those nights where Grubauer couldn’t seem to stop anything thrown his way.

When the dust settled, Jake Guentzel had two goals, an assist, and an injury, and the Penguins had marched to an easy 6-1 win.

Dave Hakstol confirmed in his morning press availability on Thursday that he would deploy the same lineup as Tuesday when the Kraken lost 4-2 to the Nashville Predators. That night, Morgan Geekie was the healthy scratch from the forward group, so this will be the second consecutive time the young forward will be held out.

Chris Driedger officially exited COVID protocol after a long stint there and will back up Grubauer on Thursday. Driedger participated in morning skate before Thursday’s game but was not officially cleared yet, so Joey Daccord was still on the bench for the game against the Preds.

Can Jordan Eberle get the monkey off his back?

Jared McCann scored Tuesday for the first time since Jan. 12 with a howitzer during a five-on-three power play. His linemate, Jordan Eberle, has been in an even deeper rut and has not found the back of the net since Dec. 6, which was ironically that 6-1 loss to these very same Pittsburgh Penguins.

Eberle had some great chances on Tuesday, but seemed to be trying to make one last move before pulling the trigger against Juuse Saros.

“That’ll turn around for him,” Hakstol said of Eberle’s scoring drought on Thursday. “When you look at the number of opportunities that he’s continuing to get, he’ll find the back of the net again. We’re confident in that, but for us, it’s not about one guy, one line or two lines. It’s not a luxury to have contributions from throughout the lineup, it’s an absolute necessity.”

March of the Penguins

The Penguins have won six games in a row, so… they’re due for a loss, right?!

They are currently in second place in the Metropolitan Division with a 27-10-5 record. Tristan Jarry is expected to start in net for the Penguins against the Kraken. He is having an outstanding season and has posted a 23-7-4 record with a 2.12 goals against average and .926 save percentage.

With Driedger cleared from COVID protocol, Joey Daccord has officially been assigned to the taxi squad.

It was a good road period for the Kraken, who didn’t give up much to an outstanding offensive team. Chances were officially pretty even, and Grubauer made a few solid stops, especially during a Karson Kuhlman penalty.

Here was the biggest play of the period:

Ok, but seriously, holding the Penguins off the board for the first 20 minutes is a win for Seattle.

The tight-checking feel of this game continued well into the second period. Grubauer kept it scoreless thanks to a massive sprawling save on Jeff Carter off a two-on-one just beyond the nine-minute mark.

The Kraken got penned in for what felt like an eternity, as Pittsburgh took advantage of the long change and Marcus Johansson playing without a stick. Grubauer made four or five big stops to keep the score 0-0 on what felt and looked like the Penguins were on a power play (to be clear, they were not).

In all, the Kraken were outshot 9-2 in the frame, but Grubauer kept the boys level through two periods.

The Kraken got one of their best chances of the game when Eberle passed to Johansson on a two-on-one, and Johansson went hard to the net. He missed the net with his shot and ran Jarry over in the process, earning himself an unfortunate penalty.

Jarry made a couple fabulous saves on Donato and Eberle before Jared McCann finally broke through against his old team, deflecting a Vince Dunn shot to tie the game 1-1.

In the final minute, Grubauer made a big save at one end, then Joonas Donskoi hit the outside of the net at the other end after finding a loose puck in the slot.

To overtime we went.

Alex Wennberg has taken plenty of heat from fans this season for passing up opportunities to shoot. In a lot of cases, the frustration has been justified, but in Thursday’s overtime period, he pulled up off a rush and dished to Adam Larsson. Larsson buried it and gave Seattle its first ever win in three-on-three overtime.

…And that, folks, is how you beat an elite team on the road. Great defensive structure, great goaltending, opportunistic goaltending. Boom. Kraken win.

More to come! Check back often!