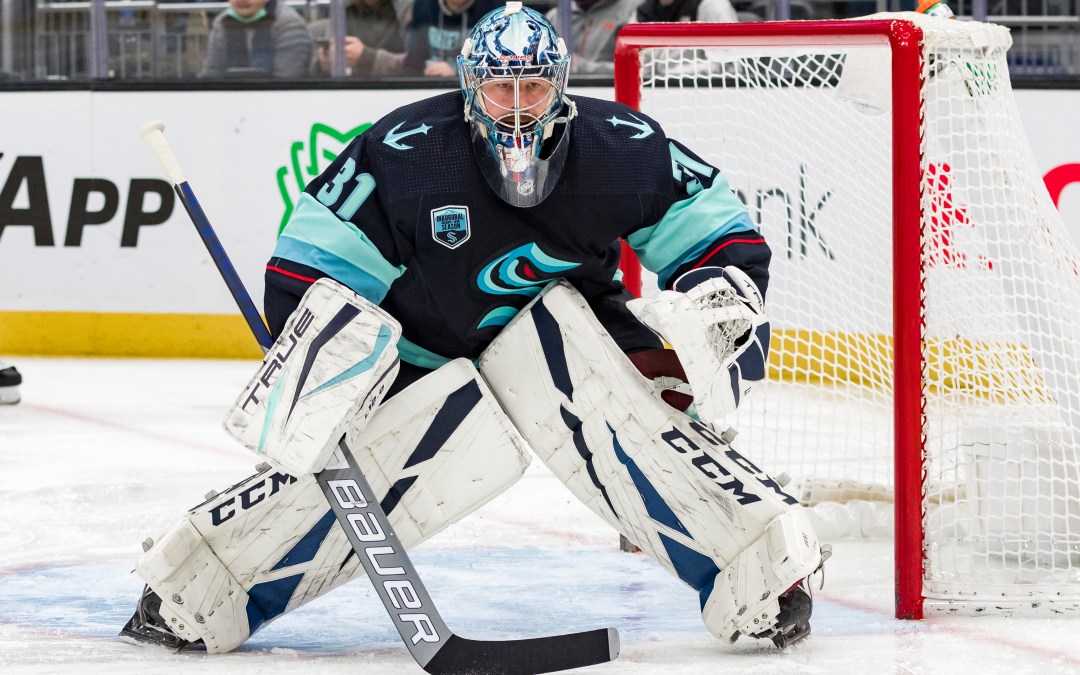 Philipp Grubauer stared down Pittsburgh Penguins goalie Tristan Jarry in a classic duel that ended with the Seattle Kraken winning in overtime for the first time in franchise history, 2-1 at Pittsburgh’s PPG Paints Arena Thursday night.

Adam Larssson won it for the Kraken at 1:17 of overtime when he came off the bench, got a pass from Alex Wennberg, and beat Jarry from high in the slot.

But the hero for the Kraken was Grubauer. The goalie kept his team in the game making 23 saves and continuing his hot play of late.

“Great job by everybody” Grubauer said. “We were playing really tight, didn’t give them a lot of room to make plays like other games. As long as you keep that at 0-0 you have a chance. Once they got that goal we went right back at it. I think we had games where we didn’t come back after giving up a goal. Tonight everybody did a good job.”

The two teams battled through the first 40 minutes on Thursday with neither goaltender blinking. Jarry was just as tough as Grubauer and ended the night by stopping 27 of 29 Kraken shots.

Pittsburgh went ahead at 8:41 of the third period when Evgeni Malkin made it 1-0 with a power-play goal on a wrist shot from between the circles and past a screened Grubauer.

The Kraken pushed from there, outshooting the Penguins 18-4 in the third period, but could not solve Jarry. After two failed power play attempts Vince Dunn lifted a shot from the point at 16:04 that was tipped past Jarry by former Penguin Jared McCann to tie the game and force overtime.

“Dunner is a great defenseman, I know he’s going to make a play, just tried to get my stick on it,” McCann said. “[Marcus Johansson] made a play there, got it back to Dunner.”

It was the second straight game with a goal for McCann who is two away from his career high of 19.

“It’s a good win in this building, it’s a hard place to win,” Kraken coach Dave Hakstol said. “For us it’s an enjoyable win but one that we worked for. Our game didn’t change a whole lot from the drop of the puck to the game winner in overtime… We pushed a little bit in the third period without any risk to our game and that’s a good characteristic to our team.”

Grubauer won the game on one shift in second period

As solid as Grubauer was all night, it was one shift with about four minutes left in the second that may have swung the game.

The Penguins hemmed Seattle in its own zone for over two minutes. Johansson broke his stick early in the shift rendering him nearly useless to help get the puck out. Pittsburgh had Malkin and Sidney Crosby on the ice and turned the Seattle zone into a shooting gallery.

The Kraken could not corral the puck to clear, but Grubauer stayed steady.

“Guys were blocking shots like crazy,” Grubauer said. “Getting in shooting lanes and letting me see the puck by boxing out guys, knowing where their forwards are… I think it’s building over the last couple games at home. Last game wasn’t our best one, but I think since we’ve come out of Christmas break, we’ve been playing our game, and everybody is buying in.”

Johansson ended up on the ice for a three-minute shift and Mark Giordano for 2:26. It was an incredible stretch and logic says that the Penguins should have scored.

Grubauer wasn’t just good there. He made saves in tight all night, including a stop on Jeff Carter midway through the period.

The past two chances the Kraken have had in overtime they’ve played well. Against the Chicago Blackhawks on the recent homestand, they dominated overtime, hit a post just before it ended, and got the win in the shootout.

“Over the break we had a chance to talk about how we want to manage the overtime,” Hakstol said. “Just try to manage our shift lengths, not try to force things, and take what the game gives you until there’s a breakdown. We got that on the game-winning goal.”

The talk over the break has created results and raised the confidence level.

McCann started the overtime and nearly scored on the first shift.

“We’re going to get one,” McCann said about what he was thinking just before the face-off. “We’re due. It was a good team effort, we played well, played to our strengths and we’ve got to build on this.”