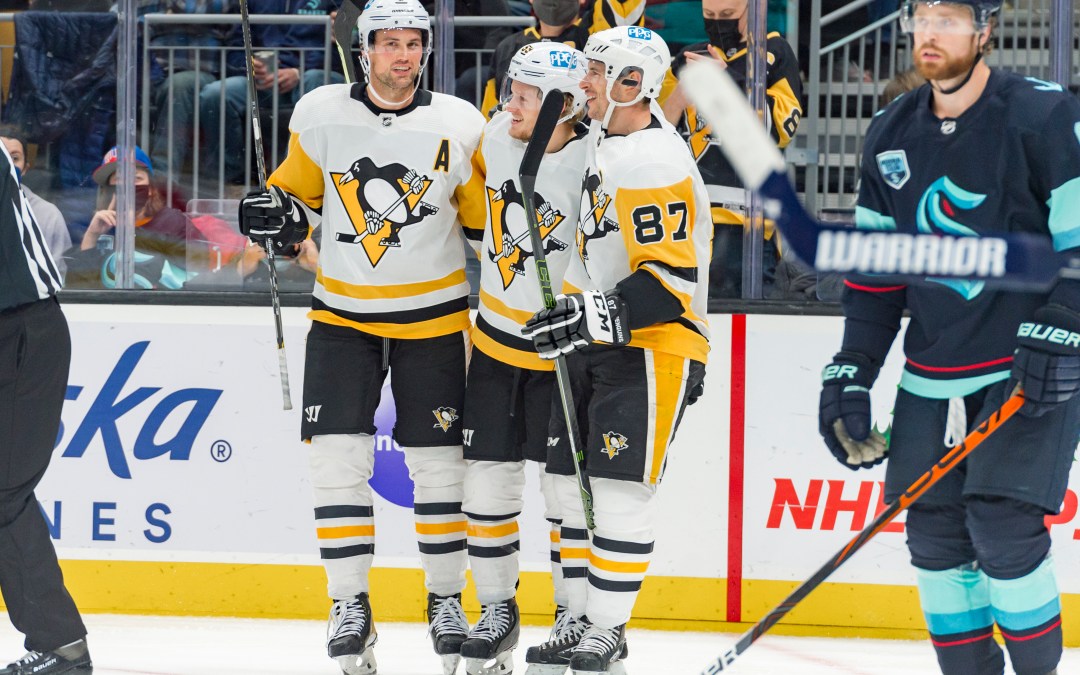 The Seattle Kraken find themselves in Pittsburgh Thursday for a tough road matchup against the Penguins. Pittsburgh has been playing well with a 27-10-5 record which is good for second place in the Metropolitan Division, one point back of the New York Rangers.

Pittsburgh is especially tough at home where it has a 13-5-2 record, meaning the Kraken have their tentacles full Thursday night.

Philipp Grubauer will start again for the Kraken, and he’ll be up against Tristan Jarry who is in the middle of a great rebound season. Jarry struggled in the playoffs last year, earning the ire of the fans and local media; it’s hard to believe fans would blame the goalie, but there it was.

This season, Jarry has gotten his skates under him and comes into Tuesday with a 2.12 goals-against average and .926 save percentage. Oh, and his record is 23-7-4 which is not too shabby. Seattle needs to get traffic and shots on him to stand a chance.

This is the second meeting of the Penguins and Kraken

Back on Dec. 6, the Penguins came to Climate Pledge Arena and scored three times in the first period to skate away with an easy 6-1 win.

Pittsburgh played that game without Evgeni Malkin who was rehabbing an injury. He’s been been back now for eight games and, of course, has nine points. With Sidney Crosby playing like Sidney Crosby, Malkin’s return makes the Penguins that much tougher.

“I think Geno’s getting better with every game that he’s played,” Penguins coach Mike Sullivan said Thursday. “He missed a lot of time, that’s not an easy challenge for any player coming back into the lineup. I give Geno credit for how hard he worked… his timing, his conditioning, just the intensity of an NHL game is difficult to simulate.

“I do think he’s getting better. You can see the impact he has on our team, particularly offensively with his instincts. We really like where we’re trending and we’re a much more difficult team to play against with him in the lineup.”

Just what the Kraken want to hear.

Other Penguins to watch

Your eyes are naturally drawn to Crosby and Malkin when Pittsburgh is playing, but their attack comes from more than just the two of them.

Up front, Evan Rodrigues has had a breakout season with 15 goals and 32 points. Jake Guentzel is having another strong season and leads the team in goals (21) and points (40).

On the back end, Kris Letang is killing it this year and has 37 points. Seattle needs to be aware of him joining the rush and make sure they keep a third man high in the offensive zone to prevent odd-man chances.

Some Penguins odds and ends

Pittsburgh can score. The Penguins are averaging 3.4 goals per game and the third period has been their most productive period from a goal scoring aspect.

With all the firepower they have, surprisingly they’re not dominant on special teams. Their power play is 23rd overall, and at home it’s been 28th in the league with a 14.9 percent success rate. Of course, that doesn’t mean you want to give Crosby, Malkin, et al a ton of chances with the man advantage.

They’ve won eight in a row at home, which it seems like every team the Kraken have played on the road of late has done, making Thursday’s night game just a bit more daunting.